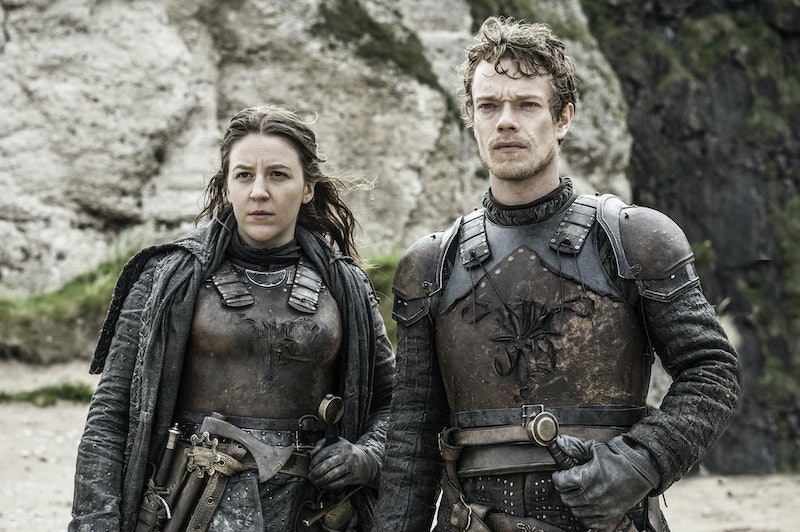 Game Of Thrones Season 7 is entering its highly-anticipated endgame, given that Season 8 has officially been announced as the show's last. So we better start preparing for some hard goodbyes by acknowledging the Game Of Thrones characters who could die in Season 7. The HBO series is notorious for being unsentimental when it comes to killing off major characters, and that's unlikely to change now that the finish line is in sight; in fact, it's only likely to accelerate — we've already lost a couple major players in the first three episodes of Season 7.

Fortunately, we already know that Sansa won't die in Season 7, thanks to Sophie Turner's loose lips. I'm also going to go ahead and make the gutsy prediction that Jon Snow, Daenerys Targaryen, and Tyrion Lannister are all safe until the final season. But that still leaves plenty of potential victims for the next batch of episodes. So without further ado, here are your 18 Most Likely To Kick The Bucket In Season 7:

This conniving character's got to get his comeuppance sooner rather than later, right? It would be supremely ironic (and satisfying) if, after six scenes of behind-the-scenes maneuvering, the moment he emerged from the shadows to openly declare himself a contender, he was immediately struck down.

This likable outlaw-turned-knight has cheated death so many times I've lost count. It's bound to catch up with him sometime, right? Next time Jaime Lannister comes to him with an offer of a swashbuckling adventure, he should probably politely decline.

Technically, the Mountain is already dead. But that doesn't mean he couldn't be killed again — preferably by his own brother in the long-awaited Cleganebowl.

This fan-favorite character delighted fans by returning from the grave in Season 6. However, that doesn't necessarily mean he'll be sticking around for long. I just hope he survives long enough to confront his brother before his death.

The newly-crowned king of the Iron Islands and his imposing Iron Fleet is the last great test that stands between Daenerys Targaryen and reclaiming her homeland. If the final conflict is going to be between her dragons and the White Walkers, surely she must dispose of Euron before Season 8 begins, right?

Theon has gone a long way towards redeeming himself — if that's even possible — by helping Sansa escape Ramsay's clutches, defying his tyrannical uncle, and making a pact with his sister to help Daenerys. Of course, as soon as rehabilitation is complete, it'll be time for him to kick the bucket.

It must be said that those who align themselves with Daenerys actually have a fairly good shot at survival; of her loyal advisers, only Ser Barristan has bit the dust. But things are only going to get deadlier as she sails for Westeros, and her newfound ally could be a casualty of the impending war.

It's almost impossible to imagine Game Of Thrones without Cersei; but the sheer fact of how shocking it would be to see her die before the show reaches its final season is exactly why it might be possible. Taking the Iron Throne for herself has only put a giant target on her back. Ever since she helped kill Robert, no one's held onto it for long.

If, as many theorize, Jaime is the one who will Cersei, will her really live for long after he's done his deed? If Cersei dies in Season 7, her twin likely won't be far behind, either by his own hand or by her loyal Queensguard.

The Red Woman somewhat unexpectedly avoided Ser Davos' wrath and survived to be exiled by Jon Snow. What's next for the sorceress remains to be seen… but she once promised Arya they would meet again, and with the fledgling assassin on the loose in Westeros, Melisandre might not be long for this world.

Dragonscale may not be his biggest threat anymore, but this is still Game of Thrones and no one is safe. Hopefully he gets a chance to do one last noble deed in his beloved Khaleesi's name before he shuffles off his mortal coil.

If the writers wanted maximum emotional impact without sacrificing a main character, then I'm sad to say that killing young Podrick would be the way to go. He's been a stalwart presence on the show ever since he was Tyrion's squire, but one of these days he's bound to get tangled up in a mess he can't get out of.

The mother of the Sand Snakes may have formed a promising alliance with the Queen of Thorns against Cersei… but you saw what happened the last time someone tried to take down the Lannister queen. (Spoiler alert: it involved lots of wildfire and lots of people dying.)

With his liege lord Stannis dead and his beloved Shireen gone too, Davos is somewhat adrift in the story. It's been nice to see him advising Jon Snow for a bit, but characters should beware once they've outlived their narrative usefulness.

With Robb long dead and Rickon killed last season, the Stark brood is starting to dwindle — and I'm afraid the family is only going to get even smaller by the end. With Sansa safe and Jon likely to live through Season 8, the fates of the younger two Stark siblings are in question. Will Arya's assassin-ing put her in harm's way this year?

Once Bran delivers the news of Jon's true origins to his older half-brother, than he'll have a concern similar to Davos: he'll have fulfilled his narrative obligations and will thus be primed for the chopping block. He better develop some kickass magical powers that will render him important to the show's endgame, and quickly.

Poor Edmure. He's been a captive of the Freys ever since the Red Wedding way back in Season 3. At this point, I hope they kill him just to put him out of his misery.

Like Littlefinger, Varys has excelled at being a behind-the-scenes maneuverer; but as he pushes Daenerys and Tyrion into war against Cersei, he may find himself in the crossfire of the war he himself helped to start.

Apart from these 18 potential victims, there are undoubtedly plenty of minor characters and supporting players scheduled to meet their maker this season on Game Of Thrones. Unfortunately, with no source material to go off of anymore, we'll have to wait until Season 7 reveals exactly who else is biting the dust. Maybe have some tissues ready just in case.

More like this
Does 'Locke & Key’s Ending Mean There Could Be A Season 4?
By Sophia Moore
Netflix Just Rebooted A Classic ‘90s High School Drama
By Maxine Harrison
Everything To Know About 'RHOC' Season 17
By Brad Witter and Sophia Moore
‘Stranger Things’ Stan Megan Thee Stallion Grilled Natalia Dyer About Nancy & Steve
By Brad Witter
Get Even More From Bustle — Sign Up For The Newsletter