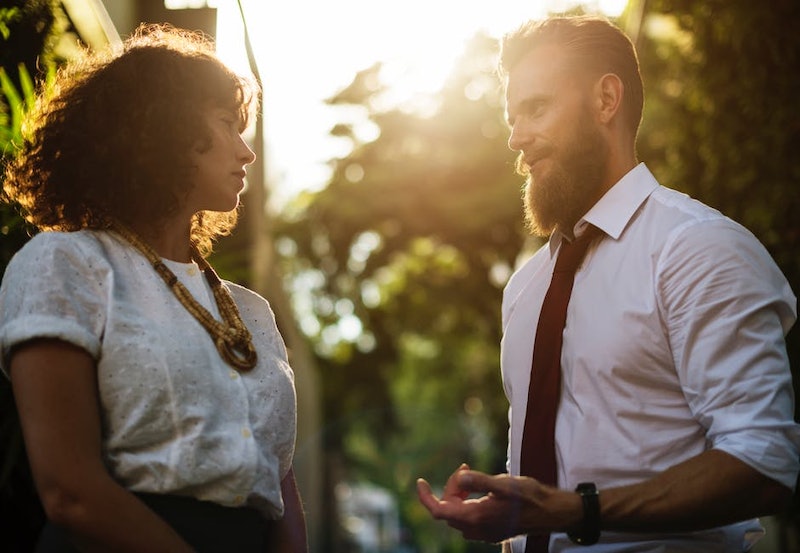 While nothing's 100 percent guaranteed — since every couple is so different — there are several things that are likely to ruin your long-term relationship. If you don't know what to watch out for, or how to prevent a problem, some problems can bring even the strongest couple down. So, the more you know about these fight-inducing, LTR-ruining problems, the better.

Luckily, there's all sorts of research going on regarding what's most likely to do a couple in. And, plenty of experts who see the same problems play out time and time again, with grave results. But, before we get to those, let's talk about what can keep a long-term relationship healthy.

"The secret to a long term relationship is flexibility," relationship expert Rhonda Milrad, LMSW tells Bustle. "A relationship is made of two individuals who come together as a unit, but do not abandon aspects of their individuality. They are separate, but together. When a relationship is healthy and dynamic, there is room for each person to grow and for the relationship to accommodate these changes."

1. Goals That Don't Match Up

While you two don't have to share the same goals, it is important to be heading in the same basic direction. Because, if you aren't, problems will arise and fights will ensue. "When two people have very different visions for their lives, it is hard to create a middle ground," Milrad says. And unless you're both 100 percent willing to reach a compromise, it's often a recipe for disaster.

It's possible to overcome a cheating incident, if you're both willing to put in the work. But, more often than not, it will send a long-term relationship up in flames. "It is hard for a couple to overcome betrayal and recreate trust, because infidelity tears at the core of a relationship," Milrad says. "Many couples don’t have the strength and patience needed to wade through the healing process (which includes phases of hurt, anger, suspicion, reassurance, etc.) in order to rebuild the relationship. "

Your sex life can be worked on and improved, and you can both put in effort to keep that spark alive. But sometimes, there's just a lack of sexual compatibility — usually due to differing sex drives — and there's nothin' you can do about it. "It’s difficult for partners with wildly differing sex drives to stay together long-term," says certified counselor Jonathan Bennett. "One or both partners can easily become frustrated and unfulfilled if they can’t get on the same page about sexual frequency and type of sexual expression."

Low self-esteem itself won't ruin your relationship. But its side effects might. "Self-esteem and control issues tend to go hand in hand, and when you’ve got this combo, it’s hard to make a long-term relationship work," Masini says. "People with low self-esteem become insecure and jealous and they use control to try and manage these feelings. It’s very tough to be in a relationship with someone like this." Which is why things often end.

6. A Lack Of Intimacy

If you two aren't being intimate — in every sense of the word — it can truly take a toll over time. "Intimacy is both emotional and physical. It’s a closeness, connection, and comfort in knowing each other deeply," relationship counselor and dating expert Samantha Burns, M.A., LMHC, tells Bustle. "Intimacy makes you feel that you matter and that your emotional well-being is a priority to your partner." Without that, one or both of you won't want to stick around.

It's impossible to be perfect, but neither of you should get in the habit of ignoring each other — even over the little things. "According to [relationship expert] Dr. John Gottman’s research, ignoring or turning away from your partner when they bid for your attention can be damaging to the longevity of your relationship," Burns says. "If your partner asks you what you want for dinner and you straight up ignore [them], or you ask [them] to watch a funny cat video and [they say] 'Be quiet, I'm busy,' it feels like a micro-rejection that over time can wear on your relationship and make you feel alone."

Arguments are going to happen during your relationship. And that's OK. It's only the couples that don't know how to deal with them properly that go their separate ways. "According to the 40 plus years of research by John Gottman ... the number one way thing that will end your relationship is how you handle conflict," speaker, author, and relationship therapist Sarah Madras tells Bustle. Do you shut each other out? Or throw around awful names during a fight? These habits have been shown to make things so much worse.

Cheating is one of the biggest ways to break the trust in your relationship. But it's not the only way. "It's all the small moments in relationships," Madras says. "The research of Brené Brown's BRAVING Model outlines all of the aspects of trust as the glue that keeps relationships together. The components of trust are: Boundaries, Reliability, Accountability, Vault, Integrity, Non-Judgement, and Generosity." If you or your SO don't have these qualities, it can be damaging to your relationship.

Yes, you're part of a couple. But that doesn't mean you can or should do everything together. If you don't set up healthy boundaries, for example, or spend time on your own, then things are more likely fall apart. "I see couples all the time that don't know their own boundaries and are then surprised, hurt, and offended when their partner oversteps one of their boundaries," Madras says. Establishing these early on will prevent resentment, and keep you both on the same page.

Relationships are full of real life sh*t — like bills, rent, and sometimes arguments — which is why they often feel more difficult than other types of relationships. But this can all be dealt with, if you're both willing to balance out the good and the bad. "If your relationship is all work and no play, then that's a breeding ground for resentment and a lack of joy," Madras says. So make a point to reconnect. Have sex, go on a date, or talk about anything else.

Keeping an eye out for issues like these can keep you and your SO together, and make for a way healthier relationship.

More like this
The 3 Zodiac Signs Most Likely To Get Married Later In Life
By Kristine Fellizar
23 Super Sweet Things To Write In A Valentine's Day Card
By Karen Belz and Lexi Inks
5 Signs You Have A Toxic Relationship With Yourself
By Lexi Inks
The Zodiac Sign Pairs Most Likely To Have A Sibling Rivalry
By Kristine Fellizar
Get Even More From Bustle — Sign Up For The Newsletter
From hair trends to relationship advice, our daily newsletter has everything you need to sound like a person who’s on TikTok, even if you aren’t.