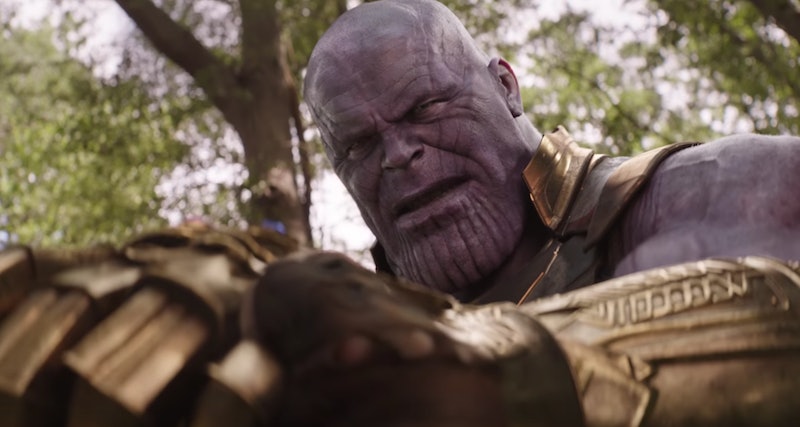 Spoilers ahead! Thanos has proven himself to be the absolute worst villain ever in the Marvel Cinematic Universe. And by worst, I mean deadliest and most evil. The Titan native and his big, purple face rained terror down on Earth's mightiest heroes in Avengers: Infinity War, but Avengers 4 theories about Thanos suggest that the big bad won't be so successful next time around. Thanos may have acquired all six Infinity Stones, snapped his fingers, and used their power to wipe out half the universe, including a good chunk of the Avengers and their allies, but that doesn't mean he's in the clear.

The Avengers put up a big fight against Thanos in Infinity War, and in Avengers 4, they'll be doing it again in an effort to take down Thanos and restore the lives of half the souls of the universe. The question is how. At the end of Infinity War, Thanos completed his mission and escaped to fabricated reality using what appears to have been the Reality Stone. Returned to a lush green paradise, Thanos is at peace, and sets out to enjoy his post-apocalyptic life with a version of young Gamora (is it his dream of Gamora? A Reality Stone trick? Gamora's soul trapped in the Soul Stone?). For all intents and purposes, Infinity War ends with Thanos winning and completing his journey, meaning he doesn't really have any other missions to complete. What's to stop him from spending the rest of his days in this new reality he created for himself? These theories about Thanos in Avengers 4 attempt to answer that question, but the truth is that with Thanos, fans have to learn to expect the unexpected.

There is a popular rumor that Thanos isn't the main villain in Avengers 4. This makes sense, after all, he's completed his goal in Infinity War, so he's not actively going to be pursuing an evil agenda in the next film. He will, however, no doubt be reacting to whatever plan the Avengers have to defeat him, which means he'll still play a role, he just won't be the main villain in the way he was in Infinity War. ComicBook.com suggests that the new villain of Avengers 4 will actually be Nebula.

In the comics, Nebula gets ahold of the Infinity Gauntlet to defeat Thanos, but ends up corrupted by its power. While it's unclear how this would unfold in the MCU. (Thanos is MIA and Nebula was on Titan when he disappeared from Wakanda, so she'd have to find him first.) It's possible that Nebula's tortured past sends her past the point of no return, especially if the Avengers are more careful in their plans than she is. Her desperation to kill Thanos could lead her down a dangerous path.

Going off from the comics, it's also possible that Nebula succeeds in getting the Infinity Stones away from Thanos, reverses his death and destruction (as she does in the source material), and then doesn't get consumed by the seduction of ultimate power. It would be poetic and pretty great if Nebula was the one to defeat Thanos once and for all, especially if Gamora really is dead. Not only would she be getting her revenge for a lifetime of torture, she would be avenging her sister's death.

Thanos Is Actually Working For Celestials

Another theory that similarly diminishes Thanos' big bad reputation is that Thanos isn't actually working alone, but answers to the Celestials. As noted by Quick Byte, Thanos isn't just interested in destroying half the universe because he wants to court Death, he's doing it in Infinity War to restore "balance" to the universe. And balance is a concept popular among the Celestials, the most powerful beings in the universe. Though Ego (Star-Lord's dad in Guardians of the Galaxy Vol. 2) was believed to be the last Celestial alive, it's possible that there are others who want to bring balance to the universe but don't want to reveal themselves, hence Thanos.

At the end of Infinity War, Thanos' Infinity Gauntlet is black, mangled and destroyed. As noted by Express, Thanos needed the Gauntlet to wield the power of all six stones, but by using that power, he might have destroyed his only way of using the stones again. Even Thanos is not powerful enough to use all six without the Gauntlet, and with it now somewhat destroyed, it's possible he won't be able to use them to defeat the Avengers in Avengers 4.

This could mean the return of Eitri the dwarf, who made his MCU debut in Infinity War. He had a Gauntlet to spare in his workshop, suggesting that Thanos anticipated the need for backups. Perhaps one of the Avengers will use the spare Gauntlet for themselves, or maybe they'll recruit a new, human sized Gauntlet to use in Avengers 4. For years, the Infinity Gauntlet has been teased in the MCU and used, almost, as a signature of sorts for Thanos. It seems unlikely that the Gauntlet won't play at least a small role in Avengers 4. And it would be great to see an object of such evil be used against Thanos in the coming film.

Just how Thanos will fit into Avengers 4 remains a mystery, but one thing is clear: he won't be the traditional supervillain we've come to expect from the superhero genre. At the end of Infinity War, Thanos has no more fight left, he's done. He has no cause to fight for, he's already achieved his goal. In Avengers 4, Thanos won't be going after the Avengers, they will be coming after him.