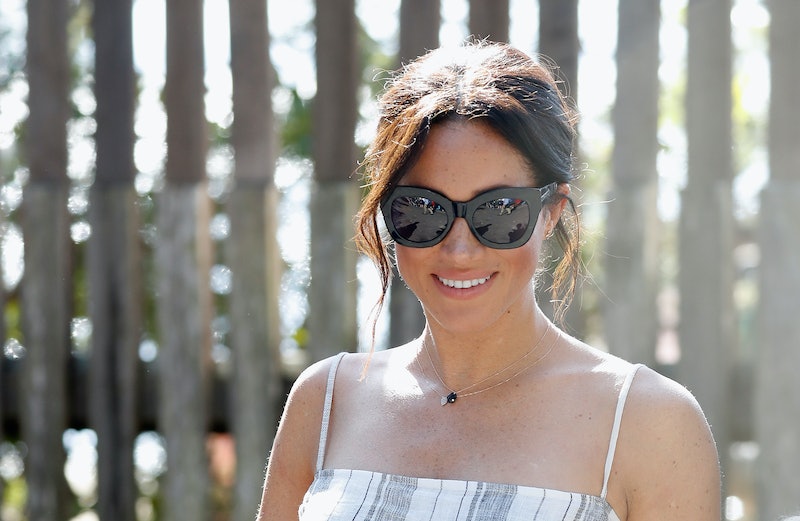 If you want to be a fairytale princess for Halloween, why not just show up to the big spooky festivities as Meghan Markle? Put to really pull off a Markle-inspired look, you'll need to know how to do your hair like Meghan Markle for Halloween. There are few royals who have such a signature style like the Duchess of Sussex does — and Markle doesn't have just one signature hair look, but two!

The Duchess is probably most well-known for her now iconic messy bun. With face framing pieces at the front and the rest of her naturally textured hair pulled back from her face in a loose bun at the nape of the neck, she's made the messy bun acceptable for basically any occasion. Hello, she did wear it to her very own royal wedding, after all.

While Markle does wear her messy bun, quite often, her other look is almost as well-known. The duchess often wears her hair in soft waves that basically make her look like she just came from her local Dry Bar. It's the same look she wore when she and Prince Harry announced their engagement.

How do you get those iconic Markle styles? Thankfully, due to their popularity, the internet is rife with how-tos and advice, and it's all at your finger tips.

Markle's hairstylist is George Northwood who, according to British Glamour, is known for his "done un-done" styles, and a term has never fit Markle's hair more. In fact, he's been traveling with Markle to craft those messy buns and classic waves. Unfortunately, Northwood has never revealed exactly how he creates Markle's waves, but it hasn't stopped other celebrity stylists from given the low down.

There are a few key elements that make Markle's hair what it is, though, and that's texture and volume. From her perfect blowout to the messy bun, you probably won't find Markle with a Kim K Cher-inspired style any time soon.

If you want to get the looks for your Meghan Markle Halloween costume, check out these tutorials.

InStyle enlisted celebrity hair stylist Frank Rizzieri to show how to get those blown-out waves. This tutorial focus all on the voluminous, swingy look Markle rocks.

If you're looking for more of a curl to your hair, E! Style's tutorial is going to be perfect for you. Hair stylist Lydia Sellers shows how to get that lived in curl look.

If you're not confident in your blow-out skills, don't worry. Markle's signature bun is another option for your Halloween costume. David Lopez helps InStyle tackle the style and reveals it's all about texture, and it's much easier than you may think.

If you want a more in-depth look at the messy bun style, this tutorial from The Everygirl is for you. It's a bit more work, but the look is perfectly polished yet messy.

If you're planning to be Meghan Markle for Halloween, don't worry about your hair. With these tutorials, you'll get her signature blowout or messy bun with ease.