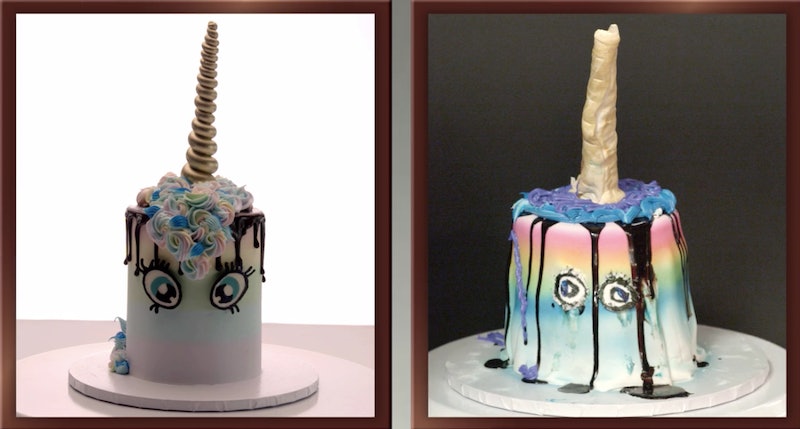 The world's most hilariously terrible bakers are back, and they're coming for your unicorn food trend. Season 2 of Nailed It has unicorn cake fails, and they're beyond amazingly awful. The Netflix baking show, which features admittedly bad bakers trying to replicate fancy cake art is always pretty entertaining, but you'll cry laughing at one episode in particular.

A total of six new episodes of Nailed It hit Netflix on Friday, and you may want to skip right to Season 2, Episode 2 — titled, "Fictitious and Delicious." The whole episode is dedicated to whimsical cakes, with the first challenge being to replicate nursery rhyme-themed cake pops (Humpty Dumpty, Jack and the Beanstalk, and Little Red Riding Hood). Then, the second challenge was to bake a dreamy unicorn cake.

Unicorn everything has been in for a while now. The world has already seen unicorn frappes, unicorn pizza, and unicorn pudding — and that's just the tip of the pastel blue and pink-colored iceberg.

But, boy, do these bakers not want the unicorn trend to live on. I mean, they didn't do it on purpose, but let's just say I can't look at carrots or bundt cake pans or unicorn faces ever again after this. (You'll see.) But, enough talking — you want to see the cakes, don't you?

First of all, here's what they were supposed to make. A tiered unicorn frosted cake complete with gold horn and rainbow layers.

And... here's what the three contestants served up.

Kristina, who called herself a "walking nightmare in the kitchen," pulled her cake out of the oven before it was baked all the way through. So, she was left with basically cake soup.

Naturally, her solution was to shove all the semi-edible pieces into a bundt pan. Why a bundt? It's a question I'll be asking for years. Kristina also had this really odd habit of ignoring the materials the model used and substituting them for candy.

Why did she do a rainbow candy horn instead of a gold fondant one? The world will never know. I wish she'd at least pulled a My Big Fat Greek Wedding and stuck the horn in the bundt hole.

Instead she left it as some kind of horrifying gaping mouth.

Honestly, they just shouldn't give the contestants candy, because they go wild with it. Nicole decided that her unicorn had "just hatched" and that's why it was sucking on a candy pacifier.

I don't think unicorns come from eggs, but, whatever. Nicole, much like Kristina, shoved her uncooked cake into a pan and decorated the top of it. Her horn tried much harder, but her unicorn face and hair is clown-level terrifying.

If I had shown you this first you wouldn't have guessed it would be the best cake, but Chris basically won just by having his cake standing up. Sure, its eyes are a little dead and it looks like it got stabbed by the horn and is bleeding chocolate, but I'll take what I can get. Chris did make one unforgivable error though. To make his unicorn horn... he wrapped a carrot in fondant. Ew.

Still, it was a marked improvement from his first round cake pop where he accidentally used salt instead of sugar and gave the world nightmares with his Humpty Dumpty figure.

Like I said, crying laughing. The whole journey is what makes it the funniest, though. Pictures alone don't do these bakers justice, so check out Episode 2 if you need a good laugh.

And R.I.P. the unicorn food trend. You were tasty while you lasted.