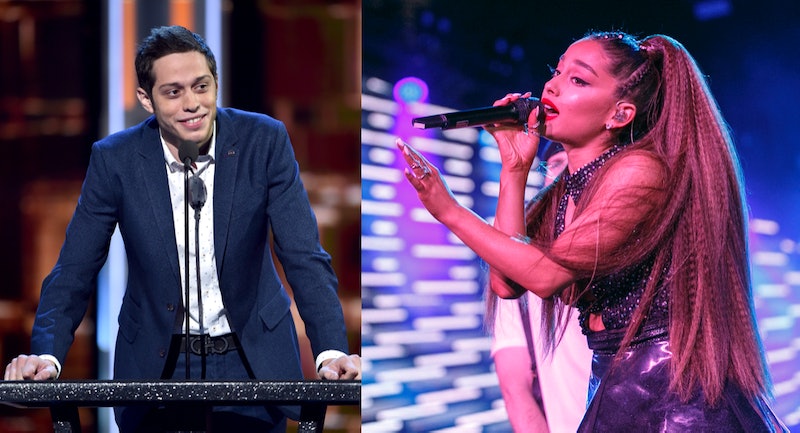 It's been an exciting summer for Ariana Grande. The singer kicked off the season with her whirlwind engagement to Saturday Night Live star Pete Davidson, and now she's ending it with the release of her long-awaited fourth album, Sweetener. And the two are very much intertwined, as evidenced by these Pete Davidson references on Ariana Grande's Sweetener.

Grande has been very open with fans about her new relationship, and she even memorialized her love for the comedian on the track "Pete Davidson." "The truth is, [I've] been the f*ck thru it and life’s too short to be cryptic n sh*t about something as beautiful as this love I’m in," Grande told fans via Twitter back in June after the track name was revealed. She later explained in an Instagram comment to a fan why she chose to name a song after her fiancé. "I'm an honest and emotional artist and human being and if my openness in my work isn't for you, that's OK, I won't be offended," she wrote.

"Pete Davidson" is by far the most explicit reference to Grande's husband-to-be on Sweetener, but could there be more that fans just don't know about? It's worth taking a deep dive into the lyrics to find out:

Before the album dropped, both Grande and Davidson cited the fourth track on Sweetener as one of their favorite new songs, and based on the fan reaction it received, they're not alone. The track, which Grande revealed was inspired by the hook from a Beyoncé demo talks about falling in love with someone who is a "dream" come true.

"'I love you' / Who starts a conversation like that? Nobody, but I do / But you are not a picture, I can't cut you up and hide you/I'll get you out my mind, mhm, I tried to ... Think I heard some wedding bells, shh, keep it to yourself / Is this real? (Is this real?)"

The second verse of the song lines up with some of the things that Grande has said about her relationship with her now-fiancé, including her recent revelation that she had a crush on him when she first met him while hosting SNL in 2016. As she said on The Tonight Show, she even predicted that she would marry the comedian one day. (Davidson also recently told GQ that he proposed the day after he met Grande.)

While "God is a Woman" is not explicitly about her relationship with Davidson, Grande has explained on Twitter that the song was inspired by the concept of "sexual female empowerment & how women are literally everything & the universe is inside of us," and based on his reaction to her filming the music video, Davidson certainly seems to believe that his fiancée is literally everything.

"I don't wanna waste no time, yeah / You ain't got a one-track mind, yeah / Have it any way you like, yeah"

Despite being a song about the power of women, there are a few lines that some fans believe may be a reference to Grande's relationship with Davidson; most notably, the beginning of the first verse, in which the singer professes that she "don't wanna waste no time," which could be a reference to the whirlwind nature of her engagement to Davidson. Later in the song, she notes that the subject is "different from the rest," which could be a implication that things are different with Davidson than they were for Grande in her past relationships.

Grande's collaboration with hip hop legend Missy Elliot also has a few lines that could be a shout out to the singer's fiancé — most notably, the chorus, which includes the line "You know I'm the wifey type, babe." In the first verse, Grande also notes that she "ain't out here looking for other dudes," which, in the wake of her and Davidson's confessions that they practically fell in love at first sight, seems to have a lot more meaning. After all, the singer did say that she wanted to marry him right away.

The track most obviously about Davidson is, of course, the interlude that Grande named after him. Remember that Instagram caption about how she "thought [Davidson] into my life?" posted back in May? That also just so happens to be the very first line of Davidson's song, which is all about how happy the singer's new love has made her.

"Pete Davidson" also includes lines calling the comedian Grande's "soulmate," but probably the sweetest reference to Davidson is when Grande declares just how happy he makes her:

The singer earned a lot of criticism in particular for naming a track on her album after Davidson, but after all that Grande has been through this past year, fans can agree that she deserves to be happy. And if she's happy with her new love, then they should be too.

More like this
Julia Fox Says She Dated Kanye To “Distract Him” So He’d Leave Kim K Alone
By Jake Viswanath
J. Lo Just Announced A New Album — And Ben Affleck Inspired At Least 1 Song
By Stephanie Topacio Long
Mariah Carey Is "So Proud" After Her Kids Joined Her In The Thanksgiving Day Parade
By Stephanie Topacio Long
Kim K Is Putting Kanye’s Memorabilia — Like Grammys & Clothes — In A Vault
By Jake Viswanath
Get Even More From Bustle — Sign Up For The Newsletter