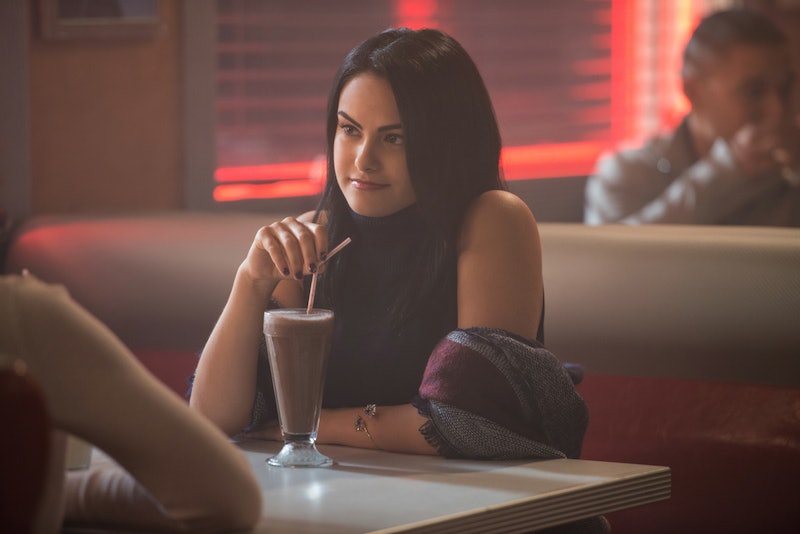 In recent Netflix crossover dreams, three stars of hit (and soon-to-be hit) teen shows proposed an all-new series to the streaming service. Two Riverdale and Chilling Adventures of Sabrina stars pitched a crossover with 13 Reasons Why, and the photo is amazing. Like, amazing. Clear up your skin, balance your checkbook, pay your bills early levels of amazing. Yes, it's that powerful. (To be fair, Sabrina is a witch.) On August 11, actors Kiernan Shipka, Camila Mendes, and Tommy Dorfman posed for a photo together that they all posted to social media. It would have ignited a passionate response from fans regardless, but the shared caption "13 Chilling Adventures of Riverdale" is basically too much to handle.

Riverdale and Chilling Adventures of Sabrina already exist in the same universe, even though one airs on The CW and one will debut exclusively to Netflix in October 2018. 13 Reasons Why, on the other hand, exists outside of the Archie Comics faves. Or does it?

Once again, if you are not prepared to see a photo that suggests a crossover between 13 Reasons Why, The Chilling Adventures of Sabrina, and Riverdale, then do not scroll any further. It is real, and even Riverdale co-star Cole Sprouse and the official Instagram account for Netflix had to weigh in on the excitement.

As Teen Vogue points out, the internet freaked out over this almost instantly. Shipka posted the photo to her Instagram account, while Mendes chose to add it to her stories. Dorfman, meanwhile, tweeted out the photo with the caption: "Whose thumb is that tho!" But honestly, when you look at it, it's probably just Mendes'. (Probably.) It's a lot; they're basically going with a full-court press to have Netflix pick up 13 Chilling Adventures of Riverdale. And if whomever runs the Instagram account for Netflix has any sway over the original programming, it might happen sooner rather than later. Maybe they can do a crossover trailer as a joke? Just to tease people? After all, viewers are still months away from Chilling Adventures of Sabrina hitting Netflix. There's so much promo opportunity here that the ads basically write themselves. And occasionally troubling content of the 13 Reasons Why series aside, what's spookier than the number 13? That seems like the safest way to incorporate the book-turned-Netflix-hit into the Archie comics-verse. Plus, hey — you know the music for it would be good.

Need another reason to love this Instagram masterpiece? The photo may have started an unintentional feud between Shipka and Netflix, which is hilarious. The account wrote in all caps that they "could not deal with" the photo of the trio, but specifically tagged Dorfman in the comment to underscore how much he, in particular, was beloved. To be fair, Mendes' show airs on The CW, and Shipka's is yet to premiere. Still, Netflix playing favorites — and leaving a witch out of it? That's just asking for trouble.

As for the one reason why this photo happened (sorry, sorry)? That's less clear. It's unlikely that they were actually working on a Netflix spinoff together, real or fake. But fans are always here for this friendly, in the words of Sprouse, #content, so fire up those cauldrons and brew a strong manifesting potion. Because this crossover needs to happen.