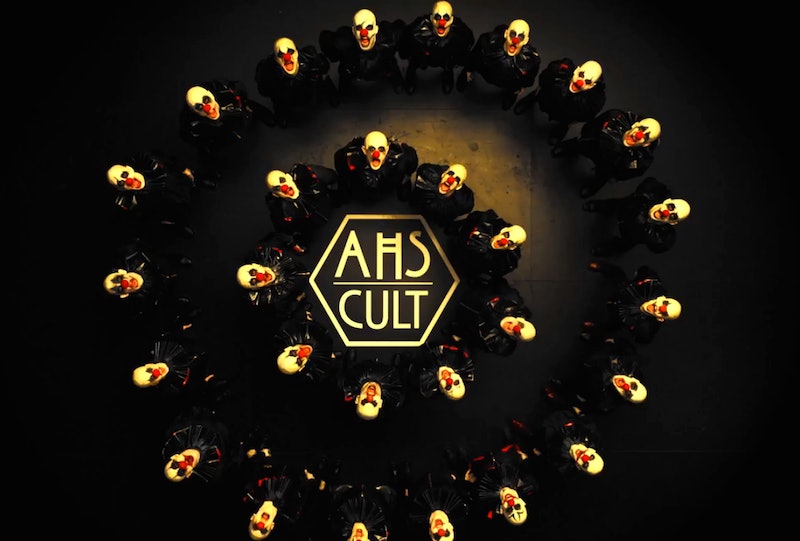 Murphy has been dropping hints on his social media for a couple months about American Horror Story Season 7, so the presentation at Comic-Con on the night of July 20 finally gave people (some) answers. Not only will the season be named Cult, but FX announced that it will premiere on Tuesday, Sept. 5. None of the confirmed cast — including Sarah Paulson, Evan Peters, Billie Lourd, Billy Eichner, or Lena Dunham — were in the preview, but another group of people were. And let's just say that if you were hoping that the creepy clowns that have been gracing Murphy's Instagram, like Twisty from Season 4's Freak Show, weren't going to be so prominently featured, the Cult announcement proved that you're out of luck. That's because it seems from the Comic-Con preview that the clowns are the ones trying to lure people into their cult.

But it's not just the people in attendance at Comic-Con that get to be scared by the Cult clowns. FX has launched a new site for American Horror Story Season 7 that features another video of them. In this one, the bees that Murphy shared on his Instagram make an appearance and it's definitely referencing a hive-mind mentality. A woman in regular clothing can also be seen being stuck in the swarming crowd of clowns.

If you were frustrated with the lack of information surrounding Season 6's Roanoke, then you'll also be interested to know that this AHS website will provide new intel each week leading up to the Sept. 5 premiere. The current video is labeled as "Week One" and the seven other weeks are locked at this point. Users are prompted to "join" the clowns by signing in using Facebook for exclusive AHS-related content in the upcoming weeks. It all feels rather cultish, does it not?

Most every politician uses manipulation to win over crowds in order to receive votes. But with Donald Trump continually lying throughout his presidential campaign and presidency, along with him condemning the media for being dishonest, the AHS theme being Cult proves that Murphy is completely dedicated to showing the sinister side of the election. And the fact that groupthink is winning over truth in the current political landscape — well, that's truly an American Horror Story.