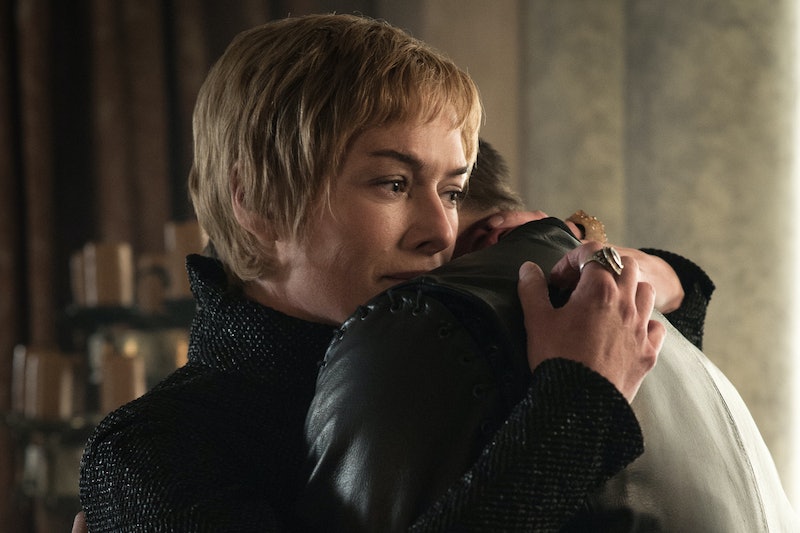 Squabbling siblings, secret marriages, and surprise babies… oh my! Game Of Thrones felt more like a telenovela than ever in Season 7's fifth episode, "Eastwatch," as tensions grew between Arya and Sansa, Gilly discovered that Rhaegar Targaryen and Lyanna Stark were married, and Cersei revealed that she is pregnant with Jaime's child. Or is she? While some fans debate whether or not the Lannister queen is lying about having a bun in the oven, others theorize about what Cersei's baby means for her prophecy.

In the opening scene of Season 5, viewers were treated to a flashback of a formative event in Cersei's childhood, which would go on to influence virtually every choice she made for the rest of her life. After tasting young Cersei's blood, a woods witch informed her that she would marry the king, that she would have three children who all died before her, and that eventually a younger and more beautiful queen would come to replace her. Of course, as fans will well know, Cersei did end up marrying King Robert; Joffrey, Myrcella, and Tommen have all passed away; and Daenerys is gunning for Cersei's crown. But Maggy the Frog never mentioned anything about a fourth child, so where does this new pregnancy fit into the scheme of things?

From Cersei's perspective, she probably believes that this unborn child signals the official end of the prophecy's hold over her life. With her husband dead, her children gone, and the young queen vanquished (remember, Cersei always operated under the assumption that her would-be usurper was Margaery Tyrell), she thinks all the facets of the prophecy have been fulfilled. But savvy fantasy fans will know that that's not really the way prophecies work, is it? More likely, this baby fits into Maggy's prediction in some unexpected but crucial way.

Remember, this isn't actually Cersei's fourth child; it's her fifth. According to what Cersei told Catelyn way back in Season 1, she and Robert actually conceived a child together before Joffrey, a "black-haired beauty" who died of a fever in his infancy. While this first child was an invention by showrunners David Benioff & D.B. Weiss and not based on anything from the books, it can be explained away by assuming that Maggy was referring only to children who would live past infancy, or that she was referring only to children that Cersei would conceive with Jaime. Either way, this history doesn't bode well for the unborn baby.

So it's possible that Cersei's pregnancy won't come to term (or that the child wouldn't live long if it did), and its presence does complicate another, crucial part of the prophecy. The most popular piece of Maggy's puzzle among book readers — so popular that it's still discussed at length in the context of the show, even though the show's version of Maggy never even said it — is the part concerning the valonqar, who the witch promises will kill Cersei someday.

Valonqar is High Valyrian for "little brother," and fans love arguing about which little brother will get the honor of offing Cersei. Cersei herself has always assumed it will be Tyrion — which, along with the fact that their mother died giving birth to him, is why she's always hated him. Most book readers agree that it will probably be her twin Jaime, who was technically born several minutes after Cersei, while a growing contingent of show watchers think that it will be Arya who kills the queen while wearing Jaime's face. But this latest development introduces an intriguing new possibility: that the valonqar in question isn't Cersei's little brother at all, but rather her children's little brother… the unborn baby growing in her womb at this very moment.

Here's exactly what Maggy told Cersei about her inevitable doom: After her three children had perished, "the valonqar shall wrap his hands about your pale white throat and choke the life from you." In this case, the part about the hands and the throat would have to be metaphorical… but the part about the valonqar choking the life from Cersei sounds eerily appropriate when applied to the idea of dying during childbirth.

This already sounds like exactly the kind of plot twist fans have come to expect from Game Of Thrones; but Reddit user arxe has gone a step further and upped the tragedy quotient, bringing a certain element of poetic justice to Cersei's demise. According to their take on the increasingly popular theory, the baby that will be born to Cersei will be a dwarf like Tyrion — and she will live just long enough to see her offspring and recognize the "cosmic justice" she has been served for all the years of abuse she put Tyrion through, blaming him for the death of their own mother.

Readers have been so sure of themselves in their interpretation of the valonqar prophecy for so many years; it would be thrilling to see the show introduce a shocking wrinkle in such a well-worn fan theory at this late stage in the game. Having Cersei die in exactly the same way as her beloved mother, by the product of her incestuous relationship with Jaime, would be the perfect way to achieve that shock.

More like this
The Bestselling Novel 'The Doll Factory' Will Be Adapted Into Thrilling TV Series
By Catharina Cheung
Does 'Locke & Key’s Ending Mean There Could Be A Season 4?
By Sophia Moore
Netflix Just Rebooted A Classic ‘90s High School Drama
By Maxine Harrison
'The Simpsons' Will *Finally* Address How They “Predict The Future”
By Sam Ramsden
Get Even More From Bustle — Sign Up For The Newsletter