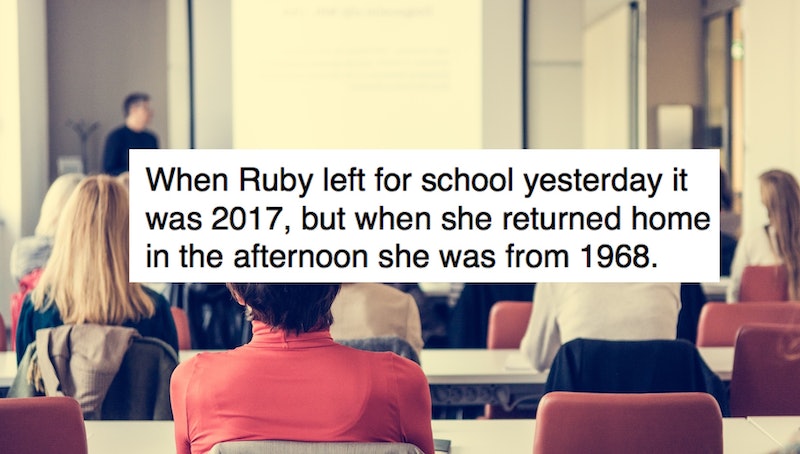 If you’re looking for a particularly salty new way to call out sexism, take a note from this dad’s book and do it with a heavy dose of sarcasm. In a tweet that has since gone viral, Stephen Callaghan shared a letter he wrote calling out sexism at his daughter’s school. (Bustle reached out to Callaghan, but he did not immediately respond to request for comment.)

Callaghan, who lives in New South Wales, Australia, penned the letter after learning what the school had planned for his 12-year-old daughter Ruby and her Year 6 classmates prior to their graduation. The girls would be participating in a “makeover day,” getting their hair and makeup done in the school library. The boys would be taking a trip to Bunnings, a chain hardware store. It’s all so on-the-nose that it’d almost be funny if it weren’t, you know, kind of awful.

Rather than respond with pure rage (as I probably would have done) or ignore the issue altogether (which happens all too often), Callaghan took a different, snarkier path to teach the school a lesson in gender roles, making it all the better.

“When Ruby left for school yesterday it was 2017,” Callaghan wrote, “but when she returned home in the afternoon she was from 1968.”

Callaghan goes on to ask the school about their presumed “faulty Flux Capacitor” and whether they were able to identify “a rip in the time-space continuum” located in the building. “I look forward to this being rectified,” Callaghan concluded, “and my daughter and other girls at the school being returned to this millennium where school activities are not divided sharply along gender lines.”

A simple Google search will tell you that this is unfortunately far from the first sexist policy a school in the current decade has enacted. It’s not even the only one that gained attention this year. A few months ago, a high school in Wisconsin was apparently requesting “dress-wearing students” to send pictures of their dresses before dances to be approved by the administration. The school’s superintendent told the Journal Sentinel the intention of the policy wasn’t to be “sexist” but out of “sensitivity to [their] students.” Many parents and students disagreed, stating that it ultimately was holding female students responsible for the potential actions of other students.

Dress code policies in and of themselves are often steeped in sexism. As the parents and students of the Wisconsin school implied, they disproportionately affect female students and are usually reinforce rape culture in practice. While there is a need to have conversations about appropriate dress for school (as you would in a workplace), there are ways to do so that are inclusive and don’t marginalize specific groups of students.

Sexism in schools has also seeped into some classrooms, especially when it comes to how we talk to teens about sexual education. Healthy conversations about what is and what is not consent, in particular, are lacking in most sex ed classes.

While makeovers and hardware store trips may seems trivial in comparison to some of these bigger, more severe issues, they do play a significant part in reinforcing gender stereotypes in our culture. “I said I'd go in to bat for her if she wanted to challenge their decision,” Callaghan told Australia’s Daily Liberal. “She thought about it but then decided she'd like a haircut. But she was and is still annoyed she didn't get a choice.”

According to the Daily Liberal, a spokesperson from the Department of Education emailed Callaghan saying they are “happy to accommodate any student who prefers the alternative activity” and that they hadn’t received any direct complaints or concerns from parents or students.

The online response to Callaghan’s tweet has been overwhelmingly positive, as he writes in a second post. “At 12 years of age my daughter is starting to notice there are plenty of people prepared to tell her what she can & can't do based solely on the fact she is female,” Callaghan tweeted. “She would like this to change. So would I.”

So would all of us, Ruby.