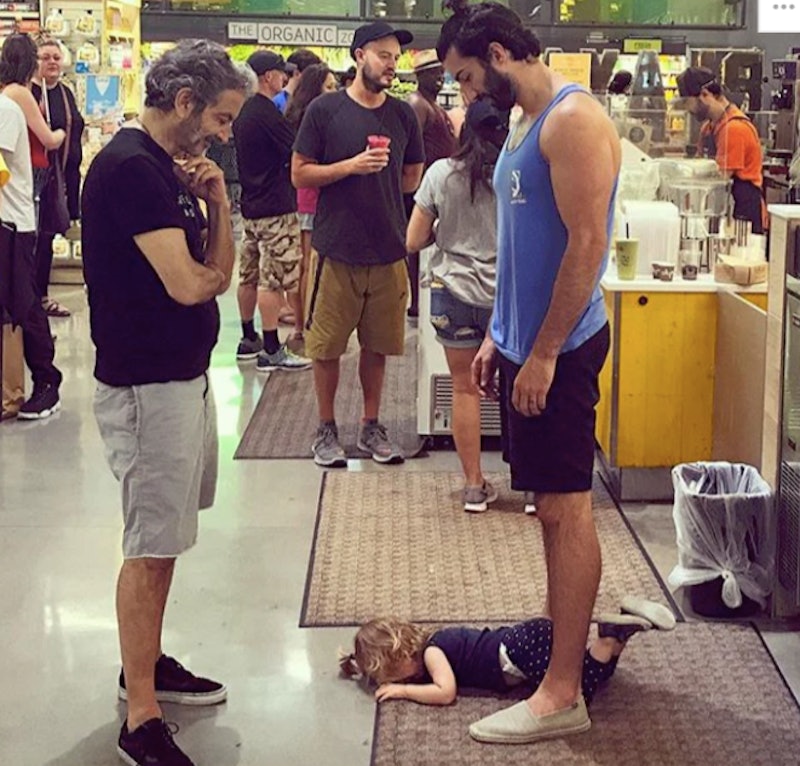 Temper tantrums? They happen. Anyone who has ever spent time around small children can attest to that fact — and sometimes, there’s nothing you can do about it. And that’s fine. In fact, that’s what a recent Instagram post from a dad whose child had a temper tantrum at Whole Foods nail squarely on the head. Of course, I say “a dad”(which, to be fair, is true); it’s probably worth noting, however, that the dad in question is Justin Baldoni, who is probably best known to the general public as Rafael on Jane the Virgin. But I don’t mean it’s notable in a “Celebrities: They’re just like us!” kind of way; I mean it’s notable in that his visibility makes him well-placed to spread some important messages — and that’s exactly what he’s doing with this particular post.

Last week, Baldoni posted a photo to his Instagram page depicting him and his own father standing over his toddler daughter as she has a complete and total meltdown in the middle of Whole Foods. She’s face down on the floor, presumably screaming her head off; meanwhile, her dad and grandfather are just looking down at her, both smiling in a bemused, “Ah, kids…” sort of way. They’re not scolding her; they’re not yelling at her; and perhaps most importantly, they’re not acting at all embarrassed — something which Baldoni says he learned from his dad. “I can only imagine how many times I did this when I was her age,” the actor wrote. “My dad taught me so much about what it means to be a man, but this post is about one thing and one thing only. Being comfortable in the uncomfortable. Something I grew him do with me over and over again.”

“My dad always let me feel what I needed to feel, even if it was in public and embarrassing,” Baldoni wrote. “I don’t remember him ever saying ‘You’re embarrassing me!’ or ‘Don’t cry!’ It wasn’t until recently that I realized how paramount that was for my own emotional development.” So that’s what he let his own daughter do: He let her feel what she was feeling without shaming her for it, or shaming himself for it.

This point about being allowed to feel what we feel is an important one. Our culture doesn’t like feelings; they can be messy and hard to predict, so they’re frequently treated as negative or something to be avoided. As a result, we’re taught from an early age not to display them — often because of the way our culture genders them: For women, emotions are frequently used against us as a way to infantilize us, making them an excuse to treat us with a lack of respect or to ignore us; for men, showing emotion is treated as a sign that someone is too “feminine” and therefore “weak”; and for gender nonconforming or nonbinary people, there’s an awful lot of erasure going on.

But the problem with learning that something shouldn’t be seen is that it has a habit of also teaching us that it shouldn’t exist at all. By teaching us that our emotions should be hidden, our culture attaches a stigma to them: They’re shameful, they’re embarrassing, they’re inconvenient for other people, and it’s just easier for everyone else if we don’t ever have them. It’s an enormously harmful way of thinking.

But what if, instead of treating emotions as weaknesses, we learned to treat them as strengths? Or what if we didn’t even try to peg positive or negative connotations to them, but just let them, y’know, exist? Yes, we do need to learn how to deal with them productively — but I can’t help but think that by never allowing kids to feel what they feel, we’re teaching them to place other people’s comfort over their own in ways that can really do some damage later on. That’s how we end up with adults who think that if someone wants to touch them even though they don’t want to be touched, then they have to go ahead and let that person touch them. It’s how we end up with adults who think that if someone keeps pushing them to say yes to something they don’t want to say yes to, they have to say yes to it anyway. None of that is OK… but it’s what our culture teaches us from an early age, and unless we make an effort to break the cycle, we’ll just keep perpetuating it.

Also? Let’s not forget that we’re talking about kids here. Kids are not equipped to deal with emotions the same way adults are. As Baldoni noted, “Our children are learning and processing so much information and they don't know what to do with all of these new feelings that come up” — and we need to give them the space and freedom figure all that out. Most scientists agree that the human brain isn’t fully mature until we’re around 25 years old (that’s why you can’t rent a car until you turn 25) — and, according to one study commissioned by Nickelodeon UK in 2013, the average adult doesn’t reach full emotional maturity until much later than you probably think: Age 32 for women and age 43 for men. If we’re not fully emotionally mature until we’ve reached our third our fourth decade, how on earth can we expect two- or three-year-olds to display a firm grasp on how to deal with all the complicated things they feel — and are often feeling for the very first time?

That’s what Baldoni’s post is getting at. “I try to remember to make sure my daughter knows it’s OK that she feels deeply,” he wrote. “It’s not embarrassing to me when she throws tantrums in the grocery store, or screams on a plane. I’m her dad… not yours. Let’s not be embarrassed for our children. It doesn’t reflect on you.”

And, as he points out, us adults could all probably stand to be a little kinder to ourselves, too. “If we got out everything we were feeling and allowed ourselves to throw tantrums and cry when we felt the need to, then maybe we could also let ourselves feel more joy and happiness,” he wrote. “And that is something this world could definitely use a little more of.”

Heck. And yes. The bottom line is that emotions happen. We’re all responsible for managing ours on our own — we can’t make other people manage them for us — but they happen. And that’s OK. In fact, that’s what makes us human.