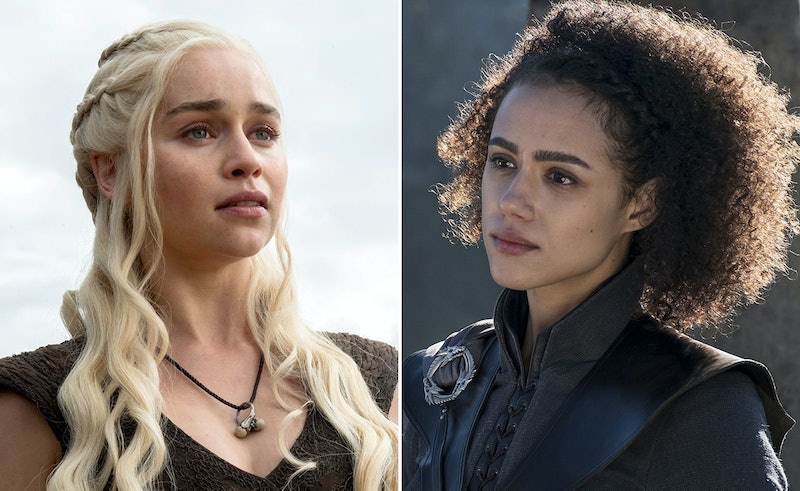 That Khaleesi woman is for sure one of the most talked about characters in Game Of Thrones and it's easy to understand why. A feminist icon in her own right, she got rid of her d-bag brother to become head of her family, became a voice to the voiceless, boss lady to some scary AF dragons, and lived out a lot of people's fantasies by hooking up with a certain Jon Snow (let's ignore the fact that he is undead/her brother). So what's in store for her in Season 8? Well, judging by this Game of Thrones deleted scene, some fans are convinced the future's not as bright as one might have hoped for Daenerys Targaryen.

This particular GoT theory has been put forward by super fan and dedicated YouTuber, The GOT Guy. He is as eagle-eyed as they come and has been picking apart old episodes to find clues that could potentially reveal what happens in Season 8.

After watching this particular deleted scene, The GOT Guy has become convinced that there is a mole in close quarters with Daenerys, the Mother of Dragons. Oh and when I say mole, I do not mean a blind ground dweller. I mean a nasty little spy who is feeding information to the enemy. An enemy on the inside if you will. This enemy is suggested to be none other than Missandei.

Who is that? I hear you ask. Well, fans of previous seasons will be familiar with Missandei because she is one of Daenerys' closest confidants. Originally a slave, she worked for the masters of Astapor as an interpreter. Multilingual and super intelligent, she was freed by her when Daenerys beat the heck out of her masters using her Unsullied army who are basically like, invincible.

Missandei then went on then to become handmaiden to Daenerys and one of her most trusted friends and advisors. She also had some pretty loved up and steamy moments with the chosen commander of the Unsullied, Grey Worm (aka Daenerys' righthand man). So really, her allegiances must lie with Team Targaryen, right? Right? According to this fan theory, perhaps not.

The GOT Guy explained that there in a deleted scene, there is a very suspicious moment between the handmaiden and another member of Danaerys' squad, Ser Davos Seaworth.

When The Onion Knight, as he is also known, meets Missandei, he asks her where she is from because he can't quite place her accent. This, according to The GOT Guy, could be a major clue that something is off, because like, Ser Davos knows his accents. When she says she is from Naath and he goes on to comment on it being really lovely there, she sort of nods weirdly and walks off. Why?

The GOT Guy believes Missandei says nothing and walks off because she has never even been there and is just making it all up. Shivers, actual shivers right now.

In another scene, deleted from Season 4, Danaerys says to Missandei: "Never betray me, never." Holy moly. This could be another of those prophecies and gee whizz, we all know this show has zero issue with killing off main characters or pulling out acts of subterfuge that are too much to handle.

This particular theory may very well explain why the Lannisters seem to have been one step ahead of old pal Khaleesi as of late.

Yep, I can't wait for Season 8 either.