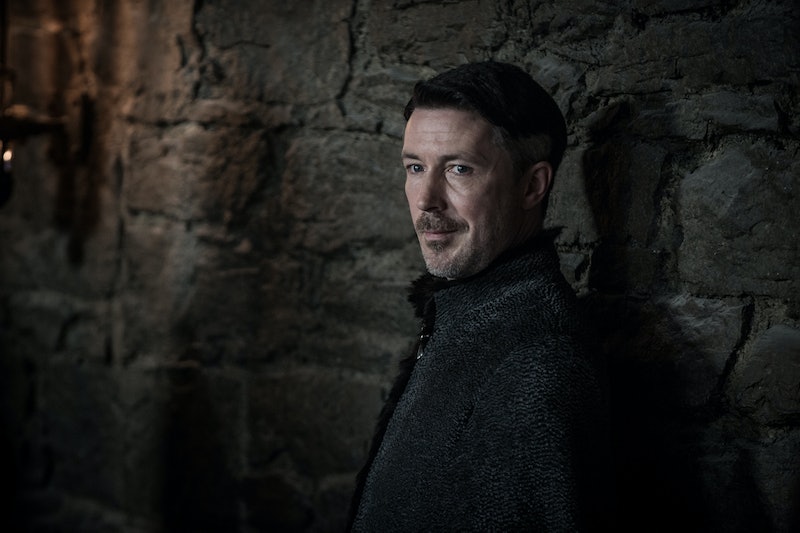 It's not unheard of for Game of Thrones to bring characters back from the dead (Jon Snow), or to reveal that they were never dead in the first place (The Hound). But could Littlefinger really be alive despite Arya and Sansa's execution of the Master of Coin at the end of Season 7? An incredibly comprehensive fan theory from Reddit user MrSilenceT suggests that not only is Petyr Baelish alive, but that he has a role to play in Season 8. And even though it seems like a stretch, elements of this theory actually make a whole lot of sense.

Midway through Season 7, Littlefinger realizes his role in the assassination attempt on Bran Stark is about to be revealed. Bran himself makes certain of that. And it's at this point that viewers see a new side to a man whose ability to play the game of thrones had been pretty impeccable up until that point: Littlefinger becomes desperate and sloppy in his machinations. In retrospect, there's nothing subtle about his attempt to turn Sansa and Arya against one another, which seems odd since he knows Bran is likely going to tell his siblings about the role that their guest played in trying to murder him.

The theory points out that in the fifth episode of Season 7, Littlefinger is seen passing what appears to be a coin to a young woman who tells him, "Your time is up." What if this character is actually a Faceless Man who takes Littlefinger's place? (Arya's time in Braavos revealed that a person doesn't necessarily have to be dead for a Faceless Man to wear their face.)

From this point on, Littlefinger is never quite himself. The fact that he begs for his life before his execution is particularly odd considering that he's previously faced death threats from Ned Stark, Cersei Lannister, and Sansa with little to no reaction at all. Littlefinger's never been afraid of dying, but he's scared enough to beg for his life when the Stark sisters pass his sentence.

Granted, this could be because he knows there's no escape this time. Even a man with as much bravado as Petyr would grovel when faced with an inescapable death. But so would a person realizing the full gravity of their decision to take Littlefinger's place and die for him while the real Littlefinger is off plotting his next move somewhere else in Westeros entirely.

If Littlefinger is still alive, it's hard to imagine how he could possibly fit into the final six episodes. Seeing him achieve his goal of manipulating his way to the top and taking the Iron Throne would be an odd ending to say the least. There's also the little matter of actor Aidan Gillen stepping into a role on History's Project Blue Book right after he exited Game of Thrones. From a practical standpoint, it doesn't seem like he would have been able to film much for Season 8, if anything at all, given his busy schedule.

Still, having Littlefinger escape death once more would be a fitting end for a character who thrives on manipulation. Could he have cheated the god of death? Probably not, but that's exactly the kind of unexpected twist that Game of Thrones wouldn't shy away from revealing.