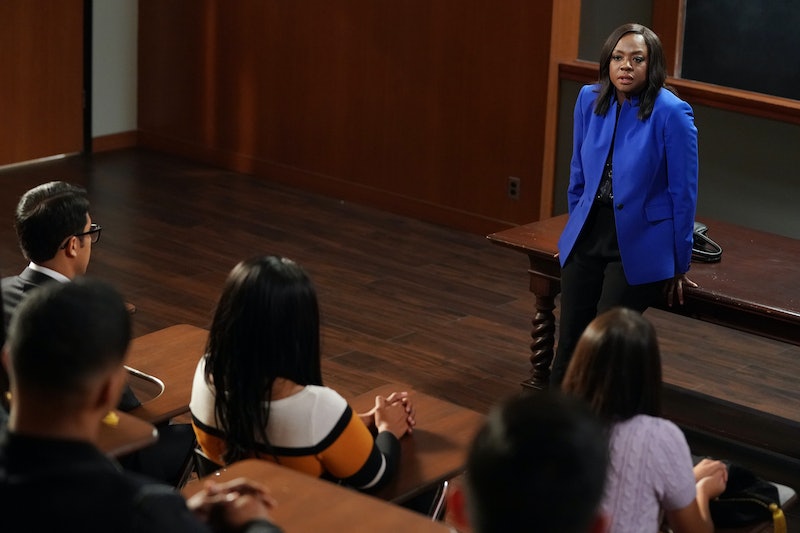 Annalise and the Keating Five's time together is coming to an end with the return of the final season of How To Get Away With Murder. Only six episodes remain and a How To Get Away With Murder Season 6 recap of what happened so far will prepare you for everything that's about to be revealed. The FBI is still after Annalise and her law students for Sam's death and who killed Annalise (if she really is dead) in the future is a big question mark. But the first part of Season 6 introduced a new murder mystery — plus oh-so-many more twists — as is only fitting for HTGAWM's big farewell.

The season started with the reveal that Emmet had in fact died by poisoning at the end of Season 5. That, combined with Laurel's disappearance, led Annalise to voluntarily check into rehab, where she told her roommate she was involved in the cover-up of Sam's death. Speaking of Sam, his ex-wife and Gabriel's mom Vivian showed up — and she gave her son a box of Sam's recordings of Annalise's therapy sessions. Vivian was working for the FBI to help catch Annalise and when that fell through, the FBI recruited Nate, who is still dealing with his father's death.

Annalise and Frank exposed that Xavier Castillo and not Ron Miller had ordered Nate Sr. to be killed. Bonnie, who was in the hospital after Xavier had her brakes cut, was shaken knowing that she had killed an innocent man and that Frank and Annalise had been conspiring without her. Frank told her he will die loving her. Nate wasn't the only one to be dealing with father issues since Michaela found out the truth about her birth father — and that Annalise had known all along. But when it comes to the big mysteries surrounding Annalise and her Keating 5, here's where the show left off ahead of its return on April 2.

After having gone missing alongside her baby son Christopher in the Season 5 finale, Laurel returned in the Season 6 fall finale. Frank has been looking for her, but she FaceTimed Michaela to tell the Keating Crew she wasn't the FBI informant and explained that Tegan had helped her escape ... though her reasons for fleeing and if Tegan actually helped her aren't clear yet.

Asher Was The Mole

Pressured by his mom and sister, Asher turned out to be the FBI informant. Michaela figured it out while on shrooms after he had proposed to her the night before graduation. He said he only wanted to help the FBI get Annalise because they had told him that she was responsible for leaking the corruption information about his father, which led to his dad's death by suicide. He also claimed that the FBI knew everything about Sam, Emily Sinclair, and Miller. After his confession, he fled the house to Bonnie's. But then, sometime later that night, he was bludgeoned to death with a fireplace poker. RIP Asher.

The Keating Five's numbers have dwindled since Wes died and Laurel went missing. But there was a major switch-up in the fall finale beyond the revelation that Laurel is alive. Shortly after Asher confessed to being the informant, he was discovered dead. Michaela and Connor are arrested for his murder, but they hadn't killed him on graduation night (despite Oliver's best efforts of whacking him in the head with a fireplace poker), so who did? A mystery person had gone to Gabriel's place, so could he know something about Asher's death?

Then, in the final moments, Wes turned up at Annalise's funeral to give a eulogy. Wes presumably died back in Season 3, but if he's really alive, is that why Laurel is in hiding with their son Christopher? And did he have something to do with Annalise's potential death?

The end of the fall finale also showed Annalise seemingly fleeing the country with her new identity Justine, but she will inevitably be back. The trailer for the return of HTGAWM Season 6 promises that the final six episodes will "answer all your questions," so, buckle up, because it's going to be one bumpy ride.