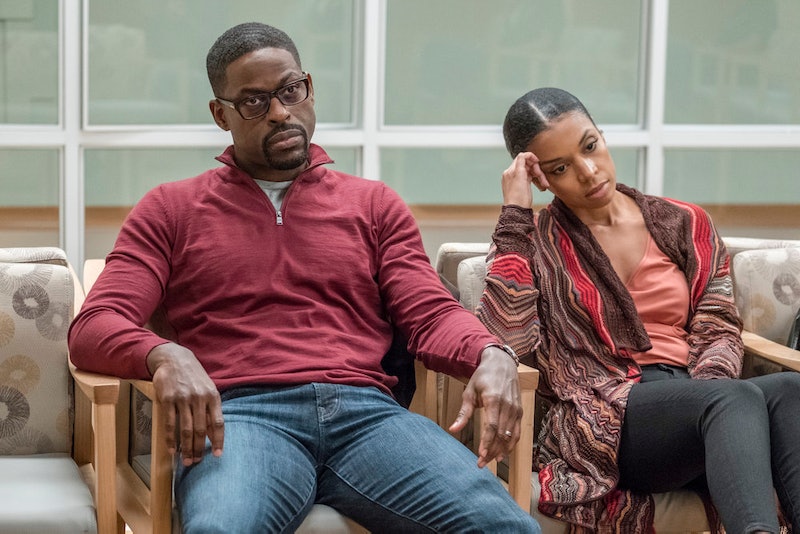 The latest episode of This Is Us, "The Graduates," hit Kate Pearson hard, but it also introduced yet another roadblock for Randall and Beth. The show's most stable couple is on seriously rocky ground thanks to Randall asking Beth to give up her dance classes. Now a new Entertainment Weekly interview with executive producer Isaac Aptaker has revealed that This Is Us Season 3 will reveal the fate of Randall and Beth's marriage over the course of the final episodes of the season.

Back in September, at the start of the season, Sterling K. Brown suggested that no matter how tense things got, the couple would always find their way back to each other. He told TV Line, "There's some time that they have to re-form and make [their] union look like it looks in [the season premiere], but that's what happens in a marriage: You grow together and apart and together and apart, and the ones that work are the ones where you keep coming back together."

However, Aptaker's more recent statement about Randall and Beth is far more concerning. "Over the next few episodes we'll see this fight and their marriage come to a real head, and then they'll either find their way back to each other or they won't," he told the publication. Which, hang on, there's seriously a possibility that this incredible couple won't make it through this crisis in their marriage?

Just the idea of seeing them split up is enough to break any fan's heart. Aptaker isn't here to reassure viewers though. All he would say for sure is that by the end of the season you'll have a good idea of where their marriage is heading. He continued, "But yes, all things Beth and Randall will be answered, over the next run of episodes."

Aptaker's words are worrying, there's no doubt, but Randall and Beth's marriage doesn't feel like it's past the point of no return yet. However, if Randall doesn't start making compromises for his family instead of always expecting Beth to, then they could be in real trouble. Since the series began, she's been the one making room in her home for Randall's biological father and Kevin, she's the one who carried the family financially while her husband chased his dreams, and she's the one who balanced losing her job and taking care of the kids when Randall was busy running for a political office in a district three hours away from his family's home. To now ask her to give up dance when she just allowed herself to rediscover her passion for it is just too big of a request, no matter the circumstances.

One thing fans know for sure is that Beth won't be setting her dreams aside this time. In the future, she's running her own dance studio, so she clearly stays on this path. What's uncertain is the status of Randall and Beth's marriage. After all, Randall did have Tess call her mom in the season premiere's flashforward. That could mean nothing — or in light of recent developments, it could have been a huge clue about the state of their union.

Breaking Beth and Randall up feels too sad, even for This Is Us, but you might want to prepare yourself for heartbreak, just in case.