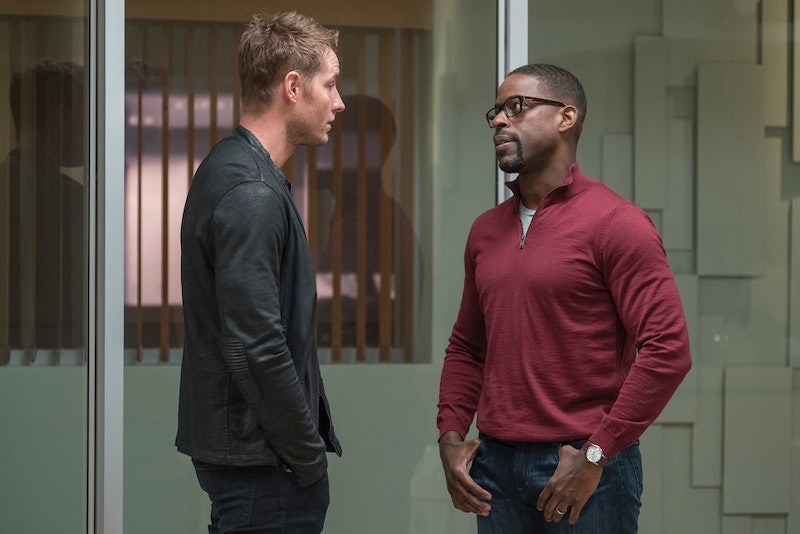 This Is Us has never been a show to play by the rules. Not only does it typically make us burst into tears on a weekly basis with its heart-wrenching storylines, but it also plays with timelines in such a unique way that it's tripped us up on more than one occasion. And even though Season 3 is slowly but surely coming to a close, the masterminds behind the show are already looking forward to what's next for these characters. In fact, a few This Is Us Season 4 spoilers were discussed during a chat co-showrunners Dan Fogelman and Isaac Aptaker recently had with The Hollywood Reporter, where the two of them hinted at "new beginnings" for the Pearson family and a prominent, game-changing shift in the timeline.

"This season wraps up a lot in a really satisfying way and then asks a whole lot of new questions so season four has a lot of new beginnings," Aptaker explained to the outlet. And while that could mean pretty much anything at this point, Fogelman's remarks about the show's timeline will definitely leave some fans scratching their heads in both fascination and perhaps even a little confusion. "There is a moment in the show where, in a weird way, the present becomes the past and the future becomes the present," Fogelman revealed to THR, adding:

"That sounds really high-level. It doesn't always have to be like, in the deep, deep future, but we can play with time in a really interesting way that really tells the full story of a family. It's always been our plan from the beginning. I think people aren't going to quite realize what we're going to try and do in the next couple of seasons of the show."

Season 2 ended with the introduction of a brand new flash-forward timeline, which jumped many years into the future and featured Randall as an old man who was visiting his adult daughter, Tess, at work. It was a twist no one was expecting, but it's add yet another mystery to where this characters will ultimately end up.

Many questions involving this timeline have yet to be answered, including details about the mysterious "Her" on the show. But given Fogelman's latest comments on the matter, it seems we could be making a more permanent jump to that timeline in the very near future. Perhaps that will even be a main focal point for Season 4.

Cryptic teasers aside, Fogelman also indicated that he has every intention of continuing to play with the show's format, even going so far as to say he'd be down for doing a live episode at some point. "I would put our cast on live television very comfortably because of how good they all are and because there's not a weak link you ever have to protect, which is usually the reason you don't do it," Fogelman said in the same THR interview.

Clearly this show is not afraid to take some risks. Let's just hope that whatever future Season 4 has in store for the Pearsons, it won't be completely full of heartbreak. This poor family has been through enough.