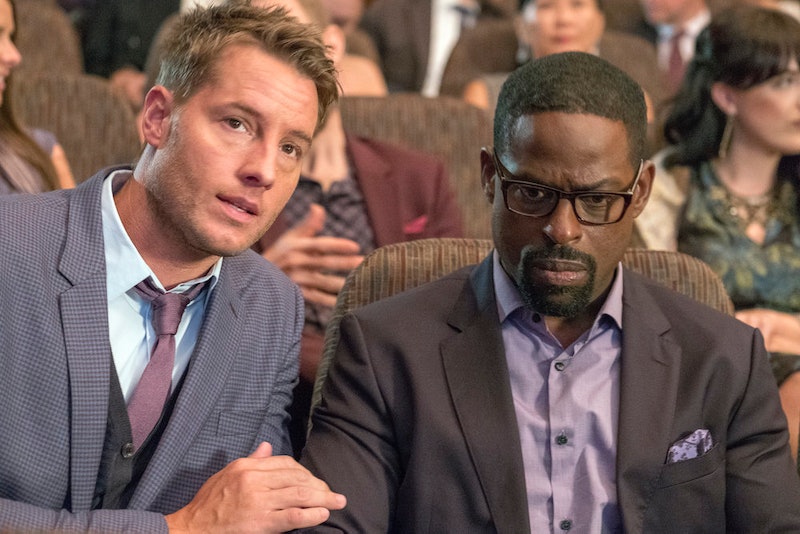 Spoilers ahead for the This Is Us midseason finale. Ever since the show first introduced a flash-forward in the Season 2 of an adult Tess and greying Randall, This Is Us fans have been tortured with all the possibilities of who the two of them might be sadly headed to see at some unclear point in the future. Until now, we only knew it was a woman, but in its midseason finale This Is Us finally revealed who "Her" is, and it's actually one of the possibilities that made the most sense in the first place.

In another flash-forward toward the end of this week's episode, the Season 3 fall finale, we see Beth. She's looking fabulous, she's apparently supervising some ballet dancers, and she tells one of her employees that she and her family are leaving soon to go "see Randall's mother." Lo and behold, the mystery woman is apparently Rebecca. Of course, Rebecca being "Her" makes way more sense than some of the sadder fan theories that have been floating around.

Some people have speculated that Kate would be the one everyone is going to see, judging by the fact that she’s yet to show up in the flash-forwards. And others have suggested that perhaps some harm had befallen one of Randall and Beth’s other daughters, Annie and Deja.

There were even more endless possibilities regarding who the mystery woman would be prior to this week’s big reveal, but honestly, the fact that it’s Rebecca makes way more sense than anything else. She’s the oldest in the family, obviously, as its matriarch, and if she’s in her final days when the flash-forwards take place, it still means she’s lived a long life.

The knowledge that Rebecca is the person in question explains why future Tess is so torn up about seeing “her” — it’s her grandmother, and the woman who, as we learned this week, encouraged her to be truthful with her parents about her identity. And as Randall has always had his mom’s back, it makes sense that he’s the one rallying the family to be at her side.

The circumstances of why everyone is rallying around Rebecca could break some hearts, depending on what they turn out to be. Some people have speculated that in the future, the family is fractured, and Rebecca’s illness or downhill spiral could cause people to come back together. We’ve already seen that Toby and Kate may not be on great terms in the far-off timeline, and the same may be said for some of the others.

“Rebecca just makes the most sense. I could possibly see them heading to Rebecca's wake. I do think a lot of side stories will happen involving the rest of the cast from the present timeline to the future timeline,” wrote Reddit user pickle_popsicle. “I think there will be quite a bit of tension between different people and whatever happens in the future will bring everyone closer together.”

Others have suggested that she has Alzheimer’s, and the entire show is her family’s way of reminding her of all the good that came of her life. “This would actually make a lot of sense. It would explain all of the flashbacks from a storytelling perspective,” wrote another user, its__your__mom. “Every time we are seeing a flashback, it's a different family member visiting Rebecca and telling her stories about her life and family.” Oof, please, let's hope that's not the case.

Whatever happens, everyone can know one thing for sure — it's going to be unbearably sad.