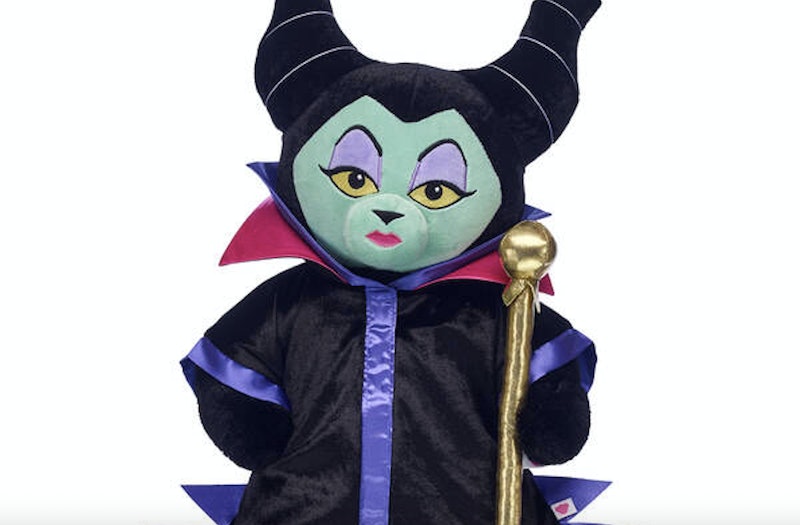 Some people are Disney Princess people. Some people, though, are Disney villains people — and if you happen to be the latter, here’s something that should tickle your sense of villainous fun: You can get a Maleficent-inspired bear at Build-A-Bear Workshop now. Cute? Kind of. Cuddly? Yep. Perfect for the budding supervillain in your life? Absolutely. Even if that budding supervillain happens to be, um, you. I don’t judge. Heck, I’m that budding supervillain, so, hey, let’s maybe hang out and think evil thoughts over a glass of red wine (or maybe a Maleficent Frappuccino) together, shall we? We can bring our brand-new Maleficent bear friends with us to help out as we plot to overthrow the patriarchy. Sounds like a good time, no?

When Build-A-Bear originally launched in 1997, it carried exclusively original characters; later on, though, once the company was firmly established, the Workshop began licensing products, as well — from Pokemon to the NFL, NBA, and other sports-related lines. These days, Disney characters make up a large portion of Build-A-Bear’s licensed products, with options covering a wide range of properties: Whether you’re into classic characters like Mickey and Minnie, more recent inventions like Anna and Elsa, or even kooky and spooky options like Jack Skellington and Sally from The Nightmare Before Christmas, there’s a Disney option for you.

Several new Build-A-Bear lines have been released in recent months capitalizing on the live action remakes of classic Disney animated features, like the Lion King and Aladdin collections — and the Maleficent bear, I would argue, is in that same vein. (Sleeping Beauty was originally released in 1959; Maleficent came along in 2014; and Maleficent: Mistress Of Evil just arrived on Oct. 18.) She does, however, more closely resemble her original animated than her live-action incarnation. Her body is black; her face, a sickly green; her eyes, decked out in purple eye shadow; and her ears… aren’t so much ears as they are Maleficent’s trademark horns. She comes with a black and purple robe as her outfit, along with a gold scepter accessory equipped with an elastic loop so the toy can “hold” the thing in her hand. You can’t plot and scheme without something regal nearby, right? Right. Mwahahahaha.

Alas, the items don’t seem to be available for purchase separately, so if you want a bear that looks like Maleficent, you’ll have to spring for the whole bundle; it’ll set you back around $57 for the lot. Additionally, the Maleficent bear notably does not have a sound box inside her — so, unlike, say, the Nightmare Before Christmas bears, she won’t sing a song when you squeeze her paw. Lastly, she’s an online exclusive, so you can’t get the Maleficent bear in stores right now. Just, y’know, FYI.

But evening knowing those caveats, it’s hard to deny the appeal of a bear dressed up like one of pop culture’s most iconic characters. You can nab the whole set here. Anyone have any spindles handy?

More like this
Ashamed Of Your Screen Time Stats? Here's How To Change That
By Alexis Morillo
Learning To Love, Not Judge, The Lunchbox Wives Of TikTok
By Esther Zuckerman
I Spent 2 Years Trying TikTok’s Dating Advice
By Kailynn Johnson
How To Turn Off TikTok Profile Views So You Can Stalk Other Accounts In Secret
By Alexis Morillo
Get Even More From Bustle — Sign Up For The Newsletter
From hair trends to relationship advice, our daily newsletter has everything you need to sound like a person who’s on TikTok, even if you aren’t.