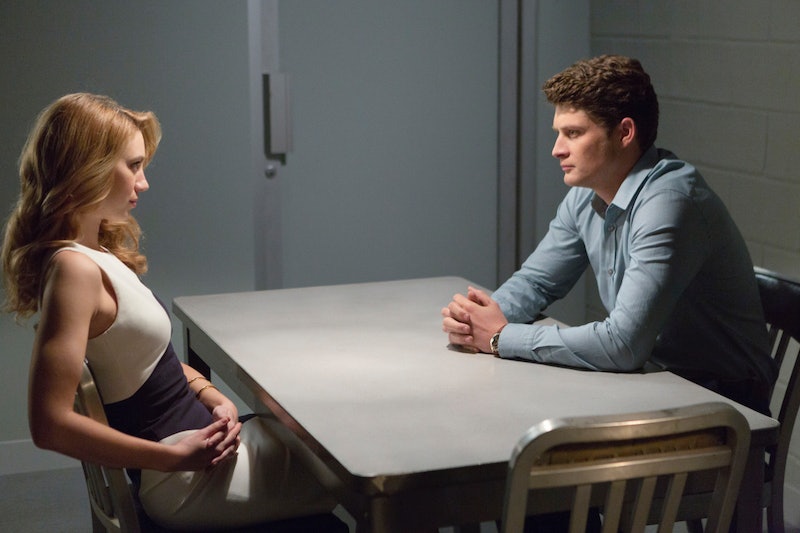 Jason might be willing to give his marriage to Jane a second chance on Jane the Virgin, but he also has eyes for another major character — Petra. And if you think about it, it's entirely plausible that Jason's interest in Rafael's ex-wife is a sign that Michael and Petra will date on Jane the Virgin Season 5. Yes, it's likely a difficult leap for fans to imagine Jane's devoted police detective husband ending up with recently-rehabilitated, but still prone-to-scheming, Petra. But since Michael became Jason from Montana after Sin Rostro faked his death and gave him amnesia, it seems kind of possible — especially because Jason appears to be more interested in crushing on Petra than remembering his wife.

So Jane the Virgin fans might want to at least consider the potential of a Petra and Michael pairing being part of the show's endgame.

All the way back in Season 1, some fans shipped Petra and Michael. And it feels time to reconsider this old theory now that Michael is back and intrigued by Petra. In the first two episodes of Season 5, Jason couldn't help himself when it came to his physical attraction to Petra — much to the understandable annoyance of Jane. Petra, who has been pining for her ex J.R., has been oblivious to his interest so far. But if you're worried about what will happen to Michael by the Season 5 finale if Jane chooses Rafael, then maybe — just maybe — he'd get his happy ending with Petra.

In Season 1, a telenovela-worthy couple switch of Rafael and Petra with Jane and Michael seemed like it could happen relatively easily. But a lot has happened since then. Jane officially put an end to the love triangle between her, Rafael, and Michael by choosing to marry Michael. Petra and Rafael briefly reconciled romantically. Raf, Petra, and Jane (after Michael had presumably died) all had love interests outside of their immediate orbit. And Jane and Rafael finally came back together and were on their way to marriage until Michael/Jason showed up.

Jane can't choose to be with both Michael and Raf — and for now, her choice is Rafael. But it's unlikely their domestic bliss will last that long since Jane is kind of ignoring the very real possibility of Michael getting his memory back. If that happens, she's going to be infinitely more conflicted than she is. But if Michael recovers from his amnesia and she still decides to be with Rafael, doesn't Michael deserve to find love again too? And is it really so wild to think that could happen with Petra?

Of course, a Michael with his memories back might not be so into Petra as Jason is. And let's not forget the very important detail that Petra has shown zero interest in the recently-returned Michael. She's currently still broken up that J.R. has left her and Rosario Dawson's time on the show is probably far from over. Showrunner Jennie Snyder Urman told TVLine about Petra and J.R., "I'm obsessed with that relationship. I love it, I live for it. Their relationship is important in this season in many different ways. The fallout from the first episode and from the finale resonates throughout the season for Petra and for J.R."

Yet, J.R. has never really seemed to reciprocate Petra's strong feelings and their short relationship also had a lot of baggage. So even if they get back together, J.R. might not be it for Petra. Although it would be a bummer to see the one queer relationship on the show fall apart by the series' end.

Still, maybe after all this time and all this heartbreak, Michael and Petra will see each other in a new light. Plus, don't forget that the narrator said that Petra and Michael's "fates were linked" during the Season 3 premiere.

The fate linkage could be explained away by the fact that Michael surviving his surgery in Season 3 led to Anezka keeping Petra paralyzed for longer. But viewers should know by now not to ignore these types of clues. Especially since the very next thing that the narrator said after talking about Michael and Petra's fates is, "No, not amnesia!" in response to Michael pretending he didn't know who Jane was. Now in Season 5, Michael really does have amnesia. So Petra and Michael's sharing fates — also known as destinies — could very well still be a thing.

Before anything could happen between Michael and Petra, Jane needs to figure out what she should do about Jason. Because now that Jane and Petra are so close, there's absolutely no way that Petra could be with Michael unless Jane closed that door for good. But if you're craving for Jane, Michael, Rafael, and Petra all to be in love by the end of Jane the Virgin, this controversial theory might just be the solution.