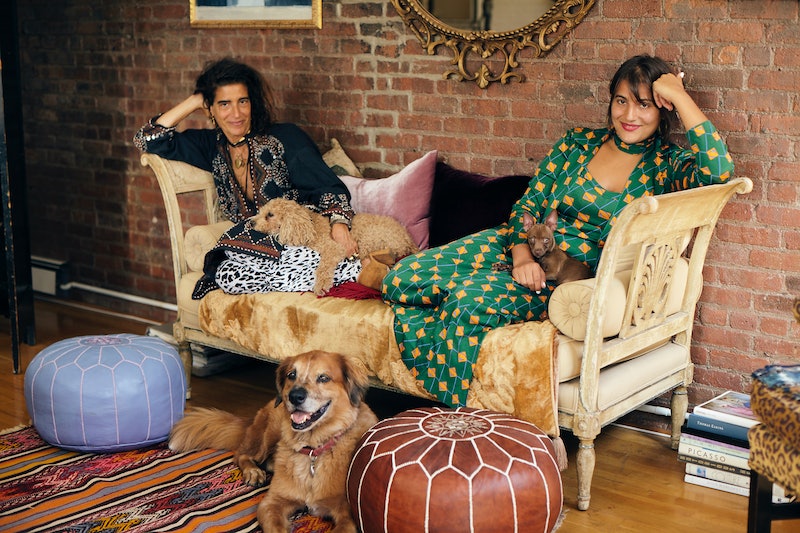 In 2009, Elisa Goodkind and her daughter Lily Mandelbaum were feeling equally disenchanted by mainstream fashion. Elisa, a former stylist, had seen a once-rebellious industry grow, to her eyes, toxic, conformist, and homogenous, while Lily was experiencing the repercussions of that shift firsthand. As a curvy young woman in a world over-saturated by images of thin, airbrushed babes taking up very little space in figures free of blemishes or rolls, Lily struggled to cultivate positive body image.

StyleLikeU was born of their disillusionment and subsequent urge to create an alternative narrative. The video platform features documentary-like series such as Closets and The What's Underneath Project. In the former, Elisa and Lily head into their interview subjects' homes, simultaneously unpacking their wardrobes, influences, and definitions of style. In the latter, individuals strip down to their intimates while being asked even more personal questions about body image, identity, and the marginalization many have faced due to their gender, weight, race, disabilities, or age.

This year, the duo has taken their work off the screen and onto bookshelves everywhere. Featuring approximately 130 snippets from over 500 videos, their new Rizzoli book — True Style Is What's What's Underneath: The Self-Acceptance Revolution — takes readers into the lives, minds, and closets of people whose stories have resonated with StyleLikeU fans over the course of eight years. With chapter titles such as "Disentangle Style From Fashion," "Dress To Impress Your Inner Spirit," "Consume Consciously," "Turn Your Struggles Into Strengths," and "Create Your Own Definition Of Beauty," Elisa and Lily have created a manifesto for living your boldest, freest life. The "styles" celebrated in this book aren't just sartorial. They're mantras for opting out of toxic messaging that devalues people's differences. They're a how-to for celebrating your supposed "flaws."

"We wanted people to have something to carry with them and have for a lifetime," Elisa tells Bustle in an interview. "The stories and the messages are timeless. It was very challenging to create a thread between so many different people, but we ended up doing it with the seven manifestos towards self acceptance, which are the seven chapters of the book [...] It was very exciting to us to see how everyone fell into these seven chapters/manifestos, no matter how different they were on the outside. Internally, they were so connected in their struggle with maintaining their singularity in this homogenous culture."

The differences between the subjects of StyleLikeU's videos and book are undeniable. A unique aspect of the project is that Elisa and Lily bring together celebrities and influencers alongside everyday people whose names are more or less unknown.

On one page, comedian and Orange Is The New Black actor Lea DeLaria explains her reclamation of the term "butch," while designer and activist Wamuhu Waweru discusses supporting indigenous women and their crafts on another. Artist and poet Alok Vaid-Menon unpacks the gender binary on one page, as photo journalist, artist, and octogenarian Lisl Steiner celebrates the radicalness of her choice not to have reconstruction surgery after her breast cancer diagnosis and mastectomies on another.

Despite their differences, however — sartorial, professional, or otherwise — what almost every artist, actor, model, designer, musician, poet, or extraordinary creative in these 271 pages has in common is the feeling of being othered — of being cast aside, at one point or another, for something about their identities.

"Most people feel badly about themselves, but don't realize why," Elisa tells Bustle. "It is programming; coming from a world that makes them hate themselves so that they buy things. It's a great awakening just to realize that you aren't born feeling so restricted and inhibited."

Every page of this book features vivid, bright, loud photographs alongside written excerpts from each individual's original video. Because the experience of reading is such a visual one, we get to truly see that what all of these humans also have in common is their push-back against the aforementioned othering. Melanie Gaydos, for example, is acting and modeling despite being born with ectodermal dysplasia. "I'm black, I have albinism, I'm gay, I'm open," model Shaun Ross proclaims proudly in the same chapter. "Losing weight is the easy thing," musician Stacy Barthe contemplates. "It's the mental weight that's hard." In all seven chapters are success stories. But not just the success of fame or fortune or generally capitalist ideals of what it means to be successful. It's success in the form of self-love, and in the refusal to apologize for individuality, that's far more tangible.

This refusal to apologize for one's differences is a core takeaway of Elisa and Lily's written work. "You don't have to change yourself to be beautiful," Elisa says. "The things that society deems as flaws are unrepeatable in you and embracing that is the beauty. And if we each begin to accept ourselves it is the greatest form of activism because we take our brains and power back and create a different world. A world where getting dressed is an act of self love and freedom."

Finding such acceptance isn't easy, of course. Much of the disillusionment Elisa and Lily felt in 2009 would still be valid today. All around us are advertisements and articles seeking to convince people that they are too fat, too brown, too queer, too old, or generally too much. These messages don't just permeate mainstream fashion. They permeate everything.

However, Elisa believes that "if people begin to disentangle style from fashion, separate what is your style from what fashion is dictating, and consume consciously, take care as to what your are consuming in media, this is a great first step." You don't have to participate in diet ad consumption or teeth whitening propaganda or waist training fads or any of the BS. Instead, you can curate your intake of imagery into something that celebrates the human body in its myriad incarnations. You can dress in the garments that'll bring you joy, regardless of whether some arbitrary rule says the ensemble "complements" your shape or skin tone.

The timing of this manifesto might just be perfect. In moments that are politically challenging, if not downright troubling, focusing on style can often seem trivial. But as Elisa says, "There is nothing more important than self acceptance. If we all stopped hating ourselves, we could change the world. We would not fear one another and we would not waste our lives brainwashed by media, corporations, marketing, and not knowing who we are. People think that fashion is trivial because it has become a soulless industry that enforces conformity. But style is who you are, and what would be more important than that?"

When much of the world tries to tell you that celebrating who you are is wrong, preserving authenticity and individuality is indeed among the greatest forms of rebellion. The 130+ people in this book — like the mother and daughter who brought them together — believe macro peace begins with the micro. "If we feel good about ourselves then we will accept ourselves and others and we will be connected to each other," Elisa says. "It would help to create a more peaceful world."

It may seem idyllic — to some, it may even seem naive — but what do we have to lose? If nothing else, the subjects of this hard cover are proof that finding self-love is worth a try.

More like this
Here's How To Practice Self-Love In Small Ways Every Day
By Mackenzie Sylvester
The 20 Best Audiobooks To Fall Asleep To
By Aoife Hanna and K.W. Colyard
30 Books To Read This AAPI Heritage Month
By K.W. Colyard
How This Founder Manifested Ariana Grande As A Brand Ambassador
By Dominique Norman
Get Even More From Bustle — Sign Up For The Newsletter