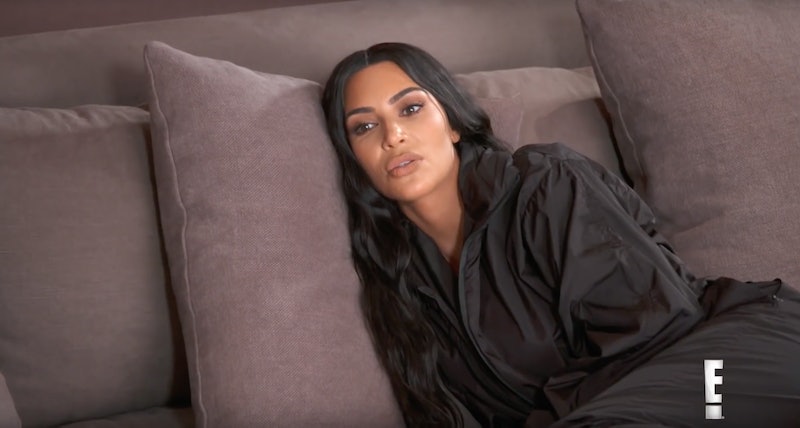 Is Khloé Kardashian ever going to catch a break in the love department? No one can blame her sister Kim Kardashian for expressing concerns over Khloé's relationship with Tristan Thompson. A clip was released from the June 2 episode with Kim discussing the family's trip to Bali with Khloé's best friend Malika Haqq.

After talking about her reading with a medium in Bali, Kim asked Malika, "Did Khloé tell you about her reading?" After Malika revealed that Khloé did not mention it to her, Kim was very shocked. Then, Kim gave Malika the rundown of what the medium said: "She has a lot of hurt in her heart because her guy has really hurt her."

In a flashback scene from the Bali trip, the medium told Khloé, "Sometimes you don't trust the person that you are with now." And that is completely understandable. Khloé and Tristan have been through a lot and this was filmed before their recent split. After, Kim disclosed to Malika, "She said she's been going back and forth and can't make a decision in the relationship. I so feel that."

In one of her on-camera interviews, Kim confessed, "I think I'm always concerned about Khloé. Obviously, with everything that they've been through, I don't think you can just forget about it."

Kim's not wrong, especially since the whole world has witnessed their ups and downs. In April 2018, Khloé gave birth to their daughter True Thompson. Just days before True was born, there were many cheating allegations against the Cleveland Cavaliers player. The two of them tried to make their relationship work after that, but as we can see this season, it was a tough time for Khloé.

While Tristan has not publicly acknowledged any of the cheating claims, Khloé has talked about the situation on social media and on Keeping Up With The Kardashians. In February, rumors emerged that Tristan allegedly cheated on Khloé with Jordyn Woods, the longtime best friend of Khloé's little sister Kylie Jenner. In a March appearance on Red Table Talk, Jordyn denied getting "intimate" with the NBA player.

It seems like everyone has an opinion on Khloé's love life, from her fans, to critics, and, of course, her family members. In an on-camera interview for from the upcoming KUWTK episode, Kim explained why she turned to Malika to share her concerns instead of talking to Khloé one-on-one.

Kim remarked, "It's definitely not easy when everything is so public. She tries to handle it on her own, but I just worry about her. As a best friend, I feel like she can really open up to Malika." Hopefully. At the very least she needs to confide in someone. In another scene from the next episode, Khloé invites Malika to Cleveland for "family time" with her, True, and Tristan, which is really sweet phrasing since it reinforces that Khloé views Malika as a part of the family.

However, there is another preview from the upcoming KUTWK episode that would not be considered "sweet." Khloé tells Malika, "One stupid weekend. Look at what it did to three years of a relationship." This seems like it could be a reference to the Jordyn interaction, but the viewers will have to tune in to be sure.

In reponse, Malika was very direct when she asked "Are you still in love with him?" And, of course, the clip cut off at that point.

No one can blame, Kim, Malika, or even the fans for expressing concerns over Khloé's love life. It's so easy to root for Khloé and it's just so difficult to see her wronged, especially in such a public manner.