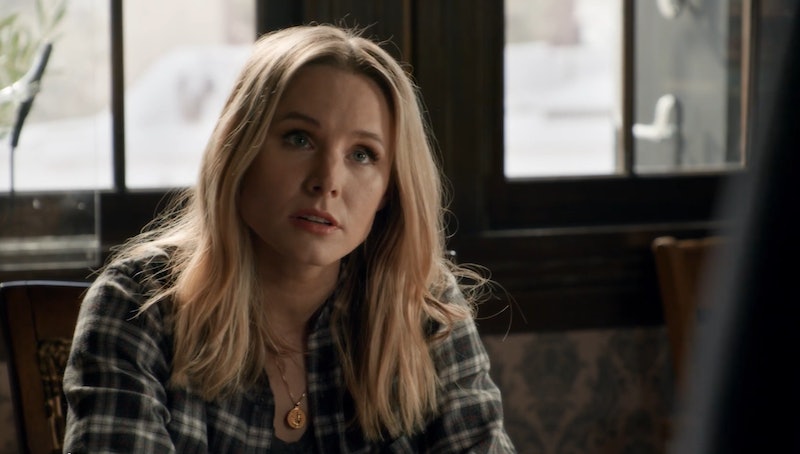 The Veronica Mars Season 4 revival is going to be truly explosive. Hulu dropped a new Veronica Mars trailer on June 14, and it seems there's a new villain in town. After a decade away from Neptune, Veronica (played by Kristen Bell) is welcomed back to her hometown with a bang — literally. While checking out a beach volleyball game, the beloved sleuth witnesses a nearby explosion, prompting her to immediately spring into action.

Who exactly is behind the bombing? Well, after watching the new sneak peek of Hulu's eight-episode limited series revival (available to stream beginning July 26), it seems a shady character named Clyde Prickett (portrayed by Oscar-winning actor J.K. Simmons) is the prime suspect. And you know Veronica is on the case.

During a cocktail party of some sort, Big Dick Casablancas (David Starzyk) introduces Veronica and Logan (Jason Dohring) to his "friend and associate" Clyde. "We go back to when I was on the inside," explains the infamous real estate developer, who Marshmallows will remember went to prison for scamming investors, during the original Veronica Mars TV series, which UPN (and, later, the CW) ran for three seasons from 2004-2007. (There was also a fan-funded movie in 2014.)

When Simmons joined the project in November 2018, The Hollywood Reporter further elaborated that his character "served 10 years for racketeering and was the first inmate in Chino to offer protection" to Big Dick Casablancas when he entered the prison. "Now a free man, Clyde works as [Big Dick's] fixer. He's the smarter and more dangerous of the two and has a network of fellow ex-cons he uses to do his dirty work," THR also explained.

Of course, it doesn't take long for Veronica to become suspicious. "There's something about him that's off, but does he strike you as a mass murderer?" her dad, Keith (Enrico Colantoni), asks her in the new trailer. While she remains unsure, she does, however, know that "they're guilty of something."

Cue clips of a series of seemingly shady dealings, including Clyde passing off an envelope full of cash in the front seat of car. Eventually, he confronts the elder Mars. "Consider me in your corner, Keith," he says. "Unless you're going against me."

That money exchange may have been a clue, too. When another new character, Patton Oswalt's Penn Epner AKA the “best pizza delivery guy in Neptune” appears at Veronica's door, he issues this advice: "Follow the money, Mars." According to Deadline, Penn's passion is "true crime" and is a "frequent poster on unsolved murder websites." He hilariously "barely shuts up at all," the website also reported.

Oswalt will be joining other previously announced Veronica Mars newbies Dawnn Lewis (as Neptune's new police chief Marcia Langdon) and Kirby Howell-Baptiste — who also appeared with Bell in NBC's The Good Place as neuroscientist Simone — as Neptune nightclub owner Nicole. Naturally, fan favorite, the junior Dick Casablancas (played by Ryan Hansen), is also featured throughout the trailer. Deadline also previously revealed that another beloved character, Deputy Leo (Max Greenfield), will be reporting for duty in the Veronica Mars revival, too.

It sounds like it would be absolutely criminal to miss out on Hulu's upcoming Veronica Mars installment.