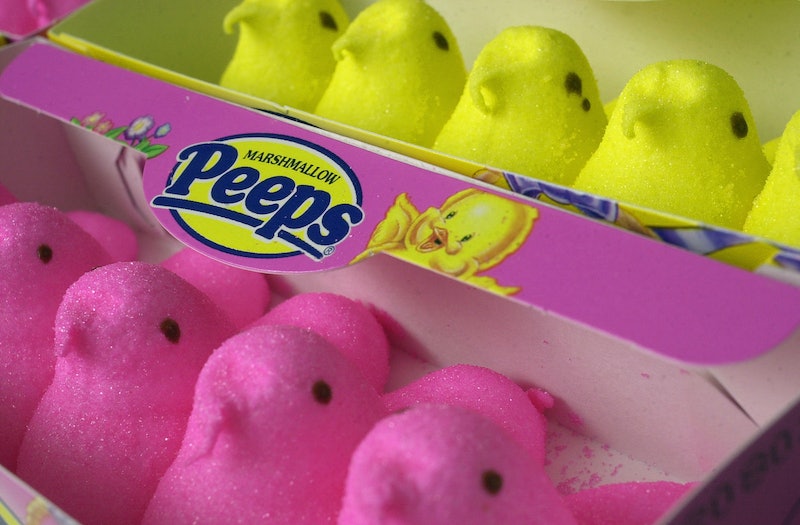 Spring might still be a few months away, but that’s not stopping everyone’s favorite, neon-colored, marshmallow treat from announcing some big news: For the first time ever, one lucky person and three of their favorite people will get the chance to tour the Peeps factory in Bethlehem, Pa. If you’ve ever wondered exactly how one manages to shape a marshmallow like a tiny little bird (or bunny, or bat, or whatever your favorite Peeps shape is), here’s your chance to find out — if, that is, you’re the winner of the Peeps Helping Peeps sweepstakes.

Peeps’ parent company, Just Born, is running the sweepstakes in conjunction with the Greater Lehigh Valley chapter of the non-profit organization United Way Worldwide. Called Peeps Helping Peeps, it offers folks the chance to win a tour of the Peeps factory when they donate to United Way of the Greater Lehigh Valley. Donating via the sweepstakes between now and April 8, 2019 throws your hat into the ring, with the grand prize consisting not just of the tour, but also all the bells and whistles that go along with it. How’s that for a (literally) sweet deal?

Since the 1950s, Peeps have been made by Just Born at their headquarters in Bethlehem, Pa. — but Just Born didn’t invent the sweet little marshmallow treats. They were originally the creation of the Rodda Candy Company, which was based in nearby Lancaster, Pa. Rodda was known primarily for their jelly beans, but when Just Born — which had originally been formed by Sam Born in New York in 1923 before moving to Pennsylvania in 1932 — acquired the company in 1953, they were equally intrigued by a different confection Rodda peddled: Marshmallows handmade into the shape of a bird.

Shortly after the acquisition, Sam Born’s son, Bob, created a machine he called “the Depositor,” which automated the marshmallow birds’ creation process, taking the treats’ production time from 27 hours for a single tray to just six minutes — and thus, Peeps as we know them today emerged.

Not unlike Willy Wonka’s chocolate factory, though, the Peeps factory has kept it doors shut to visitors in the decades since Just Born began making them — until now, thanks to the Peeps Helping Peeps sweepstakes.

Said Just Born’s senior vice president of sales and marketing, Matt Pye, in a press release, “Although we’ve had many requests and lots of fans show up at our doors over the years, the PEEPS factory has never been open to the public. We couldn’t think of a better reason to open our doors for the first time ever than by teaming up with our local United Way to help give back to the community that PEEPS calls home.”

The grand prize for the sweepstakes includes a trip for four to Bethlehem, Pa., including hotel and airfare if needed, a tour of the Peeps factory itself so you can see exactly how the treats are made, and a $250 shopping spree at the Peeps And Company store.

Founded in 1887, United Way Worldwide is a non-profit organization geared towards “[improving] lives by mobilizing the caring power of communities around the world to advance the common good,” according to its mission statement — a goal it works towards with the help of partnerships formed with schools, governments, businesses, volunteer organizations, and more. Its primary area of focus are education, financial stability, and health. With nearly 1,800 chapters throughout the world, it’s one of the biggest charities out there. On Charity Navigator, United Way Worldwide has a score of 94.69, with the Greater Lehigh Valley chapter specifically scoring 90.27.

Until April 8, you can enter the Peeps Helping Peeps sweepstakes three different ways: Donate $5 to United Way by texting “peepsunited” to the number 40403; donate $5 to United Way online; or mail a 3x5 card with your name, mailing address, email address, and phone number to United Way Peeps Sweepstakes Dept. S7794, PO Box 4006, Grand Rapids MN 55730-4006. Each entry grants you one chance to win; the more times you enter (and, subsequently, the more times you donate), the greater your chance of winning. The winner will be notified sometime around April 12, with their name being officially announced on April 18 at United Way’s Day of Caring event.

More like this
TikTok's Butter Board Might Be The New Cheese Plate
By Emma Carey
On TikTok, Tinned Fish Date Night Is The Latest Viral Food Obsession
By Emma Carey
Deliveroo Is Selling Lotus Biscoff Cinnabons Now
By Darshita Goyal
10 Stranger Things-Inspired Halloween Costumes For True Fans
By Emma Carey
Get Even More From Bustle — Sign Up For The Newsletter