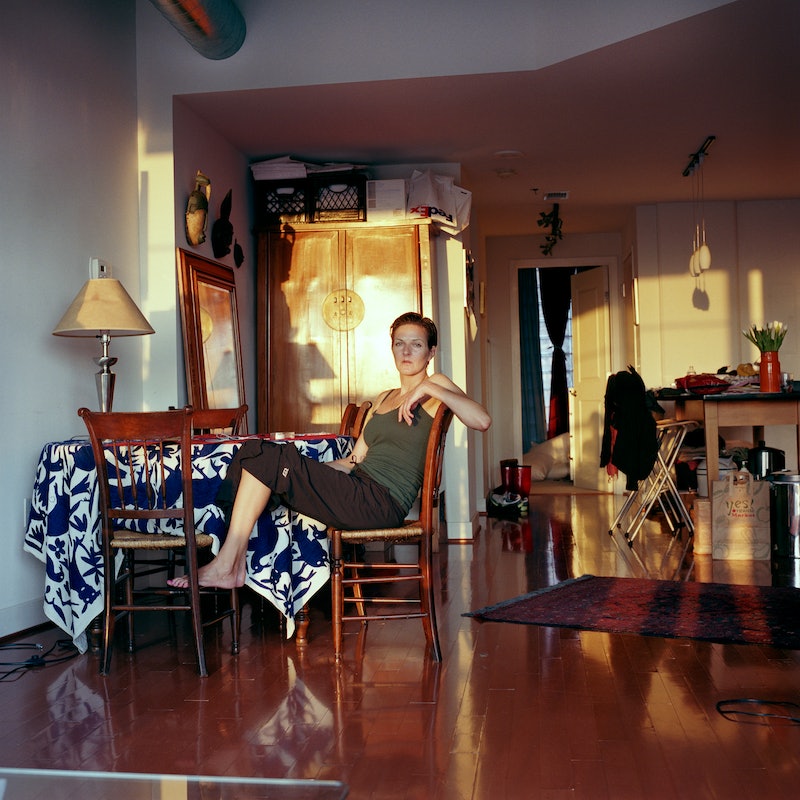 Right now, I have 418 Facebook friends. Of these, I can count the number I see face to face with any kind of regularity on one hand. But that doesn’t necessarily mean that I’m not “really” friends with the remaining folks; as photographer Tanja Hollander’s portrait series Are You Really My Friend? points out, the line between digital and “real life” friendships doesn’t have to be as firm or distinct as we often think it must be. For the series, which is currently on display at the Massachusetts Museum of Contemporary Art (MASS MoCA), Hollander took photographs of all her Facebook friends in real life — and as the photographer tells Bustle in an interview, “I don’t think you can differentiate between online and IRL friends. I mean, we all exist both on and offline. It’s just a different way of communicating."

According to MASS MoCA's exhibition guide, Hollander first conceived the idea for Are You Really My Friend? on New Year’s Eve in 2010. Seated in her kitchen in Auburn, Maine, she was spending the time writing letters — one on paper, written in pencil and addressed to a friend who was deployed in Afghanistan, and the other digital, sent via Facebook to a friend who was working on a film in Jakarta. The moment struck her: Here she was, talking to two different people from very different parts of her life and in totally different parts of the world... simultaneously. How incredible is that? As she recounted in her 2012 TEDx Talk, Hollander then began scrolling through her list of Facebook friends and realized that they, too, were both spread across the globe and from different parts of her life.

In some ways, the moment was everything that luddites bemoan about our technologically enhanced world. “I was … thinking about how crazy it was,” Hollander remarked in her TEDx Talk. “I was home alone, on New Year’s Eve, on Facebook,” rather than out doing whatever it is that people typically do on New Year's Eve. On the other hand, though, she was also thinking about how amazing it was that, right at that moment, she was able to talk to two people who meant so much to her, even though they were in completely different parts of the world, from both each other and from where she was. It’s the great contradiction of the digital age: Thanks to technology, we can simultaneously feel incredibly far away from and incredibly close to the people we care about.

Inspired by this moment, Hollander set out to capture pictures of all the people she was friends with on Facebook, bringing together the online and offline worlds in a fascinating and intimate photo series. She contacted 626 friends, but wasn’t able to take photographs of all of them; 67 didn’t respond, 53 didn’t schedule to meet, 21 turned the project down, 14 were businesses, 13 were unfriended — either they unfriended Hollander or she unfriended them — five cancelled, and two were no-shows. She did, however, shoot 430 portraits over the course of just over five years, and the results are stunning.

Hollander kicked off the project in Washington, D.C. in March of 2011. The subject? Photojournalist Samantha Appleton. Appleton had shot Barack Obama’s 2008 presidential campaign for The New Yorker; the following year, she became one of the White House’s official photographers, where she remained until the fall of 2011.

At the time, Appleton wasn’t a close friend; they knew each other because many years ago, she had dated another friend of Hollander's. As Hollander tells Bustle, however, Appleton was the first to respond to her email announcing the project, saying how much she loved the idea and offering to give Hollander a tour of the West Wing and show her around D.C. in exchange. “It was one of the most amazing experiences,” Hollander noted in her TEDx Talk. “This person that I only knew peripherally became a close friend, and also a huge supporter of the project. It was an incredible way to start out this project, with such kindness and generosity.”

That spirit of kindness and generosity would end up characterizing the entire project, right up until Hollander shot the final photograph in the series in Tel Aviv, Israel in June of 2016. “I was most surprised, even up to the very last portrait … how welcoming people were — feeding me, giving me a place to stay, showing me around their communities — especially those that I didn’t know very well,” she tells Bustle. Indeed, Are You Really My Friend? ultimately isn’t just about the photographs themselves; it’s about everything that went into taking them, as well — about the journey towards their creation, both literal and metaphorical.

“It became clear very early on that documenting the trips were as important as the final portrait,” says Hollander. “I couldn’t help but learn about myself, traveling alone for five-plus years — I spent a lot of time in the car thinking. I think I learned how to listen, to all kinds of stories and feel empathy and compassion in a way that I hadn’t before. To be kinder and less judgmental, a skill that has come in handy post-election.”

Facebook, FaceTime, Skype, Google Hangouts — we often think of these pieces of technology as poor substitutes for actually spending time with people face to face: Better than nothing, but not as good as "the real thing." But maybe we need to reexamine how we think about them — as tools that facilitate not a “lesser” version of a friendship, but rather, simply a different one. As Hollander notes, it isn’t that seeing people “in real life” isn’t important; indeed, studies have shown that actual face time does matter for our health and happiness. But connecting in other ways matters, too. “When time or distance or responsibilities can’t make that happen [in real life], value the connections you can make — whether they are on Facebook, Instagram, FaceTime, [or] texting,” says Hollander.

It's valuable advice. “We have important people in our lives at different times, for different reasons. They weave in and out, and that doesn’t mean that the connection is any less valuable,” she adds. “As life changes, friendships do, too, and that’s OK.”