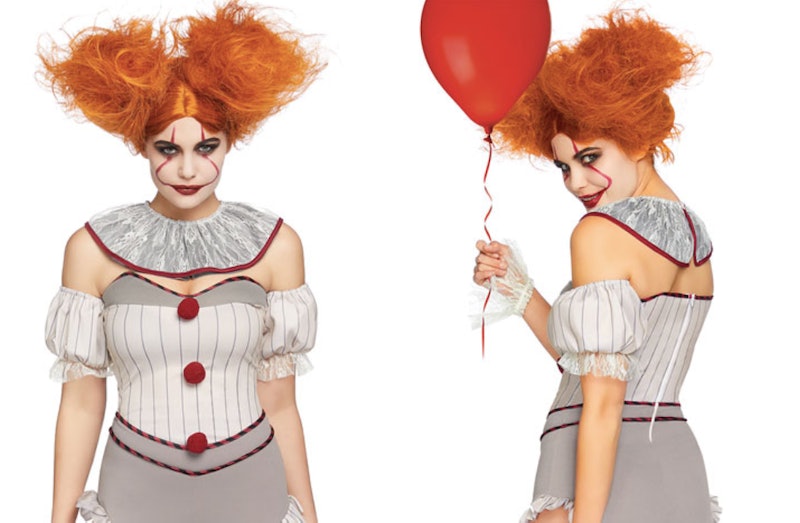 When you woke up this morning you probably didn't imagine that your eyes would be forced to behold this sexy 'IT' costume from Yandy, but that's life for you — one minute you're minding your own business, and the next you're getting your field of vision interrupted by a murderous clown in a cut-out corset. You'd think that something Yandy, the Patron Saint Of Sexy Halloween Costumes, called a "Killer Sewer Clown Costume" wouldn't look so alluring, but here we are, folks. Stuck in 2019 where even being Pennywise the Dancing Clown/evil incarnate isn't enough to make you swipe left.

And you know what? Good for her. I can't say I know much about the plot of IT or IT Chapter 2 because I am an unabashed coward who jumps at her own shadow, but I know enough to say I would probably follow sexy Pennywise into the sewer. She seems fun. Like she'd definitely torture you and all your friends within an inch of your lives, but at least have some sweet bops on in the background while she did it. It's an aesthetic! If this is the kind of energy you're looking to exude for Halloween this year, you can get yourself your own Killer Sewer Clown ensemble online for a mere $39.95.

Bear in mind, though, that the costume on Yandy only includes "a gartered romper with a sweetheart neckline, attached clear straps, a striped bodice with red pom poms, lace edging, a back zipper, striped arm puffs, lace wrist cuffs, and a lace neck piece" — to fully realize your hostile circus performer dreams, you'll have to get that red wig, the fishnet thigh-highs, and the infamous red balloon on your own. (I'd invest in that balloon early; given the number of people who wore IT costumes in 2017, when the first film was released, there are going to be a lot of Party City employees blowing up balloons for tipsy clowns this year.)

If you're not feeling luring any unsuspecting neighborhood children into a sewer this year but still want to get your sexy on this Halloween, Yandy, as usual, is here to help. While the site's stock sexy fare is so vast that there are likely more costumes on it than you could wear in a calendar year, the newer ones this year included a few standouts. For instance, the internet was recently graced with the images of the sexy Bob Ross costume (er, "Happy Tree Painter" costume), as well as this sexy Mister Rogers costume (otherwise known as "Nicest Neighbor" costume). This all goes to show that there is very little you can't make sexy — not your terror, not your nostalgia, and apparently, not even your politics (shoutout to the "Sexy Tariff" costume, which also made its debut). The question really isn't whether you can make it sexy — the question really just how willing you are to freeze your butt off in mid-autumn in the name of the Halloween 'gram.