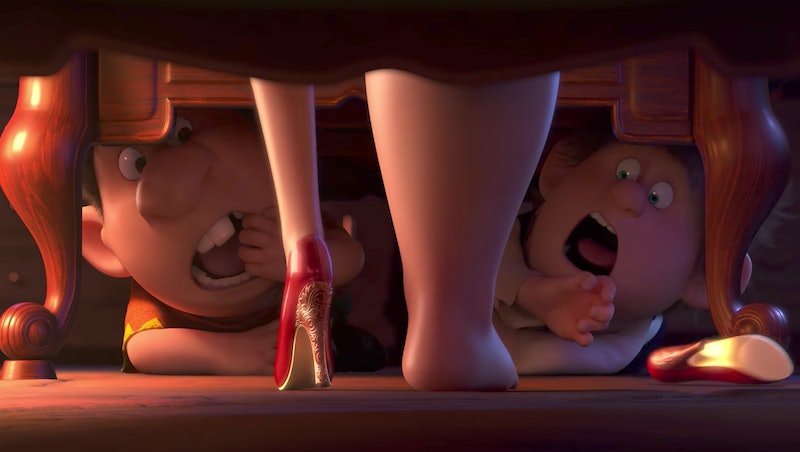 Children's movies hold a special place in our hearts, but we've long questioned what they teach young girls. And a new release isn't doing anything to help matters. An upcoming Snow White spoof has been accused of body-shaming, and one look at the film's promotional poster makes it easy to see why.

Bustle reached out to Locus Studios and received a reply from Sujin Hwang, one of the film's producers:

As the producer of the theatrical animated film“Red Shoes and the 7 Dwarfs,” now in production, Locus Corporation wishes to apologize regarding the first elements of our marketing campaign (in the form of a Cannes billboard and a trailer) which we realize has had the opposite effect from that which was intended. That advertising campaign is being terminated.

Our film, a family comedy, carries a message designed to challenge social prejudices related to standards of physical beauty in society by emphasizing the importance of inner beauty. We appreciate and are grateful for the constructive criticism of those who brought this to our attention. We sincerely regret any embarrassment or dissatisfaction this mistaken advertising has caused to any of the individual artists or companies involved with the production or future distribution of our film, none of whom had any involvement with creating or approving the now discontinued advertising campaign.

Red Shoes and the 7 Dwarfs has a chance to take the Snow White classic and redefine it a bit with fewer stereotypical gender expectations than children's movies have typically placed on little girls. But judging by the trailer, it falls horribly short. On Tuesday, body-positive model Tess Holliday tweeted a picture of the poster, which features a slender Snow White next to a fuller-figured one. The problem is in the text: "What if Snow White was no longer beautiful and the 7 Dwarfs not so short?" The implication here is clear, as tweeted by Holliday: "no longer beautiful" and "fat" are one in the same. Snow White loses her desirability once she packs on a few pounds. It implies that the woman who was seconds before exciting and pleasing to the eye suddenly becomes displeasing and ugly, all because of her size and shape. Is this a message we want to teach young, impressionable children?

Things only get worse with the film's trailer. In it, two dwarfs are seen watching Snow White undress without her knowledge (which, dear God, is a whole new problem in and of itself), eagerly awaiting the moment she takes it all off. But when she does, her true appearance is revealed: a plumper, curvier version of the same woman. The dwarfs appear disgusted, and the message is clear: Fat is ugly.

It's a scary idea that we continue to battle — that a woman's worth is reduced to unrealistic, damaging standards, like that skinny is preferable to fat. That body size has any indication on our attractiveness or inherent worth as human beings. That no woman can be attractive if she's not super svelte, the way Snow White used to look. All the while, we're teaching young girls that if they want to be well-liked and desirable, they'll have to adhere to this arbitrary and often unhealthily achieved aesthetic.

Add this to the list of ever-growing concerns about children's movies. Early Disney princess narratives are hardly feminist (although to be fair, some Disney movies have challenged gender stereotypes). Look at Sleeping Beauty, for instance, who is literally SOL until a prince kisses her when she's not even awake to be like, "Yeah, sure, OK, you can kiss me." The original Snow White centers around men (and their satisfaction), with the only other woman in the film being the evil old lady. Then there's Cinderella. Oh, Cinderella. She's hot but poor, so she has to keep her distance from the prince so he doesn't learn the truth. She was ready to settle for her less-than-fantastic life, but fortunately, the prince swept her off her feet and fixed everything for her. Whew! Close call. Ariel doesn't even have a voice, for Pete's sake.

And the boys are no exception to the rule. These movies have been problematic in teaching boys about masculinity, too. They show them that women are objects to be rescued, all men should want to be with women, and a certain aesthetic — specifically, buff — is deemed attractive, while others are not. The outcome is the same: Anything that deviates from this standard is simply unacceptable.

You may be thinking that the whole situation is NBD, but children's movies have been found to leave a noticeable imprint on kids' personalities and development emotionally and cognitively. The "princess effect," or "princess culture" as some people have dubbed it, takes a toll on how girls grow into women, and how they evaluate their own worth. If children were able to differentiate between pure entertainment and what to apply to their own life, that would be one thing, but for many of them, fiction and reality blur into one. Thus, they see slender, graceful, soft-spoken, seemingly vulnerable female characters in movies — in desperate need of saving, incapable of grabbing their own lives by the cajones – and think, "That's what I want to be." (Side bar: If you're really interested in this whole topic, check out Cinderella Ate My Daughter by Peggy Orenstein.)

BRB. Gonna go slap myself in the face with a brick. It'll hurt less than these Twitter responses.

Of course, there's an off-chance that the movie has some underlying feminist lesson, but that's doubtful. Why? Simple. If the promotional poster and trailer focus on the way Snow White looks, I'm not expecting much more from the movie other than an "OMG she's fat! Now who are we going to watch undress?" type of thing. Besides, the poster — while out of circulation now — still says pretty much point-blank that she's not pretty anymore because she's bigger.

The entire message is incredibly tone-deaf. Echoing what Holliday tweeted, how did this even happen in the first place? Did this material actually pass who knows how many pairs of eyes, and everyone seriously said, "Yup! Looks good to me!"? If that's the case, it certainly says a lot about where our culture currently stands how we continue to view women and their bodies (and it ain't good).

More like this
Black Women's Equal Pay Day Highlights An Upsetting Problem
By Brandi Neal
How To Politely Reject Someone Who Keeps Asking You Out
By Laken Howard and Lexi Inks
Help! I'm Not Getting Any Attention On Dating Apps. What Can I Do?
By Sophia Benoit
Here's What It Means If You See 888 All The Time
By Kristine Fellizar and Brittany Beringer
Get Even More From Bustle — Sign Up For The Newsletter