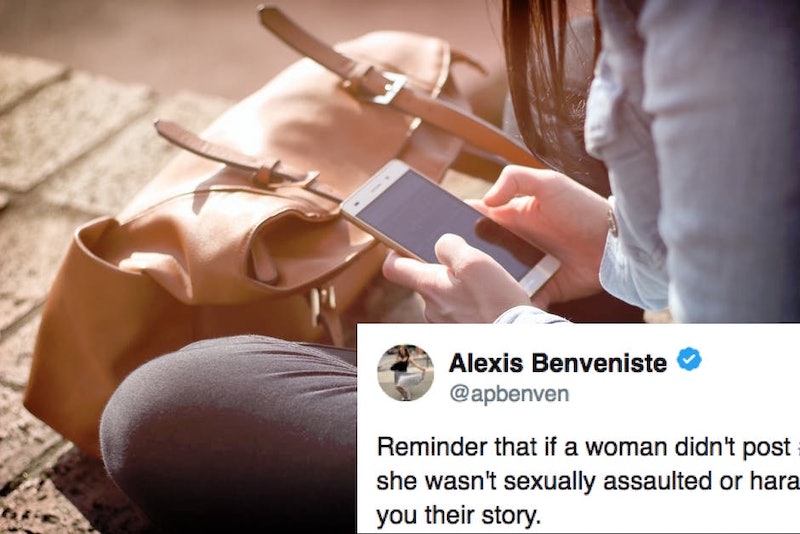 For days now, the words “Me Too” have ricocheted across social media. My Facebook feed has been a virtual wall of them: Woman after woman confirming that, yes, sexual harassment or assault is a part of every single one of our lives. But we also cannot ignore the importance of the silent “MeToos,” a fact which writer Alexis Benveniste pointed out in a simple yet powerful tweet on Monday morning. “Reminder that if a woman didn't post #MeToo, it doesn't mean she wasn't sexually assaulted or harassed,” Benveniste wrote. “Survivors don't owe you their story.” It’s a reminder that the societal change that is so badly needed to dismantle rape culture is not the responsibility of those who have survived it. In order to make this change, it requires all of us: Those who have assaulted or harassed other people need to own up to their behavior and work to change it, and those who have stood by and witnessed assault or harassment happen and simply brushed it off or excused it need to step up and do the work to stop it. (Bustle reached out to Benveniste regarding the resonance of her tweet, and will update this post upon reply.)

“Me Too,” while powerful, has also been fraught for a lot of reasons. There is, for example, the fact that a "Me Too" movement was actually created 10 years ago by a black woman, Tarana Burke, although in the recent amplification of the hashtag, she has been largely left out of the story. There is the fact that hashtag activism can very easily become slacktivism. There is the fact that “Me Too” may be triggering for some — for many. And there is, as Benveniste points out, the fact that survivors do not owe anyone their stories.

There are a huge number of reasons someone may choose not to come forward about harassment or assault they’ve experience — a point which New York Times reader K made in a powerful comment on one of the outlet’s Harvey Weinstein articles last week. The stakes are high for those who do step forward; because of the fact that rape culture is real, women and non-binary folks have everything to lose if they speak up. Their jobs or their livelihoods may be on the line; their reputations may be on the line; their personal safety may be on the line; and on, and on, and on.

These, and so many more, are among the absolutely valid reasons for not posting “Me Too.”

(This isn’t to say that men can’t or don’t suffer from harassment or assault. Of course they can, and of course they do, and of course it is terrible and should not happen to anyone. Right now, though, what we’re talking about is the way that women and non-binary folks suffer from it disproportionately, and the way that deeply ingrained societal sexism and rape culture perpetuate this disproportionate suffering.)

I get it. Looking at the uglier parts of yourself is hard. But this kind of self-reflection is absolutely necessary for the dismantling of rape culture. We need to acknowledge when we screw up, and we need to work to be better moving forward.

Yes, talking about this stuff matters. The stories of those who have chosen to step forward matter, and everyone who has spoken up is enormously brave for doing so. But as the Miss Representation Campaign pointed out in a Facebook post highlighting Benveniste’s tweet, although “Me Too” underlines the pervasiveness of sexual violence and rape culture, it is not on survivors’ shoulders to solve this problem. Wrote the Miss Representation Campaign, “It’s on all of us to change this toxic status quo.”

It is not the responsibility of oppressed groups to educate privileged people about their oppression; it’s the responsibility of privileged people to educate themselves. There’s a whole internet’s worth of information out there that will enable you to do that work yourself: People who are part of oppressed groups have chosen, bravely, to speak out; read their stories. Research studies make stats and facts readily available; find those stats and facts, and make an effort to really understand what they mean. Many groups and people, including non-profit organizations and activists, detail concrete ways for allies to help; take those suggestions and get to work.

We’ve got a long way to go.