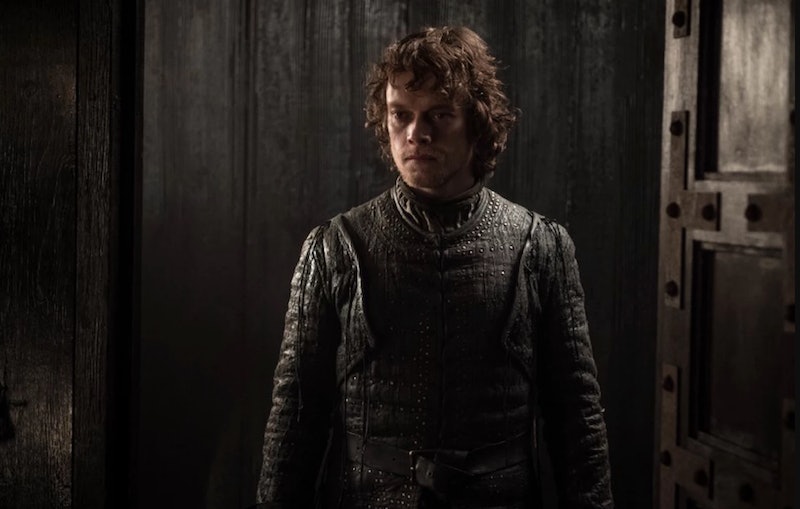 Blame it on the soup. When speaking to Entertainment Weekly about his Emmy nomination, actor Alfie Allen talked about Game of Thrones’ boatload of nominations, addressed fans’ strong feelings about the show’s final season, and shared his thoughts on the Sansa Stark and Theon Greyjoy ship that some viewers suspected was in the ether. Apparently, he hadn’t the faintest idea that there were fans who believed a love connection might've been brewing between the Queen in the North and the honorary member of House Stark. According to Allen, those glances exchanged between Sansa and Theon in the second episode of Season 8 were not of the romantic variety, but of the “the soup was great” variety.

He told the outlet,

There you have it. Allen may not know if Sansa/Theon ship vibes were actually in the air, but he does know that love for Ser Davos's stew was in the air. One might even say he soup-oses it was the soup. And one might also go so far as to say that is some delicious soup-text.

Allen, who is in the running for Outstanding Supporting Actor in a Drama Series, told EW that he "wasn't expecting [to be nominated]" it's "just an honor, man" to be up for the award. “There are a lot of actors I admire in that category," he continued, "just to be there is amazing, just came home now with my dog and letting it sink in.” He found out he is up for an Emmy and he got to hang out with his dog? Well, that sure sounds like a nice way to spend a Tuesday.

Speaking of nice stuff, the guy who played Theon on all eight seasons kept it positive when EW brought up the show’s polarizing final season. “I don’t really see the controversy,” he said. “It was a great rounding-up of familiar relationships at the core of it.”

That's not to say the cast wasn't affected by the backlash that followed the last season. When speaking at a Con of Thrones panel over the weekend, Allen's Game of Thrones costar and fellow nominee Nikolaj Coster-Waldeau talked about how the stars felt about the not-so-glowing reactions to the end of the series. According to HuffPo, the actor who portrayed Jaime Lannister opened up about the cast's WhatsApp group, noting that he saw "some people getting a little upset because some of the stuff is vicious." Sure, some cast members anticipated that viewers might not be entirely satisfied with the way it all panned out, but they probably didn't expect fans to literally petition to remake of Season 8.

"There was that kind of weird feeling of, ‘What the hell? We worked so hard.' I’m not asking anyone to feel sorry, by the way. That’s not what I’m saying. I’m just saying how it was to get through that whole thing.”

And that's the tea. And the soup.