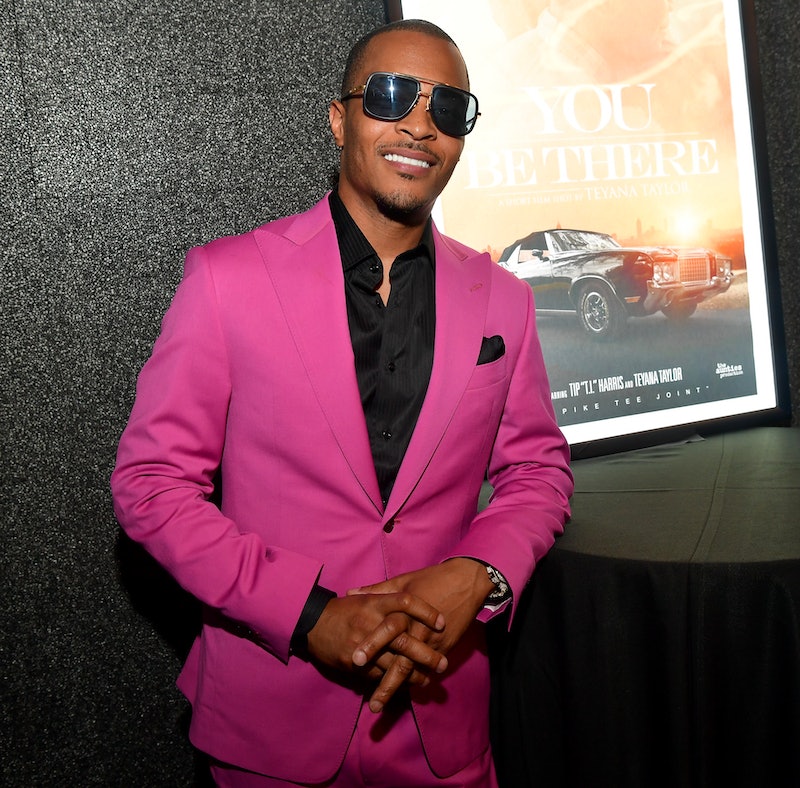 T.I. is making sure that his family knows exactly how much they mean to him right now. T.I. asked his daughters for "forgiveness" in an Instagram post on Monday, Jan. 27, after sharing a series of posts about the sudden death of Kobe Bryant and his 13-year-old daughter, Gianna. While the rapper — whose real name is Clifford Harris Jr. — didn't confirm that social media posts celebrating his loved ones were connected to the news of Bryant's death, he did share multiple posts revealing that the tragedy has greatly affected him.

"Heartbreakingly painful to hear this," he wrote on Instagram, alongside two photos of Bryant and Gianna. "Love hard on your children & family & live everyday like your last. Try to remind yourself to teat the people you love like you'll never see them again." In another post, T.I. added that "as a father I can't even imagine..." what the Bryants and the families of the other victims of the helicopter crash are going through right now. After sharing his grief over Bryant's death, the rapper also posted a series of tributes to his family, including his wife, his four sons, and his three daughters.

"I love you girls more than my vocabulary will allow me to express. You have ... blossomed into strong, brilliantly opinionated, independent young women," T.I. wrote on Instagram, alongside a slideshow of photos of his two oldest daughters, Deyjah and Zonnique. "Please forgive me for any and all imperfections that cause misunderstandings between us ... I just Can't [sic] let another second go by without letting you know ... you have ALL MY LOVE FOR ALL MY LIFE...&AFTER‼️"

Though he didn't specify any particular instances for which he was asking forgiveness, the rapper made headlines in November when he revealed on the Ladies Like Us podcast that he took his 18-year-old daughter, Deyjah, to the gynecologist every year starting on her 16th birthday to "check her hymen," and ensure that it remains "intact." His comments earned him a great deal of backlash from social media users, many of whom pointed out that such "virginity tests" were both scientifically inaccurate and potentially traumatizing for women. (They also inspired Assemblywoman Michaelle C. Solages to propose legislation to ban "virginity testing" in New York state.)

T.I. initially defended his comments during an appearance on Red Table Talk with his wife, Tiny, telling host Jada Pinkett-Smith that his intentions were simply to "protect" his daughter from "the slimy, grimy, chubby-fingered little boys" who are acting on their "primal" urges and want to "defile" her. However, he also admitted to "embellish[ing] and exaggerat[ing]" the story on the podcast, and revealed that he didn't actually accompany Deyjah to her doctor's visits.

Eventually, T.I. admitted that he was unaware of how sensitive a topic "virginity testing" is, though he said that he "absolutely" was more aware now. He also apologized to his daughter for sharing personal information about her and her body with the public, saying, "I am incredibly apologetic to her. Not to any of these other strangers or any of these weirdos, who kind of toss lies around for fun."

"Whatever [you're] mad at your loved one(s) about, I pray this moment shifted the energy ... and made you realize it's not that deep," T.I. wrote on Instagram on Jan. 27, and it seems like the rapper is taking that message to heart. While there's no way of knowing for sure whether or not T.I. was referencing — and apologizing for — his past comments about his daughter's virginity, it's clear that Bryant's death has inspired the rapper to reach out to his loved ones and make amends.