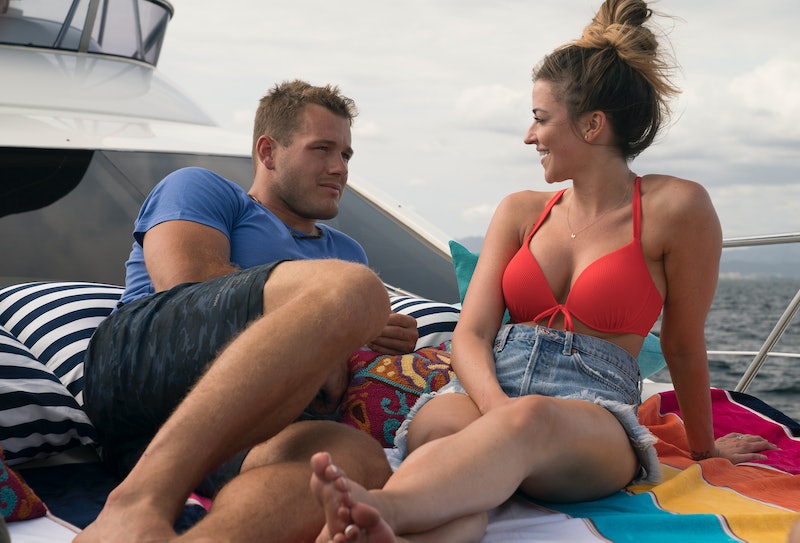 If you've been following along with Colton Underwood since his days on The Bachelorette, chances are you are very familiar with the Legend Of Colton and Tia. Tia Booth was in love with Colton, but even when they gave it a fair shot on Bachelor in Paradise, they still couldn't make it work. So when Colton teased that Tia would be on The Bachelor on Monday, it was pretty shocking to hear. But when the big moment came, it didn't play out like anyone would have guessed.

Colton shared the news that Tia would be joining him for an episode earlier in the day on Monday with a tweet letting fans know that she would be on their TVs tonight, and he wasn't kidding — even though he didn't show up in the capacity that fans might have expected. Even though they had a really intense, short-lived romance last year, that isn't what brought Tia to the show, because technically, she wasn't on the show at all. In fact, she was just on a promo for Isn't It Romantic, the movie starring Adam DeVine and Rebel Wilson, that involved a bit of a Bach parody.

So really, what Colton said was true — Tia was on everyone's TVs on Monday night, it just wasn't on The Bachelor.

It makes sense now that earlier in the evening, Tia had retweeted Colton's teaser to fans that they shouldn't fast forward through the commercials...because she was IN one. ABC really knows how to play with our Bachelor Nation loving hearts, doesn't it?

To be fair, bringing Tia all the way to Vietnam to have a sit down with Colton to ask him how he was handling the whole Bachelor experience would have been pretty hard to watch. Sure, Becca brought Tia onto her season of The Bachelorette so that the producers could reveal that one of her friends had briefly dated Colton before he was a contestant. But the whole thing didn't end there. Both Colton and Tia ended up on Bachelor In Paradise and it was heart wrenching to watch.

Tia really seemed to want to make it work with Colton, but ultimately, he didn't seem to be all that into it and they left Mexico separated. Tia has been through enough back and forth with this man — it's one thing to pay her to promo a movie during his season (at least she had some negotiating power), but it would have been cold hearted to have her give him some pep talk and then send him on a date with Kirpa or something.

Although they both seemed to have moved on and recovered from their BiP relationship. Colton is now dating a dozen women and on his way to whittling them down to the final three and Tia reportedly has a boyfriend. According to an E! report, the Arkansas native made it Instagram official back in November, when she posted a picture with a man named Cory Cooper. Judging by her Instagram posts, they're happily dating and going strong.

So it looks like both Tia and Colton survived their time during the Bachelor 2018 season together and are really moving on from each other finally — even if ABC insists on pretending that her appearance on Monday was going to be dramatic.