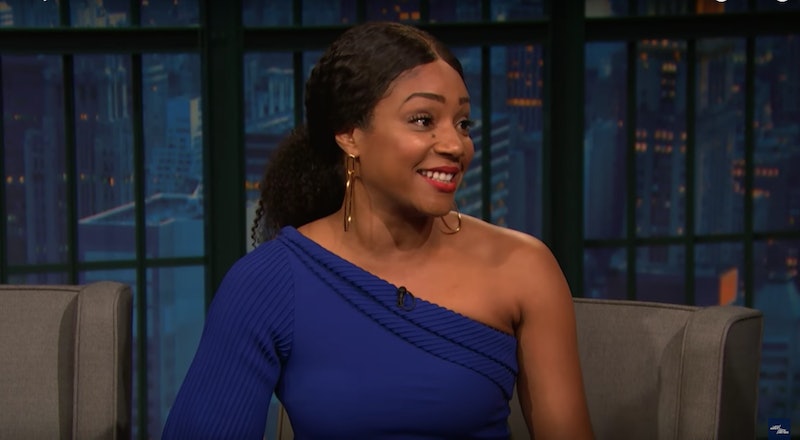 There's no mistaking the fact that Tiffany Haddish has had a major rise to stardom since her breakout performance in the 2017 comedy Girls Trip. Despite her amazing success, Tiffany Haddish almost starred in Get Out and her reason for turning the role down is hilarious and haunting at the same time. On Monday, April 9 episode of Late Night With Seth Meyers, the Haddish revealed that she turned down an opportunity to try out for Jordan Peele's box office smash because scary movies just aren't her thing. During her hilarious sit down, Haddish told Meyers:

Haddish says that Peele tried telling her that the film wasn't going to feature any demons, but explains that she still wasn't interested in taking part in the movie. She continued,

"That's a white man trying to take people's souls out their body and opening up brains. That sounds like some demon stuff to me.

Maintaining support for Peele, who is currently the producer of her new TBS television show The Last O.G., Haddish added, "I'm cool on that, I'll watch it... in the daytime, but I'm not going to be in it."

Considering the narrative and cast of characters featured in Get Out, it can be assumed that Peele was looking to cast Haddish in the role of Georgina, which was ultimately played by Betty Gabriel, as indicated by CinemaBlend.

In addition to Haddish and Peele's recent small screen collaboration, the pair also worked together on the 2016 film Keanu. Peele directed, wrote and starred while Haddish to on the role of Trina "Hi-C" Parker.

Amidst her hilarious interview on Late Night, the 38-year-old comedian also talked about her time at the 2018 Oscars, and detailed how she hopped over the velvet ropes at the March 4th red carpet event to talk to Meryl Streep. She explained, "I just jumped, and then I told Meryl that I wanted her to be my mama one day," she said. Haddish later shared her wish to have Streep appear in Girls Trip 2., telling Meyers: "I think it would be so cool if we find out that Dina has a white mom."

She went on the reveal that her Girls Trip co-stars, Regina Hall, Jada Pinkett-Smith, and Queen Latifah wanted to know how that would be possible. Haddish was able to quickly break it all down in hilarious manner, explaining:

"I was like, 'Well, she could've married my dad. See, maybe my real mama passed and then she married my dad. And then my dad passed, but she like turnt up like Dina. And then you find out why Dina the way she is because she get it from her stepmama, who happens to be Meryl Streep!'"

Haddish contends that the moment could turn into an Academy Award winning performance for Streep. She says, "if you see Meryl Streep turnt up like me, you'll be like 'she can do anything!'"

Get Out was one of the biggest successes of 2017 with Time Magazine naming it one of the top 10 films of the year. The film was also a huge box office success, grossing $255 million worldwide on a $4.5 million budget. It ultimately became one of the most profitable films of 2017, according to The Wrap. Jordan Peele won the Oscar for Best Original Screenplay at the 2018 Oscars, making him the first African-American to ever do so.

Like most things that she says, Tiffany Haddish's reason turning down Get Out is as honest and hilarious as it gets.