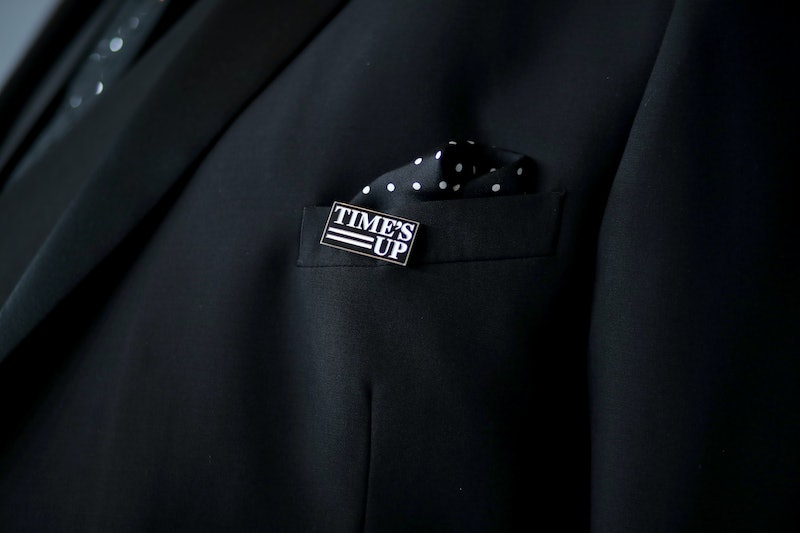 Time's Up's latest initiative could change the creative landscape of Hollywood for the better in a major way. On Friday, Dec. 14, Time's Up Entertainment announced a new mentorship program that will focus on increasing the presence of people of color, as well as those from other underrepresented groups, at the executive and production levels in the entertainment industry. The program is called "Who's in the Room," and it's being funded by a $5,000 grant from CBS, according to the Los Angeles Times. The first group will consist of 10 mentees who will be in the program for nine months.

In a press release, Executive Director of Time's Up Entertainment Nithya Raman explained, "The fact is that young people are dropping out of the industry because they are not being provided the support to succeed — this program provides them that targeted support. We thank CBS for funding this important program and feel extraordinarily grateful to have such a committed and talented group of industry leaders lending their time and talent to shape this program."

The program will focus on people in entry level positions and assistants who have the potential to transition into executive roles. While this is far from the first mentorship program in Hollywood, "Who's in the Room" aims to be a hands on experience that will include weekly check-ins and monthly teaching events on subjects ranging from industry topics to financial management. Additionally, mentees will each have access to a $10,000 fund designed to help them with business projects, basic needs, and emergencies.

Having such a comprehensive mentorship program in place could lead to a more inclusive version of Hollywood, where the people in charge of greenlighting films and TV series will come from a variety of backgrounds with unique voices. "There is nothing short of an urgent need at the moment to have the people who buy, create and promote entertainment content be more representative of the people we serve,” said Jenno Topping, the President of Film and Television at Chernin, in Time's Up's release.

By committing to making sure more people have the tools necessary to succeed within the industry, Time's Up Entertainment is also betting on a trickle down effect that will lead to projects that speak to people from all walks of life. The more inclusive the entertainment industry is at an executive level, the more creative the projects coming out of Hollywood have the potential to be in the long run.

"Who's in the Room" is just one more example of how much good Time's Up has done since it's launch on Jan. 1. The initiative has also launched the Time's Up Legal Defense Fund — which is helping women, people of color, members of the LGBTQ+ community, and those from disadvantaged economic backgrounds fight against sexual harassment and discrimination in the work place — and fundamentally changed the conversation about equality and representation in Hollywood.

Throughout 2018, the passionate group of activists and entertainers who came together to form Time's Up have made sure their initiative hasn't lot any momentum, and with the announcement of this new mentorship program, it seems clear that they're going to continue to fight for industry change in 2019, as well.