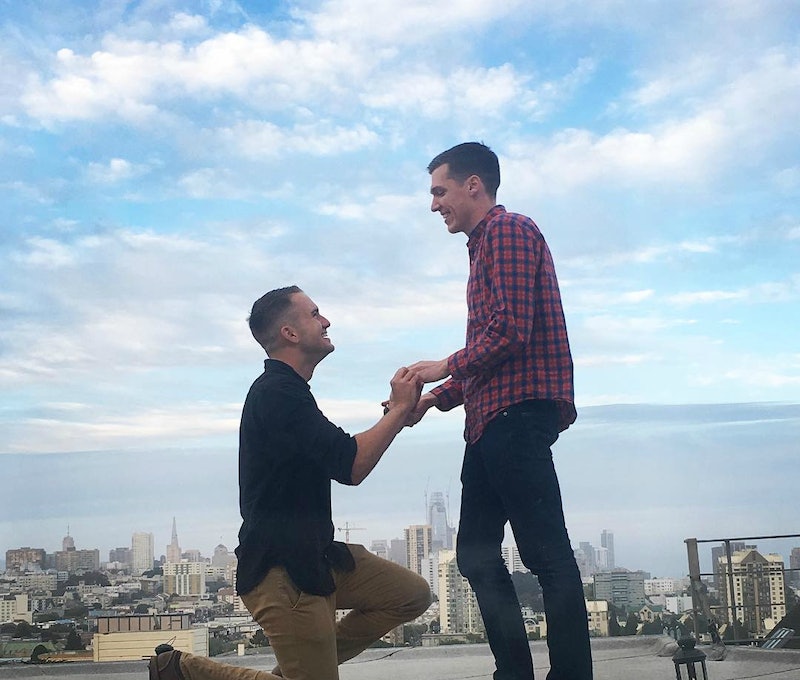 On May 5, 2017, Logan Peters got down one knee and asked the love of his life, Ryan Holly, to marry him. Two months later, Tinder honored their love by announcing that they were the winners of a Tinder's Pride Month dream wedding contest, meaning they'd get $100,000 toward their special day. To enter, they shared how the dating app played a part in their love story with the hashtag #TinderSuccessStory.

Ryan and Logan's story started two and a half years ago in a Denver diner. Ryan had come out nine months prior and, after using Tinder for a few months, found that he had matched with Logan while sitting in a booth there. Ryan was smitten. "I remember Logan’s profile had multiple cute pictures of him on a beach, and he included a little message about how he recently moved to Denver from California. I remember being so nervous and excited to send him a message," Ryan tells Bustle.

While Logan had been on Tinder for about a year, it was only after moving to Denver that he permanently set his interest to "men", and credits the dating app with helping him come out. About a month later he met Ryan. "From the very beginning, Ryan made me laugh and he continues to every day," Logan tells Bustle. "His quick wit and sarcasm was hard to resist in our initial conversations on Tinder. Ryan is caring, thoughtful, and intelligent, and those qualities really shined through in our first conversations."

After a few days of easy flowing conversation, Ryan asked Logan when he had come out to which Logan responded, "I'm not." This scared Ryan but he decided to take a chance.

Their first date was spent at a Brewery where they talked for hours. On their second date Logan told Ryan he planned to come out to his parents the next day because Ryan had given him the courage to do so. A week later, they were in a relationship, and in a month, living together.

This couple's commitment to each other is obvious but one great example comes a year before they got engaged: Logan asked Ryan's parents for their permission to marry their son that long before popping the question.

"Our dream wedding will be up in the mountains of Colorado, hopefully in one of its scenic ski towns."

Currently living right outside of San Francisco in Berkeley, California, the couple is looking to move back to Denver. "We met in Colorado, and we really loved spending time with each other up in the mountains while we were living there," the couple says, "So, our dream wedding will be up in the mountains of Colorado, hopefully in one of its scenic ski towns. We don’t have a preference with a specific location, as long as it has beautiful views and lots of trees. Most importantly, our dream wedding will be a night spent celebrating our love with our close family and friends."

Basically, no matter how anti-romance you are, this couple has the power to change your mind. They are the kind of couple where, even through a simple picture, their love for each other radiates.

Fighting For The LGBTQ Community

For the couple, the motivation behind entering the contest was twofold. "We would get to have the wedding of our dreams, but we would also receive a rare opportunity to help make LGBTQ love stories more visible to the general public," the couple says. "It feels great to share our story, and to show the public that love is love. We are so appreciative that Tinder took a stand on marriage equality, and chose us to help them share their message!"

It would be easy for Ryan and Logan to be focused on the amazing wedding to come, so the fact that they are so passionate about using this as an opportunity to support the LGBTQ community is really amazing. "We wanted to emphasize how much it means to us to have a platform to share our story and help those struggling within the LGBTQ community," the couple says. "If we can help just one LGBTQ person struggling with self-acceptance see that there is a light at the end of the tunnel, then we will be overjoyed."

"We won’t stop fighting until we are all are free to love who we want to love."

Ryan and Logan are so grateful for the immense amount of work that has been done to create a safer world for LGBTQ individuals. "In the short time that Logan and I have been a part of the community, we’ve seen such a rapid, positive change in public opinion and in LGBTQ rights, especially with marriage equality," Ryan says. "These changes were made possible by those who challenged our institutions and fought to change public opinion over the past few decades. We are so appreciative for the work these people put in to help bring LGBTQ rights into the public eye, and to help people like us live our lives comfortably."

But they know the community has a long way to go before full acceptance is achieved. "Around the world, LGBTQ individuals are still being targeted by atrocious hate crimes," the couple says. "We hope to see a worldwide movement to both help end these atrocities, and to expand LGBTQ rights in countries around the world. We won’t stop fighting until we are all are free to love who we want to love."

It's amazing to see such a wonderful couple be given this platform and opportunity to celebrate their love. With a $100,000 budget, I can't wait to see what Ryan and Logan come up with for their fairytale wedding. Luckily the wait won't be too long since they hope to get married within a year. Congrats Ryan and Logan!