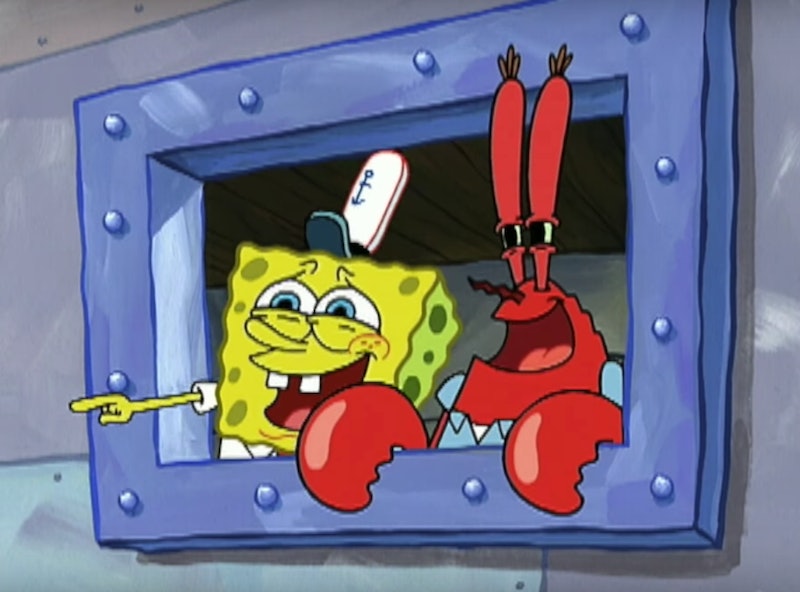 “Krabs is really 75 years old?” you ask before sinking your teeth into a perfectly prepared Krabby Patty. “He doesn't look a day over 40. Where’s the proof?” Don’t get your squarepants in a knot, there's plenty of evidence. GMA tweeted a screengrab of Mr. Krabs’ license to back up the birthday message. The I.D. doesn’t include his first name or his middle name (it’s Mr. Eugene Harold, if you’re crabby), but his date of birth is emblazoned on the card. The crustacean who runs the Krusty Krab was indeed born in 1942, and was 56 years young when SpongeBob SquarePants debuted in 1999.

Mr. Krabs’ birthdate is revealed in a Season 1 episode titled “Sleepy Time” when the series' titular character gets ahold of his boss's boating license. Sure, SpongeBob does look at the I.D. while he’s spending some time in one of Mr. Krabs’ dreams, a detail that might seem like enough of a reason to question whether or not that’s his actual date of birth. However, it's been widely accepted as his birthday; Mr. Krabs’ visions of going deep sea fishing for dollar bills may not be rooted in reality, but the date of birth on the license shall be regarded as truth until proven otherwise.

But wait, there is another delicious Krabby Patty of a factoid to chew on: Today is Plankton’s birthday, too. As viewers learned in Season 5 episode “Friend or Foe,” best buddies-turned-sworn enemies Mr. Krabs and Plankton share a birthdate. And both burger makers are 75. It’s a tale that one might call Shakespearean: Two sea creatures are born on the same day, become the closest of pals, pursue the same dream, let envy tear them apart, and one vows to destroy the other at any cost.

Exciting stuff, eh? Granted, Mr. Krabs and Plankton turning 75 isn’t on the level of the “Squidward is an octopus, not a squid” revelation, but it’s still quite a piece of information. And speaking of Mr. Tentacles, Squidward’s age seems to be one of Bikini Bottom’s greatest mysteries, right up there with the lingering question about Pearl’s mom. As far as Mr. Tentacles’ date of birth goes, there are lots of guesses floating around in the choppy waters of the internet. He might’ve been born on Oct. 9, 1972. Or on April 15, 1977. Or on Nov. 29, 1966. Or Dec. 13, 1966. Huh. Looks like Squidward Q. Tentacles is a Gen Xer. Who knew he was that much younger than Mr. Krabs and Plankton?

Yes, Mr. Krabs and Plankton, two characters introduced to '90s kids nearly two decades ago, are 75 now. Wow, when did that happen? Has it really been almost 19 years since that painting of a pirate belted out the SpongeBob Squarepants theme on TV for the first time? Where have the years gone? Did we get old? Is that what's happening?