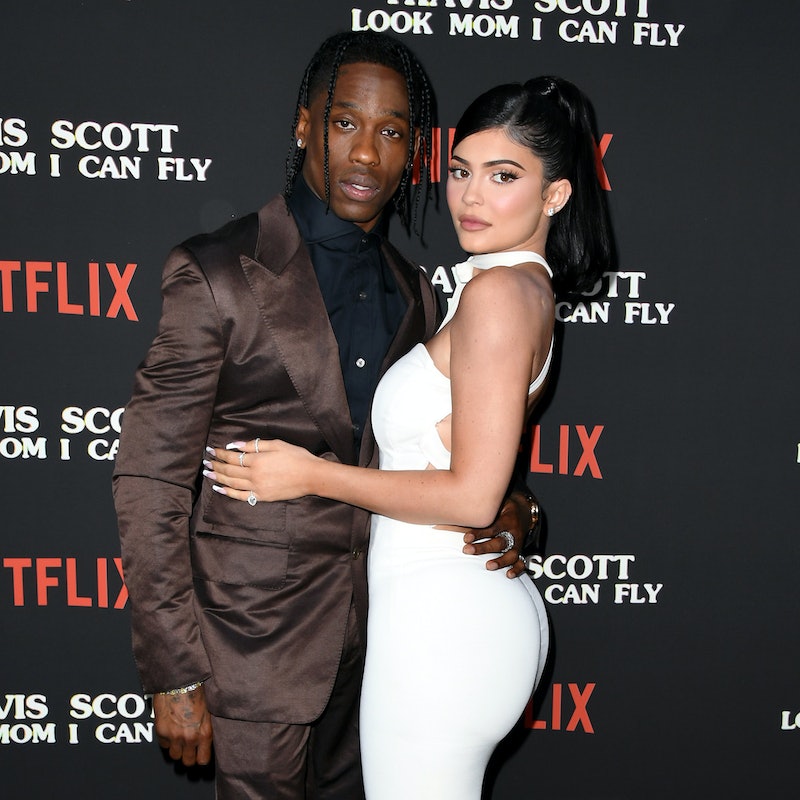 In the three months since news of their breakup first broke, neither one of Stormi Webster's parents have shared much about the split publicly. However, in a new interview with XXL Magazine, Travis Scott seemed to hint at why he and Kylie Jenner broke up while speaking about their current relationship status and their commitment to parenting their daughter. The notoriously private rapper didn't share much about his breakup with Jenner, though he did note that he will always have fond feelings for the Kylie Cosmetics mogul.

Revealing that he and Jenner "came up with the name Stormi together," Scott continued, "I love [my daughter's] mommy and I always will." Despite how much the pair care for each other and their 1-year-old daughter, it seems like the public scrutiny on their relationship got to be too much for them to handle: "The hard part about relationships is just trying to be in one without a million outside voices interfering," Scott said.

Public attention has been a major part of Scott and Jenner's relationship since the pair first began dating in April 2017 after meeting at Coachella. "We would just go to these random cities. We got to not be who we really were," Jenner told GQ in July 2018 about the early days of their relationship, adding that staying out of the spotlight in the beginning was a big help. "If we were in L.A., I feel like it would've been way different. ... We weren't going out as 'Kylie and Trav.' We would just be in Cleveland, walking the street for hours. We would go on walks, and no one would bother us."

Later in the interview, Jenner also revealed that she did her best to keep their relationship private, since Scott wasn't used to the public scrutiny in the same way that she was. "I know he doesn't like the attention. That's why we just go the extra mile to keep our relationship super private, or like, if he has events or something, I won't come," she said at the time. "Because I want him to do his own thing. I want him to be him. I don't want it to be Kylie and Trav. If people don't ever see us together, that's okay with me, because we just do our thing."

Despite becoming more comfortable with sharing their relationship with the public — Scott accompanied Jenner to two Met Galas, and she often joined him on his Astroworld Tour — TMZ reported in early October that the pair were "taking a break." A few days after the news broke, Scott refuted reports that he and Jenner had broken up due to infidelity, writing on his Instagram Story, that "it’s really affecting when u see false things said about u once again these false stories about me cheating are just simply not true."

He continued, "Focusing on life, music, family at this moment is what's real." Around the same time, Jenner herself clarified on Twitter that the pair's breakup was completely amicable. "Travis and I are on great terms and our main focus right now is Stormi," she wrote. "Our friendship and our daughter is priority."

Despite their breakup, it's clear that the pair are still committed to co-parenting Stormi and making sure that she is always their main focus. "I’ve been spending time with my family and with my daughter, Stormi," Scott said in his XXL Magazine cover story. "Stormi is one of the best human beings I know. She’s like my best friend. She makes life a little bit easier. She just inspires me and she surprises me every day with how she’s thinking."

No matter what the reason is behind Jenner and Scott's breakup, it's clear that the pair will always have a great deal of love for one another and their baby daughter.

More like this
Kylie Jenner Clarified How To Pronounce Her Son's New Name
By Jake Viswanath
Kim Kardashian & Kylie Jenner Squabble Over Skims On Instagram
By Alyssa Lapid
Keke Palmer Shares The Sex Of Her & Darius Jackson's Baby
By Jake Viswanath
Hilary Duff's Husband Matthew Koma Has Her Name Tattooed On His Butt
By Jake Viswanath and Stephanie Downs
Get Even More From Bustle — Sign Up For The Newsletter
From hair trends to relationship advice, our daily newsletter has everything you need to sound like a person who’s on TikTok, even if you aren’t.