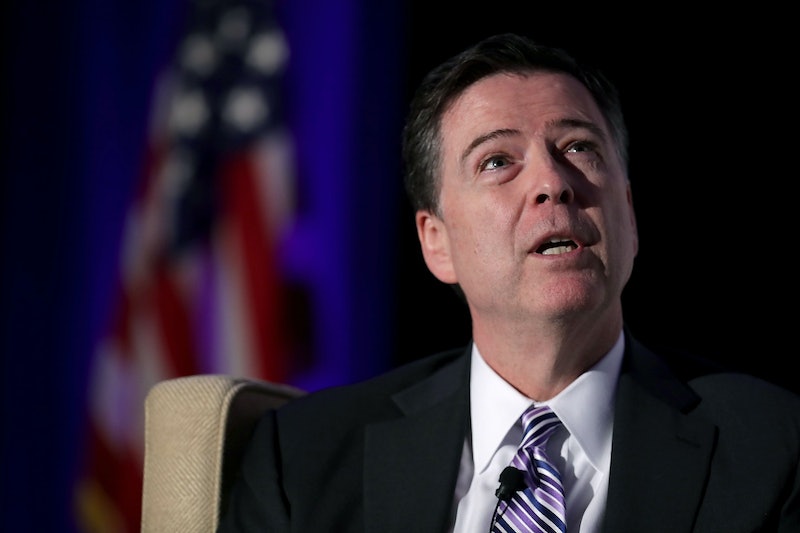 Following reports Tuesday evening from The New York Times that Donald Trump asked then-FBI Director James Comey to end investigations into Michael Flynn, another problematic alleged request from the president has press freedom advocates and journalists particularly alarmed. The Times also reported that, according to a memo the former FBI director wrote, Trump told Comey to jail journalists who published leaked information. He allegedly said this in a private exchange after a meeting with several other senior White House officials shortly after Flynn, the national security adviser, resigned.

It's no secret that President Trump doesn't hold matters of press freedom in high regard. In his short political career, he's gone on record about his pipe-dream to "change libel laws" to punish journalists; he's made the dubious concept of "alternative facts" ubiquitous in cultural conversations; and he has employed nearly every playground epithet one could imagine (typically during a late-night/early morning tweet-storm) in an attempt to discredit most mainstream and legacy publications.

Media folks have long predicted that he'd come to blows with the Fourth Estate during his presidency. However, the desire to silence reporting, his obsession with demonizing "leakers," and his aggressive antipathy toward transparency are a startling red flag.

The comments attributed to President Trump cross a dangerous line. But no president gets to jail journalists. Reporters are protected by judges and juries, by a congress that relies on them to stay informed, and by a Justice Department that for decades has honored the role of a free press by spurning prosecutions of journalists for publishing leaks of classified information.

Further, Brown said the comments should serve as a reminder of the important role reporters (as well as the public servants who reach out to them) play in keeping the public informed and government institutions transparent.

Comments such as these, emerging in the way they did, only remind us that every day public servants are reaching out to reporters to ensure the public is aware of the risks today to rule of law in this country. The president's remarks should not intimidate the press but inspire it.

Trump's comments also speak to a larger, global trend of not just silencing, but punishing the press. According the Committee to Protect Journalists, a global press freedom advocacy group, prison census data indicate there were as many as 259 journalists jailed worldwide as of early December.

CPJ adds in an explanation of their research methods that the people were frequently jailed by "repressive and authoritarian regimes" who refer to the journalists as "terrorists," "subversives," "propagandist[s]" or "separatist[s]" to justify them being imprisoned for doing their jobs.