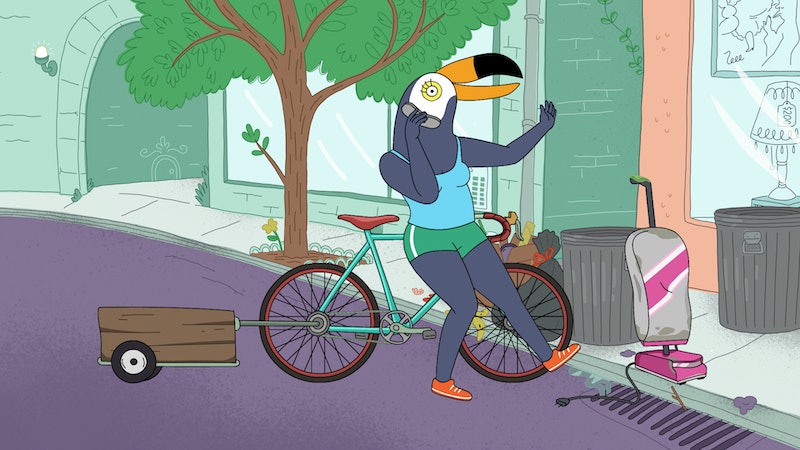 At first glance, Tuca on Netflix's new Tuca & Bertie comedy series is the life of the party. She's reminiscent of characters we've seen before — the "crazy friend" who's often flanking a rom-com lead and acting as a catalyst for outrageous events is a familiar trope. But luckily, Tuca & Bertie doesn't reduce Tuca to that single dimension. Instead, it pushes viewers to look past that convivial exterior. Tuca's alcoholism on Tuca & Bertie is one issue the series dives deep into and it helps viewers better understand her character. She mentions early on that she's sober, and Episode 5 in particular shows how, like addiction often does, her relationship with alcohol runs in the family. And her childhood trauma only adds to it.

In this installment of the 10-episode series, Tuca (Tiffany Haddish) and her best friend's boyfriend Speckles (Steven Yeun) head to visit Tuca's aunt for her birthday. Tuca seems excited about the trip, and for a while after they get there, everything is going smoothly. But it soon becomes clear that Aunt Tallulah is the picture of what Tuca does not want to become, and part of the reason she is the way she is.

Tallulah is a many times-divorced woman with a huge house, a legendary fashion career, and a love for drinking. They playfully rib each other — "I can't wait for you to do something I can brag about," Tallulah tells Tuca — but Tuca swears it's all in good fun. She won't tell her aunt that she's sober, telling Speckle she doesn't want to "bring the festivities down with a bunch of sobriety talk," so for the entire day, Tuca is funneled drinks she sneakily disposes of. The more she hides, the more clear it becomes how toxic this family relationship is for her.

By the end of the visit, an ever-drunker Tallulah becomes more and more biting. Under the guise of banter, she suggests that Tuca only came to visit her so she could borrow money to "keep the lights on in that dingy apartment," and tears down fond memories Tuca has of her deceased mother, saying disdainfully that Tuca is "just like her." When Tuca says to stop speaking about her mother that way, things reach a boiling point.

"You can say whatever you want about me, but that woman put nothing but positivity and love in this world for the brief time that she was in it," Tuca says. This line in itself can help explain why Tuca is so hell-bent on having a good time and brushing off conflict, even when her aunt is targeting her with insults. Being "just like her mother" isn't a bad thing to Tuca — if her mother was a ray of positivity and light, she wants to be one too, even if that sometimes means taking it too far.

If Tuca has been subjected to these insults from Tallulah for her entire life, especially after her mother died, it makes sense that she's developed a severe defense mechanism in all aspects of her life. While she was still drinking, it was also probably easier to let things roll off her back. Refraining from getting upset about things — her mother's death, her toxic aunt, being on her own for most of her life — is way easier than dealing with them. It's easier to be the "fun friend" who's bringing lots of joy to people and never bringing the mood down.

That attitude is only exacerbated by the fact that Tallulah tells Tuca everyone is going to leave her in the end, and that she can't depend on anyone. That hits hard, especially because Tuca has just moved out of her shared apartment with Bertie so Speckle could move in. Part of Tuca's carefree personality can be attributed to that fear of abandonment — how can she end up alone if she gives everyone such a good time?

It's clear Tallulah is projecting — she is the one who's all alone, with only her butler for company, especially since she lobs insults at those who do come to visit. She's a cautionary tale for Tuca; Tuca doesn't want to end up a lonely alcoholic with no friends, and she's already made steps toward remedying that situation — she's sober and sticks to that commitment even when it's not fun. Tuca has more demons to grapple with, but she's making progress little by little, and that's way more than her Auntie Tallulah can say.