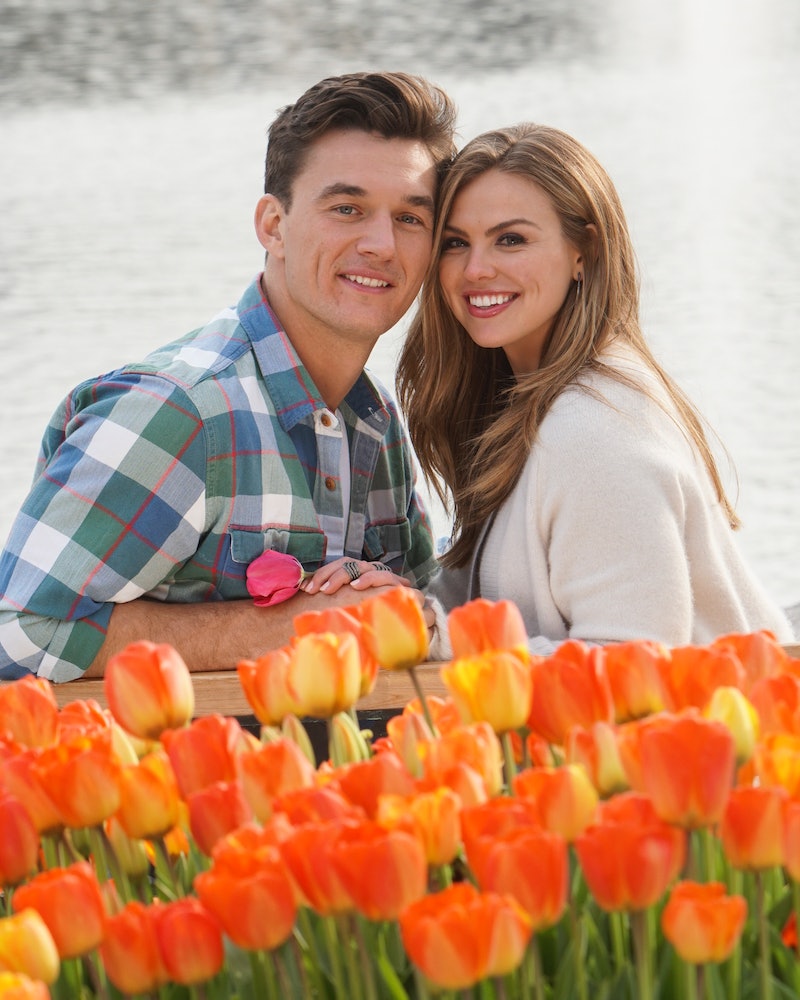 When contestants sign up to take part in The Bachelorette, they agree to show just about every moment of their romance with the world. However, Tyler C. revealed there was a NSFW Bachelorette moment that was cut from the final show. And the Bachelorette runner up couldn't be happier that America didn't have to see this particularly cringe-worthy moment between himself and Hannah Brown.

During a recent appearance on The Ringer's Bachelor Party podcast, Tyler confessed that things got a lot more intense between himself and Hannah than the ABC show revealed to viewers. Recalling their trip to Scotland in the fifth episode, Tyler said, "Things got pretty heavy between me and Hannah. We were in a castle." Despite the pair's steamy hookup, he revealed that he was able to keep things from getting too graphic for the audience at home. "I was able to keep everything under control there. I was proud of myself."

Unfortunately, the next time that Tyler and Hannah had an intimate moment together, he wasn't as lucky. Recalling the group's trip to Latvia, Tyler said, "I had those tight, way too small pants on [and Hannah and I] were making out and they were like, 'Alright guys we have to go, we have to go.' I was like 'No!'" Still, Tyler wasn't able to calm himself down after his private moment with Hannah, resulting in him revealing more than he intended to the Bachelorette cameras. "I was like, 'Well, now I have a boner and all of America is going to see it,'" he recalled.

While Hannah offered to try and help him hide his NSFW problem, Tyler admitted that he just decided to not to hide his lower half from the cameras. "I was like, ‘No, I’m just going to show it off,'" but he couldn't help but admit that he was relieved that the scene ultimately got cut from the final episode.

Tyler is far from the first member of Bachelor Nation to worry about having an erection on camera; in fact, the Bachelor Party hosts even told him that former Bachelor Ben Higgins once confessed to getting a little too excited during his own season. In 2017, Nick Viall — who appeared on four different shows within in the Bachelor franchise — confessed to a similar situation during an appearance on Watch What Happens Live, when asked whether he had ever "gotten a boner during a group date, and had to hide it from the other girls," as host Andy Cohen put it. "Definitely, yeah," Viall responded.

Of course, the boys are far from the only ones who have talked about things getting steamy during their time on the Bachelor franchises recently. Hannah famously confessed to hooking up with Peter Weber on their Fantasy Suite date in Greece during an argument with contestant Luke P. "I have had sex. And honestly, Jesus still loves me. From obviously how you feel, me f–king in a windmill, you probably wanna leave," she told the controversial contestant in front of the cameras. "I f*cked in a windmill. And guess what? We did it a second time!"

The Bachelor franchise is all about finding love, and sex is an important part of any solid relationship, so it's no surprise that so many members of Bachelor Nation have opened up about physical intimacy on the show — and all of the the good, bad, and awkward moments that come with it.

More like this
Gabby & Rachel Reveal How That 'Bachelorette' Rose Ceremony Twist Happened
By Grace Wehniainen
It’s Official: 'The Bachelorette' Is No Longer A Fairy Tale
By Samantha Allen
Logan Might Change His Mind About Dating Rachel On 'The Bachelorette'
By Brad Witter
Former 'Bachelor' Producer Elan Gale Knows The Secret To Your Favorite Shows
By Samantha Rollins
Get Even More From Bustle — Sign Up For The Newsletter