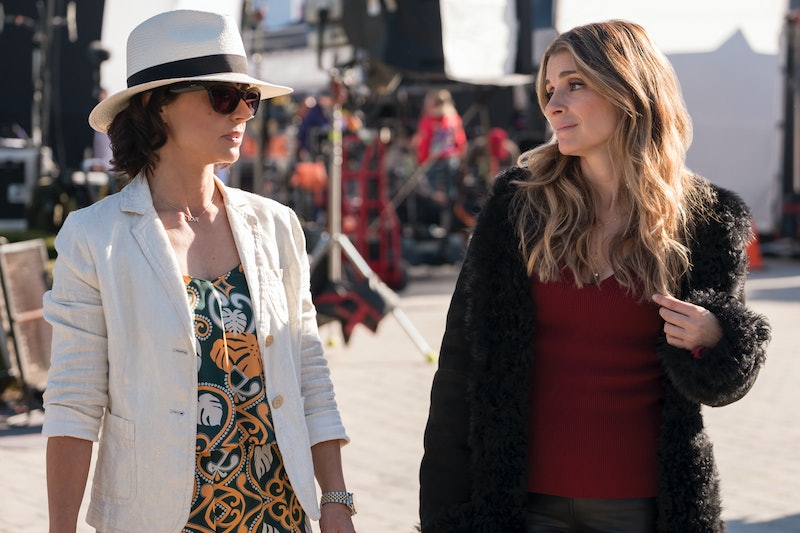 Spoilers for UnREAL Season 4 ahead. It's been five whole years since UnREAL premiered and gave viewers insight into the real-life seedy underbelly of reality television. With each season the stakes have gotten higher, the stories more dramatic, and the outcomes darker. But the fourth and final season of UnREAL, which was was recently dropped in its entirety on Hulu, might be the bleakest season yet. It's also the most complicated, as Season 4 of UnREAL poses substantial questions about feminism and female friendship. For example, how easy is it to throw away one’s humanity and feminist principles in order to surf the raging seas of the patriarchy and stay afloat? Quinn and Rachel, once nearly the same being, now find themselves diametrically opposed in their answers.

As a series, UnREAL starts as a story about a woman hating her job. Rachel is torn inside about producing and manipulating other people on a reality show steeped in patriarchal values, but she’s really, really good at it. In an interview with Bustle, UnREAL Executive Producer Stacy Rukeyser says, “that internal conflict has always been at the crux of who [Rachel] is, that she derives great power from what she does at work and her ability to manipulate these women or contestants in general, but she also hates herself for it. This season was her, as she says, [being] 'tired of hearing herself talk.'"

And she really went for it. Throughout the series, Rachel could be manipulative and callous, but Season 4 Rachel takes her cruelty and coercion to another level, which, at its height, means arranging the attempted rape of a contestant on Everlasting All-Stars and forcing a victim of sexual assault to face her assaulter, which is deplorable. It’s certainly not something a woman who called herself a feminist would make happen. How did she get there?

Rachel transforms herself because feminism, in her eyes, has failed her. Before Season 4, three people — her ex, Jeremy, the show’s psychiatrist, Dr. Simon, and her mother — have insinuated or flat-out said that Rachel should and deserves to be alone. That scared her, because, well, she's human. Somehow, the idea got into her head that to find a partner (which meant in her case, a man), she had to just give into the patriarchy, the same system she was so conflicted about holding up through her work on Everlasting in previous seasons.

With Rachel, there is no in between, ever, which is dangerous for her and those around her. To find herself a partner, she eschews the baggy tees and flak jackets of her past in favor of serious highlights, fake eyelashes, and a giggling, tittering personality she puts on in front of any man (contestants or producer) that will listen. But she misses the point. Wearing makeup and wanting a partner to spend your life with doesn't have to be anti-feminist. One can do both, or nothing, at all. Rachel doesn't get that, smart as she is.

It’s clear that Rachel has problems, but, argues Rukeyser, she falls off the morality cliff here because she’s changed her look, but not what’s underneath.

Rachel’s new outlook is also damaging to the women around her, including Quinn, who is partly the reason Rachel is the way she is to begin with. “This season was always conceived as a Frankenstein story, that Rachel is becoming a monster and that Quinn has to look and see that she’s in great part responsible for the monster that she’s created,” says Rukeyser. Quinn is the only person who has given Rachel the validation she's sought all of her life, but she's also the person who taught Rachel how to manipulate and damage people, especially the women coming on Everlasting. It's always a tug of war between the two — Quinn gives Rachel some slack, and then she reels her in, over and over again, throughout the series.

But things are different this time. When Quinn finds out she’s pregnant, Rachel rejects her and actually tries to sabotage Quinn’s new almost-mommy life. Is Rachel jealous of the baby? Does she not want to be left alone? Does she think Quinn is selling out? It’s not entirely clear. But for Quinn, who has always been Rachel’s champion — no matter what — it’s a sobering moment to see how much Rachel has changed and how far she’s willing to go to hit ratings gold.

“I firmly believe that she never intended for things to go that far… Her unresolved sexual trauma is playing unconsciously in her decision to bring back Maya and Roger,” she says. Rachel is still a feminist, Rukeyser explains, but she has yet to deal with the severe traumas in her life that have gotten her to this point, and so she has to find validation in her work — at all costs. “If you look at her life... she had a crazy mom, she had sexual trauma in her past that was really never dealt with, that they were never even talked about so it was no way to process it, and then she finds herself in this job where she’s doing things that she feels incredibly guilty about — that’s not good for anybody’s mental health,” she says.

What Rachel fails to see in Season 4 is that it's not the patriarchy or her feminism that are keeping her from validating and healthy relationships. It's all of her unresolved issues and her inability to see past herself that does that, way more than The Man™ ever did.

Quinn is no angel here either, obviously, as she’s arranged plenty of questionable antics in Everlasting’s past. But Rachel actually producing a rape is what crosses the line for Quinn. Yet, instead of getting Rachel help or removing her from the show, Quinn rescues Rachel, blaming producer Tommy for the almost-rape and all of the other behind-the-scenes machinations. Then, she has Rachel burn the set down so none of them have to go back to that place, both literally and figuratively.

“It’s certainly complicated — it’s not roses and daisies at the end. Quinn throws Tommy under the bus, and frankly, Rachel lets her. She doesn’t speak up… and we had a lot of discussion about that final scene at the end and whether or not Rachel should be saying something about Tommy, either that she’s worried about him or that she’s done something to get him,” Rukeyser says. “Ultimately, we decided to cut all that because it was about this female friendship and what we considered to be the ‘love story’ of the series, and I believe that’s true.”

For Rukeyser, Quinn and Rachel represent the “primal” side of female friendships, no matter how problematic their relationship is. “I’d like to think that it celebrates female friendship and the strength of friendship even when there is conflict, even when people lose their minds for a while and do terrible things. That bond is so strong that it can see you through that and help bring you through the other side,” she says.

In the end, Quinn scooping Rachel from oblivion seems to work, at least in part. Rachel dyes her hair back to brown and busts out her feminist t-shirt collection again, but it won't necessarily make Rachel whole again. Running back to friendship and her own closet is a good start, as is destroying Everlasting. But Rachel has a lot more work to do when it comes to slaying her inner demons and figuring out what feminism means to her.