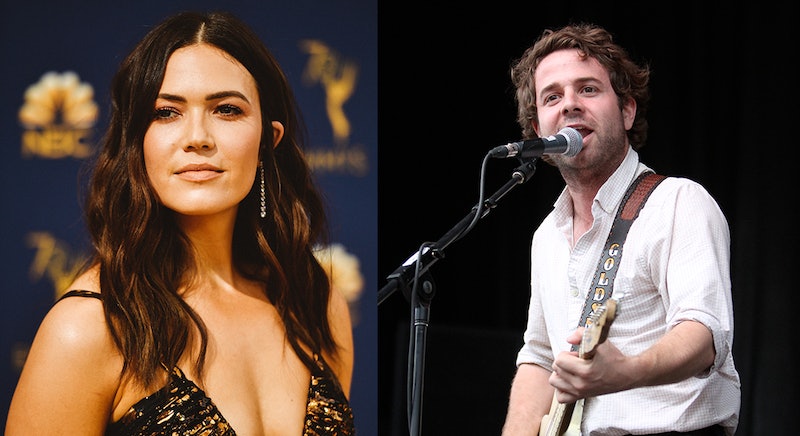 She wore a pink dress for the ceremony, a black dress for the reception, and a microphone in her hand when it was time to get on stage with her husband for a duet. Mandy Moore and Taylor Goldsmith sang at their wedding this past weekend, and yes, there is a glorious video of the final few seconds of their performance. After the This Is Us star and the Dawes frontman tied the knot in the backyard of their Pasadena home on Sunday, Nov. 18, the wedding guests headed to an event space to celebrate the newlyweds. And at the reception, the musically inclined couple treated their guests to a mini concert.

Los Angeles Times writer and author of Bachelor Nation: Inside the World of America’s Favorite Guilty Pleasure Amy Kaufman shared a snippet of Moore and Goldsmith’s wedding reception performance on Instagram. The clip begins just as Moore and Goldsmith are finishing their rendition of “The Things I Might Have Been,” Kitty Wells's country classic that's been covered by Willie Nelson, Roy Clark, and Kris Kristofferson and Rita Coolidge. The clip ends right after the song ends, but not before the bride plants a smooch on the groom. Let this video of these two lovebirds singing swaddle your heart like a chenille blanket on a brisk November afternoon.

Moore and Goldsmith did not announce their wedding date to the world before they walked down the aisle, so when E! News reported they got hitched on Sunday, it came as a bit of a surprise to all who were not present. A source revealed to E! there was "an intimate backyard wedding at Mandy's home that started just after sundown on Sunday evening." The insider also told E! that the attendees list was made up of a “small group of family and friends that looked to be about 50 people." The guest list included Minka Kelly, Milo Ventimiglia, Chrissy Metz, Sterling K. Brown, and Wilmer Valderrama.

Their love story began where so many great love stories of our time begin: the internet. Moore and Goldsmith started dating in 2015 after connecting via social media. As Moore recently told People,

“I took a picture of their album and posted it on Instagram. Somehow, Taylor saw it and sent a note to me. We started emailing back and forth, then we went on a date and the rest is history. Thanks Instagram, for helping me meet my fiancé!”

Goldsmith proposed in September 2017. A few months later, Moore told E! News that she planned to put together a “simple” and “intimate” wedding sooner rather than later. She said,

"It'll happen sooner rather than later. I'm not in any rush, but also I'm like, ‘I wanna do it.’ I don't need to wait, I don't need to have a long engagement. I'm not planning some giant, lavish affair. So, I might as well just do it."

A year after she told E! that she "might as well just do it," Moore just did it.