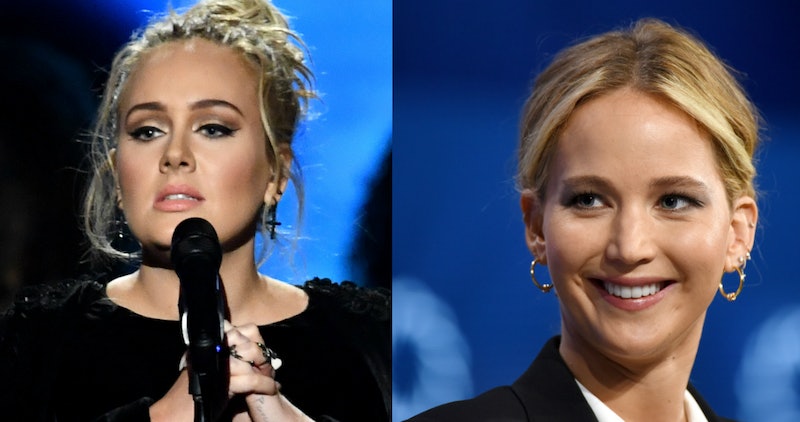 You might think that you had a fun Friday night, but your evening had nothing on the patrons of one lucky gay bar. Adele and Jennifer Lawrence enjoyed a girls' night out at Pieces Bar in New York on Friday, officially filling everyone who missed out on the party with undeniable FOMO.

According to People, the pair became the center of attention after Lawrence volunteered Adele to play a drinking game onstage in front of the crowd, and many videos of them at the bar were posted on social media shortly afterwards. After being pulled up onto the stage to participate, the singer introduced herself to the crowd as a "stay-at-home mum," before adding that despite being married, she was "ready to mingle" with the crowd. Adele and her husband, Simon Konecki, welcomed son, Angelo, in 2012, and she credits him with inspiring her return to music with her 2015 album, 25.

Despite having plenty of support from the crowd, Adele lost the drinking game, and was promptly teased by her Oscar-winning friend for not coming out victorious. "How could you lose!" Lawrence yelled at one point, according to a video from Twitter user @JoeMichaelII. In response, Adele playfully fired back that Lawrence is "engaged," so "you’re not even relevant to be here!"

"That has nothing to with my drinking abilities," Lawrence joked, earning cheers from the crowd around her. Reports of the actress' engagement to gallery owner Cooke Maroney first broke in early February, and Lawrence gave fans a good look at her ring while attending Paris Fashion Week later that month.

The pair have been inspiring jealousy with their fun friendship since first meeting at the 2013 Oscars, where Adele won Best Original Song for "Skyfall." In an essay for Time magazine written in 2016, Lawrence wrote about their first meeting, recounting, "I remember sneaking backstage while she performed 'Skyfall,' trying to squeeze a ball gown past a pile of ropes and cables just to get a little closer."

"She’s an extremely private person, so I will do my best to honor her privacy," Lawrence concluded her essay in honor of her good friend. "But we all see her success. Her undeniable talent and beauty. But what you don’t see is what a wonderful mother she is. What a wonderful partner and friend she is. That she makes her son’s Halloween costumes. Adele is a gift, an international treasure, but she’s also sweet, funny, intelligent and beautiful."

In 2015, Lawrence and Adele were spotted getting dinner with their mutual friend Emma Stone in New York, and the following year, Lawrence and Stone were spotted having a blast at one of the singer's concerts in Los Angeles. And though Lawrence and Adele were having fun into the wee hours of the morning on Friday, the Hunger Games star told Harper's Bazaar in 2016 that she doesn't often stay out late. "It's hard to get me out, and when I do go out I don't really stay out late," she told the magazine. "If I do stay out late and I'm partying hard, I will throw up. I don't have the tolerance to black out; I just start puking."

"Ask Emma Stone. It was the night we saw Adele in L.A. She just started rubbing my back. She was really sweet. I was like, 'Get out of here. It's so gross," Lawrence recounted about the gross ending to their publicized outing.

Lawrence and Adele's last public hang out went much more smoothly; in January 2018, the singer shared a photo of herself, Lawrence and Cameron Diaz at the Women's March on Instagram. "The most influential people in my life have always been women," Adele wrote alongside the group photo. "My family, my friends, my teachers, my colleagues, and my idols. I am obsessed with all the women in my life. I adore them and need them more and more every day."

Clearly, Lawrence and Adele adore each other just as much as the world adores them — maybe, if we're lucky, we might just get invited out on their next wild girl's night adventure.

More like this
Ben Affleck Wrote A 12-Page-Long Speech For Wedding To Jennifer Lopez, Says Kevin Smith
By Brad Witter and Radhika Menon
Courteney Cox & Jennifer Aniston’s Latest 'Friends' Revival Is Everything
By Darshita Goyal
Jennifer Coolidge's Reaction To The Emmys Cutting Her Speech Off Is Comedy Gold
By Jake Viswanath
Bachelorette Gabby Kissed Her New Fiancé On 'Dancing With The Stars'
By Jake Viswanath
Get Even More From Bustle — Sign Up For The Newsletter