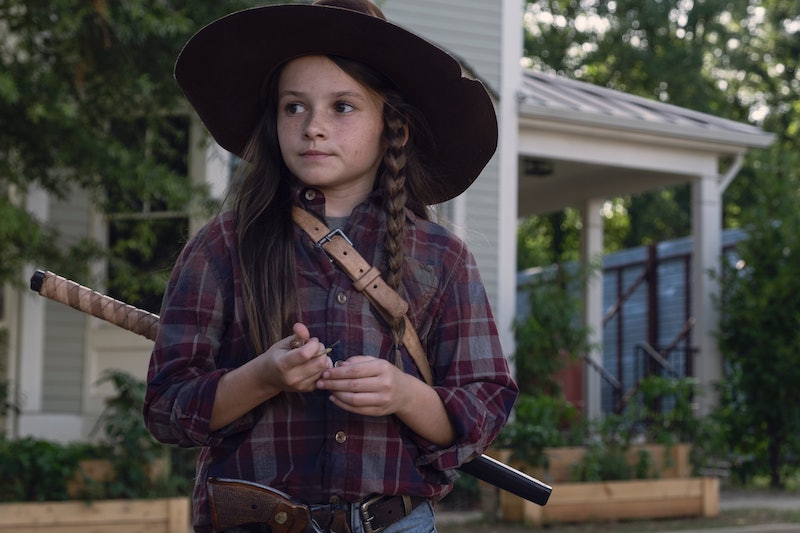 Things are definitely different since Rick Grimes flew away in a helicopter. The show has jumped six years in the future and features a pre-teen Judith rocking her dad's infamous sheriff’s hat and a pair of cowboy boots like her dad. Judith is obviously going to be an important character alongside her mom Michonne, Carol, and Daryl but TV fans might be surprised to learn that Judith died early in the comics.

Like the show, comic Judith was born at the Georgia prison. Lori, who survived labor, wasn’t sure if Judith’s biological dad was Rick or Shane, but Rick chose to accept the baby as his own child. Sadly, she didn’t make it out of infancy after The Governor’s attack on the prison. Lori was running from gunfire while holding Judith when Woodbury resident Lilly Caul shot her in the back, causing her lifeless body to fall and suffocate Judith to death. It was a grim and callous end to their lives that caused tension between Rick and Carl, who blamed his dad for their deaths.

The TV show is now gearing up for the Whisperers arc in which Carl played a pivotal role in the comics. Comic Carl gets a first-hand peek into the nomadic group’s lawless lifestyle and becomes a part of the militia to take them down. Carl also develops a relationship with Negan, who becomes his mentor and friend.

Sadly, TV Carl died in Season 8, but Judith appears to be taking on elements of his comic story. Judith is nine years old (slightly younger than approx. 13-year-old Comic Carl) but she’s definitely not your average kid. In Episode 6, she convinced Michonne to let Magna’s group stay and was seen with Rick's gun and katana. The other Alexandrian kids were out playing, but Judith was on a hunting mission with Eugene, Aaron, and other adults because she's a mini boss.

She was also seen chatting with Negan over math problems, which means they have built a friendship over the time jump. And, the Whisperers were introduced, so Judith may play a role in helping fight this new villain.

But there are elements of Carl’s story that will not work with Judith. He had a romantic relationship with Lydia, the daughter of Whisperer leader Alpha, and he trained as a blacksmith. The show has already done two time jumps this season, so there’s a slim chance that they will age Judith up enough for a love storyline. And, it's unlikely that Michonne will allow her to go live at the Hilltop for apprentice training because she's still a small kid.

If anything, this part of Carl's arc will go to Carol and Ezekiel’s adopted son Henry, who is around 15 at this point. He is set to be a blacksmith’s apprentice and would be the right age to have a love affair with Lydia. But, Henry is extremely annoying so fans aren't thrilled about him becoming Carl 2.0. Showrunner Angela Kang revealed to Comicbook.com that Judith Grimes will be her own character even if she has some similarities to Carl. “She is an apocalypse native,” said Kang. “That makes things a little different than a kid who remembers life before the apocalypse.”

Kang also confirmed that Henry will be taking on elements of Carl’s story, but the show will tweak it to fit his individual personality. Carl can never be replaced, but it will be interesting to see how much of his arc will be given to Judith as she gets older. Comic Judith may have lived a short life and suffered a grim death, but it looks like her TV counterpart is just getting warmed up. The show’s direction is completely up in the air at this point, so fans will just have to wait and see what happens next.