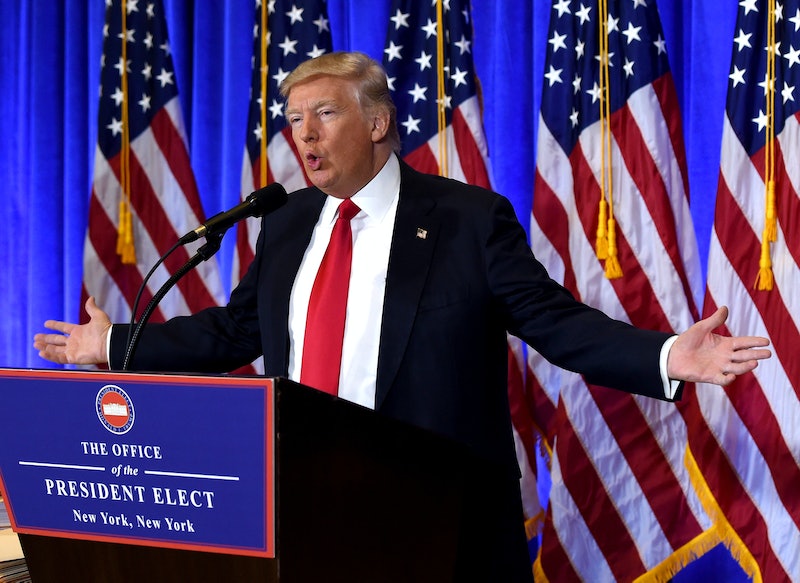 If you're feeling super anxious ahead of Donald Trump's inauguration and/or have been anxious for the past six months, you're definitely not alone. Multiple surveys report that this past election cycle was stressful for most Americans. One in 14 Americans lost friends during last year’s election cycle, and nearly 40 percent of Americans reportedly felt tension with their family members over the presidential race. Trump-induced stress is far from over, though. In fact, since President-elect Donald Trump’s inauguration is scheduled for Friday morning, those of us who didn’t vote for the guy are feeling more anxious than ever.

Fortunately, Dr. Pete Sulack, one of America’s leading stress experts and the founder of StressRX.com, agreed to speak with Bustle about how to cope if the inauguration is stressing you out. Sulack gave me lots of good advice on how to manage inauguration anxiety, but limiting social media use during and after the ceremony is one of his biggest tips. “When we watch the media too much — stay plugged in all the time, the worldwide scope of injustice, war, and suffering makes us feel powerless,” he says. Even more crucial than cutting back on Facebook and Twitter is the importance of acknowledging (and acting on) your very real power to affect change. “We can’t do everything, but we can do one thing. We can’t help everyone, but we can help someone,” Sulack says.

Here’s everything else you need to know about coping with inauguration stress.

Sulack tells Bustle that taking adaptogenic herbs, like Ashwaganda, Rhodiola, and Cordyceps, is one of the best ways to get a handle on your stress levels. "Herbs found in products like StressRX have been scientifically shown to reduce cortisol levels, relieve stress, and restore the body to a calm place of healing and rest," Sulack tells Bustle. So if you have a little bit of extra time and money to work with, give your doctor a quick call and ask about whether it would be safe for you to try some herbal remedies.

If you don't think you'll be able to order StressRx before the inauguration, make yourself a hot cup (or a whole freaking kettle) of calming tea instead. It probably won't eliminate your stress entirely, but it will certainly help. If you're only kind of stressing about the inauguration, I would suggest Celestial Seasoning's Tension Tamer tea. If you're so stressed out about Friday's ceremony that you'd prefer Xanax over tea, then consider stocking up on Yogi's Kava Stress Relief tea. It's the most effective anti-anxiety tea that I've ever tried, and I've tried quite a few.

Limit Your Social Media Use During & After The Inauguration

I don't know about you, but my social media turned into a figurative hellscape during this last election cycle — it is actually the primary reason I've cut way back on my Facebook usage in the past two months. Personally, I don't plan on checking Facebook even once on Inauguration Day. I have no doubt that my newsfeed will be filled with posts about the inauguration, and I know my Facebook friends well enough to know that those posts will either be super-negative or super-ignorant. Either way, I feel like avoiding Facebook will help me protect my peace.

According to Dr. Sulack, I'm on the right track with this. While it's obviously important to be yourself online and refuse to be silenced, it's also true that social media isn't like a real conversation. As Sulack points out, "Social media has no accountability...People make comments on social media that no sane person would say to another human who was sitting or standing next to them."

So instead of scrolling through the countless inaugural Facebook posts and tweets that will definitely be made on Inauguration Day, Sulack suggests spending some time outdoors or trying something new — like an unexplored hobby or a fresh haircut.

Feel Whatever You're Feeling, But Remember That Feelings Change

If you're feeling scared and worried about the reality of a Trump presidency, you should know that you're not alone, and that your feelings are valid. The things Trump has said about climate change, the media, women, immigrants, people of color, and the disabled are legitimately frightening to many people. Further, Trump's cabinet is super-white and super-male, and that's especially discouraging for those of us who are not.

Still, it's important to remember that feelings always change, and fear can be incredibly disempowering. As Dr. Sulack explains it, "Feelings come and feelings go. You can’t base your life on your feelings, or you will constantly be caught up in emotional drama of your own making." So while it makes sense to feel afraid and upset on Inauguration Day, allowing those feelings to consume you isn't healthy. Feel whatever you need to feel about Trump's inauguration, but remember that no feeling is final.

Remind Yourself That You Are Not Powerless

Like so many Americans, I felt violated and heartbroken when I found out that Donald Trump was going to be our next president. After writing and sharing several articles on why Trump sucks, and then voting for Hillary Clinton, I felt like I'd done everything in my limited power to keep a bully out of the White House. So when Trump won anyway, I couldn't help feeling powerless.

I've since remembered that all Americans have the power to effect positive change in this country, and believing otherwise is both counterintuitive and dangerous. So if you're still questioning whether or not you have power to combat the negativity of our current political climate, stop that. Doubting your power will only add to your stress — so no matter how small you might feel on Inauguration Day, remember that you are strong. As Sulack puts it, "It’s important to confront the lie of powerlessness, because feeling victimized triggers the stress response ... We can effect change; but not if we are stressed out, shut down, turnt, or numb."

We've established that it's OK to feel stressed out about Trump's inauguration, but unless something unprecedented happens, we're about to have four years of Trump's America. So if you haven't found effective ways to manage Trump-induced stress yet, now is the time.

Chronic stress can literally make you sick, and it messes with everything from careers to relationships. As Dr. Sulack points out, stress is the underlying culprit behind conditions like high blood pressure, high blood sugar, obesity, hormonal imbalance, chronic fatigue, chronic pain, sexual dysfunction, autoimmune diseases, diabetes, and heart disease. What's more is, prolonged stress can actually damage brain structure and connectivity. So if you haven't done this already, take some time to think about a few healthy ways you can cope with the anxiety of a Donald Trump presidency. In order to fight effectively, we need to also remember to practice self-care.

Stay strong! You're not alone, and we will get through this.