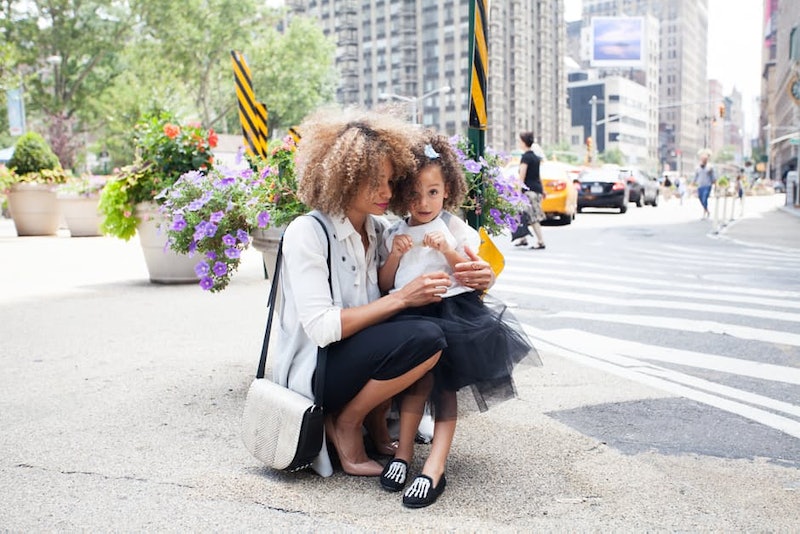 None of my nieces are quite old enough to have political discussions with me, and I’m actually kind of grateful for that right about now. The fact that their parents and grandparents voted for President-elect Donald Trump would make having any post-election conversations with my nieces that much more difficult for me, so I’m happy that they typically only want to talk to me about Dora The Explorer and their pets. That said, I still can’t stop thinking about what to tell young girls in the wake of Hillary Clinton’s loss — because my nieces won’t be this little forever, and I don’t know what their lives will be like in Trump’s America. I worry that the reality of a Trump presidency means my nieces, and all young girls, are going to grow up feeling as unsafe as I've been feeling lately.

Since Trump won the White House, I’ve felt like I’m living in another country. When I pass a group of men, my heart rate speeds up more than it used to — not because of the men themselves, but because America has put an alleged sexual assaulter in the White House. Everything Trump said during his campaign about overturning the Supreme Court’s 2015 ruling on gay marriage (a promise which he’s admittedly flip-flopped on recently) has me feeling unsafe as well. I can’t help but feel relieved that my particular brand of queerness might keep me safer than most in the coming days — but then I feel guilty, sad, and upset that I would absolutely be contributing to bi-erasure by staying semi-closeted (I’ve never "officially" come out to my dad), just because it's easier.

So while I’m trying to stay positive about the next four years, I feel like it’s important that we prepare ourselves, and our girls especially, for anything. In that spirit, here are a few things young girls should hear after this election.

"This Doesn't Mean A Woman Can't Be President"

One of the most devastating things about Hillary's loss is the message it sends young girls about women in leadership. If Hillary had won, little girls everywhere would now know that they could grow up to be POTUS, too. Instead, we all have to face the reality that Americans elected someone many of us feel is a misogynist to govern our great nation instead.

Hillary's loss to a man with zero experience in government proves that we can't honestly tell young girls that all the hard work, determination, and work experience in the world will guarantee them a fair shot at the Oval Office. What we can tell them, however, is that they are still powerful and capable of achieving their dreams and creating real change. We can tell them that the majority of Americans did vote for a female president, and there are more women in the senate now than there have ever been. We can tell them that the number of women of color in the senate has quadrupled because of this election. We can tell them that Minnesota elected the first immigrant, refugee, muslim, Somali-American lawmaker — and she also happens to be a mother to three.

We can also tell young girls that the fight for gender equality in the U.S. has powered through setbacks before. We can remind them that American women had to fight until 1920 just to be given the right to vote. Then we can talk to them about all the small ways we can help further the cause of gender equality in the U.S., while also fighting for women's rights on a global scale — and yes, they can help.

Now that Trump is our President-elect, teachers and parents alike worry about what this means for the safety and wellbeing of their kids during the next four years. As Rolling Stone reported earlier this month, kids appear to be finding new ways to hurt each other, and one of those ways includes threatening to deport immigrant and muslim students. This perceived increase in the bullying of kids from marginalized groups has been dubbed "The Trump Effect," and it could potentially get worse. As Time recently reported, hate crimes have increased in the wake of Trump's win. Moreover, an increase in harassment and bullying has been reported in American schools since Trump's victory last week.

Young girls are more vulnerable than usual right now, which could both put them in danger and encourage them to bully others before they're bullied themselves. So now is the time to talk to them about love, acceptance, and standing up for themselves and their friends.

If Melania Trump actually delivers on her promise to fight cyberbulling in the U.S., then maybe Trump's presidency could eventually cut down on bullying. (Hey, I can dream.) Whether that happens or not, though, girls need to know that bullying of any kind is unacceptable behavior. They also need to know that silence will not protect them or the people they love. Which brings us to...

"Silence Can Be Dangerous, So Don't Be Afraid To Speak Up"

I'm not a parent or a family therapist, so I won't pretend to be an expert on exactly how we should encourage young girls to speak up in the aftermath of this election. Every kid is a little bit different, and you know your kids better than I do. One thing's for sure, though; all kids want to feel safe, and silence often seems safer than speaking out. As all of us grown-ups know, however, silence really isn't safer. It's just easier.

So while you shouldn't lie to the kids in your life about the risks we all take by calling out hatred when we see it, you should tell them that their voice matters, and that you'll do everything in your power to protect them from bad people.

In a world where women are constantly being silenced, it's more important than ever that we teach young girls not to silence themselves. In the likely event that someone starts harassing them and/or their friends in the near future for being female, ethnic, muslim, queer, and/or Jewish, (or they're attacked purely for being an ally) young girls need to be ready to stand up for themselves and the people they love. Young girls need to be taught how to solve conflicts among classmates with firm diplomacy. They need to be told that silence can be dangerous, that love trumps hate, and that assertiveness is nothing to be sorry for.

"It's Never OK For Someone To Touch You Without Your Permission"

Admittedly, this is something we would need to tell young girls no matter who had won the 2016 presidential election, because we live in a victim-blaming rape culture. As the Rape Abuse and Incest National Network (RAINN) reports, every 109 seconds, someone is sexually assaulted in the United States, and every eight minutes, that someone is a child.

Now that Trump has been chosen to run the country, I feel like this conversation is more necessary than ever. America's President-elect has been accused of alleged sexual assault by at least a dozen women, he's literally bragged about sexual assault on tape, and he recently chose well-known purveyor of sexist beliefs, Steve Brannon, as his Chief Strategist. So if you haven't told the young girls in your life that absolutely nothing gives anyone the right to touch them without their express consent, don't wait any longer to make this clear to them.

"You Are Beautiful Exactly As You Are"

Earlier this month, The New York Times and Pollfish teamed up to conduct a survey which included 332 girls ages 14 to 17. When researchers asked the girls how Trump's negative comments about women and women's bodies had impacted them, the results were telling. As Alternet reported just last week: "Forty-two percent of girls questioned said Trump’s comments about women, such as vulgar insults about their looks and weight, have negatively affected how they view their own bodies."

With this in mind, I think it's safe to assume that inspiring high self-esteem among young girls is probably going to be even more difficult and important than ever. Trump's campaign alone had a negative impact on girls' self-esteem — and now the guy is our Commander in Chief. So make sure you tell all the young girls in your life that they are beautiful exactly as they are — and maybe encourage them to adopt a few of these habits for building high self-esteem, too.

I know it might seem like everything is hopeless right now, but confident girls grow up to be confident women — and confident women are pretty much unstoppable. So if you haven't already, take a few moments to talk to the young girls in your life about last week's election results. I know it's a difficult conversation to have, but young girls need the guidance of strong women and men now more than ever.

More like this
At 14, Tatiana Maslany Was Obsessing Over Tamagotchis & The Spice Girls
By Gabrielle Bondi
20 Things You Should Never Tolerate In A Relationship
By Rachel Sanoff and Kathleen Ferraro
An Ultimate Guide To The Music Of 'Rap Sh!t'
By Brad Witter
Is It Bad That I'm Not Interested In Sex Or Dating Right Now?
By Sophia Benoit
Get Even More From Bustle — Sign Up For The Newsletter