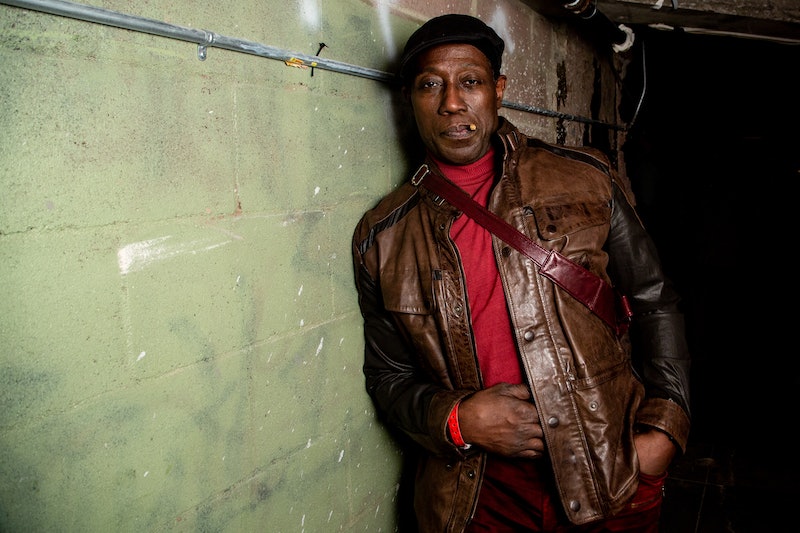 "Chillaaxx," Blade fans. That was the message Wesley Snipes had in response to Mahershala Ali's Blade casting. At Comic-Con, Marvel announced they're rebooting Blade with Ali as the half-vampire who also hunts vampires. However, fans felt replacing Snipes, who originated the role in 1998, followed by two sequels, Blade II and Blade: Trinity, was disrespectful. Especially, since Snipes had recently talked about wanting to return for Blade 4. But, Snipes is all good with the new casting and wants his fans to feel the same.

In a statement to Comicbook.com, Snipes wanted to let everyone know they need to calm down over the Marvel news. “To all the DAYWALKERS losing their minds right now, chillaaxx," he said, referencing Blade's nickname since, unlike others vampires, he can withstand the sun. "Although the news comes as a surprise, it’s ALL GOOD," he added. "Such is the ‘business’ of ‘entertainment!’ Much peace to the MCU crew - always a fan."

Snipes then shouted out the "grandmaster Stan" Lee and congratulated Ali, "a beautiful and talented artist whose expressions I look forward to experiencing for many years to come. Inshallah, we will someday work together.

"Most importantly," Snipes stated at the end of his comments. "to my loyal fans, the incredible outpouring of love is overwhelming. I am grateful for the never-ending support. So, ‘nah fret nah worry, it’s not de end of de story.’ Welcome to the Daywalker Klique.”

Ali has also shown his respect for Snipes, who, with Blade, became the first successful Marvel movie hero way before the MCU was a thing. On Instagram, Ali posted a photo of Snipes as Blade, whose real name was Eric Brooks. He let the emoji say it all: a crown. It let fans of the series know he respects Snipes as much as they do.

This new Blade is reportedly part of Phase 5 of the MCU. This means, it won't come out until 2022, at the earliest since Marvel has some other projects they have to get to first. Phase 4 of the MCU includes a Black Widow movie and Thor: Love & Thunder starring Natalie Portman, who isn't "Female Thor" but Mighty Thor, thank you very much.

At Comic-Con, Marvel president Kevin Feige told The Hollywood Reporter that it was Ali who asked to play the vampire hunter. "When Mahershala calls, you answer," Feige said. "At the meeting, Ali came right out and said that he wanted to do Blade. That was that."

While Ali seems like a good choice to play the all-black-wearing hero who wants to rid the world of vampires, fans hope that Snipes will make a cameo in Blade. Even Snipes has hinted he'd like to join the MCU in some capacity. "There are other characters in the Marvel universe that, if they want to invite me to play around with, I am with that too," Snipes told THR last year in a piece about his Black Panther movie that never happened.

Snipes' relationship with the MCU goes way back. So, Marvel, pick up the phone, Snipes is definitely looking forward to hearing from you.