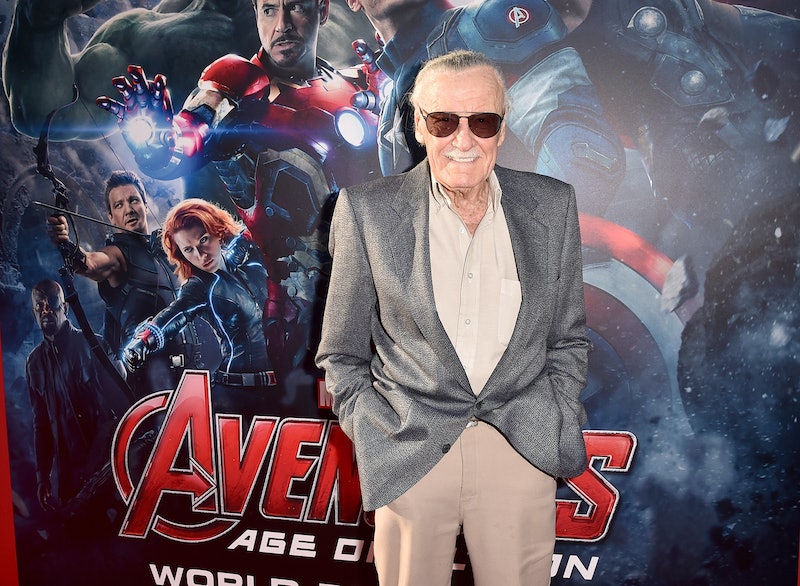 While the world mourned the loss of Stan Lee back in November 2018, fans of the Marvel Cinematic Universe should prepare to say goodbye to the comic book creator all over again. The Russo Brothers confirmed to Mashable in an interview published on Sunday, April 14, that Avengers: Endgame would include Stan Lee's last cameo. Lee, a founder of Marvel Comics, left behind a massive legacy, and part of that was his cheeky cameos in every Marvel film. And so, following his death, fans have been curious about what future cameos by Lee would look like. On Sunday, the directors of Endgame, brothers Joe and Anthony Russo, confirmed that Lee's final filmed cameo will appear in the follow up to Infinity War when it hits theaters on April 26. And although there's no doubt that Lee's last cameo will be emotional, Endgame is a fitting movie for this farewell.

The 95-year-old Lee died in 2018, but he continued to pop up on the big screen the following year thanks to his Mallrats-themed cameo in the '90s-set Captain Marvel. And it wasn't a secret that Lee's cameos weren't over yet, since the president of Marvel Studios, Kevin Feige, confirmed Lee would be in Avengers: Endgame. But with Spider-Man: Far From Home set to hit theaters on July 5, 2019, and Feige telling Entertainment Tonight that they had "shot a couple" of other Lee cameos, it wasn't clear that Endgame would be the, well, end of Lee's appearances. But according to co-director Joe, Endgame will mark the end of an era in a number of ways. "It's his last one committed to film," Joe told Mashable about Lee's cameos.

The Russo brothers have helmed four movies in the Marvel Cinematic Universe — Captain America: The Winter Soldier, Captain America: Civil War, Avengers: Infinity War, and Avengers: Endgame. While Thanos made half the population disappear in Infinity War, Endgame will still feature characters from Marvel movies like Ant-Man, Black Panther, Doctor Strange, and Guardians of the Galaxy, along with the main Avengers crew. So if you were already getting weepy at the thought of these superheroes uniting to save humanity, knowing that this will be the last official Lee cameo will leave you even more emotional.

Anthony spoke to Mashable about the enjoyment that Lee's cameos brought to the set of these blockbusters. "We have all these movie stars on that set, and when Stan came to set, everybody would be like kids again," Anthony said. "It was always a lot of fun shooting these cameos because he was very charming, and he would maybe get the crew going, and everybody would be laughing and having a good time."

The fact that the timing of Lee's death just happened to line up for the end of this Avengers arc, which Marvel has been building up to since Robert Downey Jr. hit the screen as Iron Man in 2008, isn't lost on the directors. "I have to say, I think it's astonishing that this would be his last cameo," Joe told Mashable. "It's just kind of mind-boggling that he made it to the end of this run. I can't believe it."

Still, while Endgame might be the end of Lee's cameos in the traditional sense, don't count Lee out just yet. Marvel could potentially use old footage of Lee in future movies, like Black Panther 2 or Guardians of the Galaxy Vol. 3. There's also the option to use an animated version of Lee for cameos or tributes, like was done for Spider-Man: Into the Spider-Verse, and is particularly perfect for a man who created comic books.

Considering the future of Marvel is a bit of a mystery right now, how Lee could appear in upcoming projects is a big question mark. It's likely that Lee will show up again in some form or another, but his last true cameo, it seems, will occur in Endgame — and it's a sendoff so epically right that even the best comic book writers couldn't have scripted it.