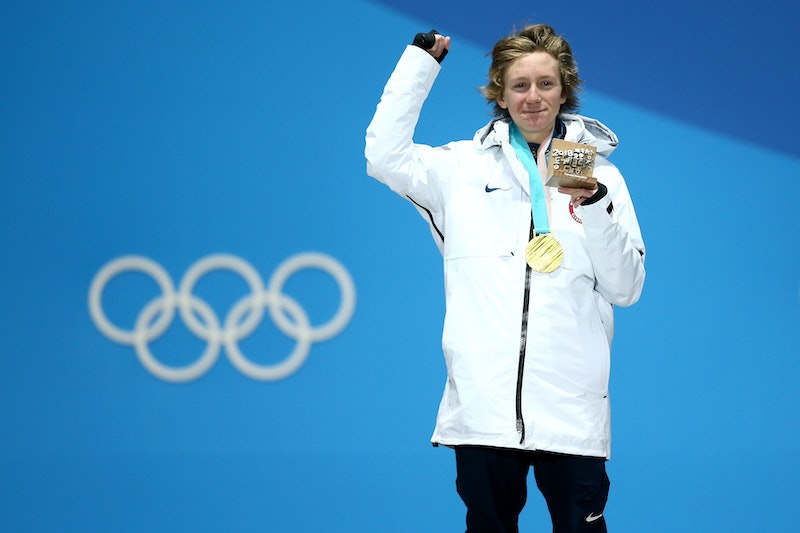 "Holy sh*t," Red Gerard proclaimed in shock on Saturday as he realized he had won the United States' first gold medal of the 2018 PyeongChang Games. When the 17-year-old was officially awarded his hard-earned medal, photos showed him also holding another small wooden object. As it turns out, Olympic medalists are holding some special gifts that they receive on top of their shiny medals.

The small gift Gerard showed off on Saturday was a wooden depiction of the PyeongChang mountains, featuring “PyeongChang 2018” written on it in Korean. Medalists also receive a more cuddly gift: a stuffed tiger portraying the Winter Games' mascot, Soohorang. The memorabilia isn't only for the gold medalists, either — anyone who medals at the games will take home both presents to commemorate their victory. The black-and-white tigers are adorned with a hat matching the color of each Olympian's medal, as have "PyeongChang 2018" written on the stomach.

A stuffed animal is a deviation from the traditional bouquets that are presented to Olympic medalists, but they'll last much longer than fresh flowers (and be able to travel internationally). The 2016 Rio Games were the first to switch up medalists' gifts, awarding winners with small sculptures that were similar to the wooden mountains given to medalists in PyeongChang.

Still, the stuffed animals' design does recognize the Olympic tradition of presenting medalists with flowers. Each tiger dons "Uhsahwa," or "a paper flower that was bestowed to those who passed national exams during the Joseon Dynasty (1392-1910)," according to the PyeongChang 2018 website.

Winners actually receive this stuffed animal before ever getting their medal. As is Winter Olympic tradition, all medals won in a given day are awarded at a nightly ceremony. So, rather than make medalists wait hours to receive any recognition at all for their impressive athletic feats, they get an adorable stuffed animal as soon as their event concludes. This process is different at the Summer Olympics, largely because the sheer number of events makes it easier just to award the medals right away.

The tiger mascot makes a fitting gift, since Soohorang is all over the PyeongChang Games. Tigers are also symbolic in Korean culture, and the mascot's name carries its own significance. As the PyeongChang 2018 website explains:

“Sooho”, meaning protection in Korean, symbolises the protection offered to the athletes, spectators and other participants of the 2018 Games. “Rang” comes from the middle letter of “Ho-rang-i”, the Korean word for “tiger,” and is also the last letter of “Jeong-seon A-ri-rang”, a cherished traditional folk song of Gangwon Province, where the Games will be held.

Soohorang is one of the cuter aspects of the 2018 Winter Games, especially when compared to 2016's Vinicius mascot and 2012's just-plain-confusing Wenlock character. On top of being adorable, the PyeongChang 2018 website says Soohorang also "has a challenging spirit and passion, but is also a trustworthy friend who protects the athletes, spectators and all the participants of the Olympic Games."

Paralympic medalists will receive a similar stuffed animal portraying those games' mascot when they compete in PyeongChang next month. Named Bandabi, the Paralympic mascot is an Asian black bear, the symbolic animal of Gangwon Province that represents strength and courage. The toy Bandabis will have Uhsahwa to maintain the Olympic flower tradition as well.

If you tune into any Winter Olympic events, you'll likely see athletes showing off their stuffed animals in victory. Watching the nightly medal ceremony is little tricky, however, as the time difference means those events happen bright and early in the morning for U.S. viewers. But, don't worry: You can always catch a recap to see medalists beaming with pride as they wave their gifts in the air.

The Incredible Meaning Behind The Design Of The Winter Olympics Medals

Turns Out, Some Olympians Actually DON’T Keep Their Medals After The Games