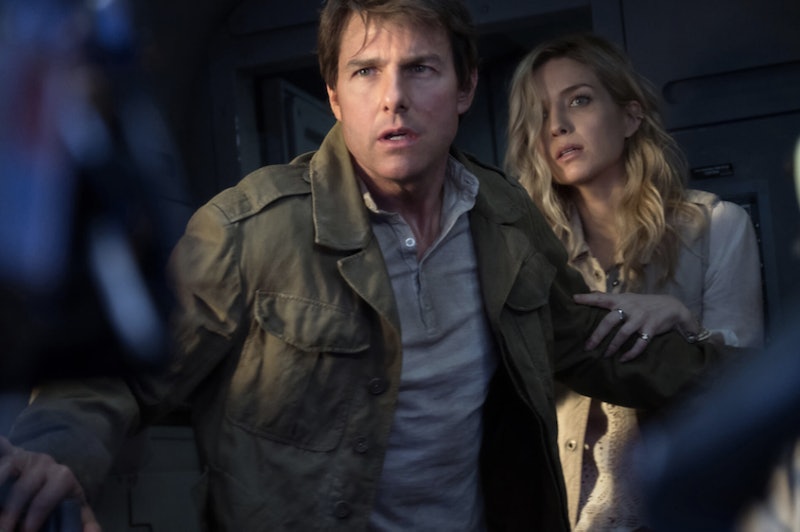 Perhaps a more fitting title for the new The Mummy reboot would have been Tom Cruise, since the actor is without a doubt the main star and focus of the film. Sofia Boutella's titular undead Egyptian is great, but the movie's plot is much more concerned with the arc of Cruise's character, Nick Morton. So much so that the movie even ends on a bit of a cliffhanger, teasing the character's return in a future film now that he's transformed into... something. So what does Nick become at the end of The Mummy? Spoilers to follow.

Well, he definitely doesn't become a mummy. For anyone thinking that the movie was going to somehow pull the rug out from under the audience and have Cruise take Boutella's place as the embalmed baddie, that's not what happens — but it's not that far off. The plot deals with Princess Ahmanet, a 5,000-year-old Egyptian royal who made a deal with Set, God of the Dead, to gain power over Egypt after her father had a son, robbing her of her inheritance. She killed her father, his wife, and her little brother, and was set to sacrifice her "chosen" man to become a vessel for Set on Earth so they could rule together. But soldiers intervened and killed her chosen before she got the chance, and then buried her alive.

5,000 years later she's woken up by Nick, who unwittingly becomes cursed as her new chosen. During the film's climax, Nick defeats Ahmanet by deciding to become a vessel for Set himself — without letting her perform the ritual on him — transforming himself into some kind of monster with sharp teeth and dark eyes, but otherwise looking a lot like Tom Cruise. And although he has evil urges thanks to Set residing in his body, Nick is able to resist these urges and emerge a hero. At the end of the film, it's made clear that this new Nick/Set hybrid is meant to be the hero of the fledgling Dark Universe franchise — which will eventually grow to include Frankenstein, the Wolfman, Dracula, etc. — thanks to Russell Crowe's (playing Dr. Jekyll) voiceover proclaiming, "sometimes it takes a monster to defeat... monsters." So Nick turns into a monster, but there's probably more to it than that.

There's nothing in the film that directly sets this up, but some fans believe Nick may have turned into a new version of the famed monster-hunter Van Helsing. The main evidence for this lies in the history of Universal's plans for this new franchise, which began in 2012. Originally, the first films announced were a reimagined Van Helsing reboot — which would star Cruise in the lead role — as well as a Mummy reboot. Then, in 2015, Cruise left Van Helsing, only to quickly return to the franchise as the star of The Mummy. With Nick Morton transforming into a superpowered monster-hunter at the end of The Mummy, it seems quite likely that Cruise found a way to play his reimagined Van Helsing after all.

I can't confirm that Nick Morton is Van Helsing, only that he has Set inhabiting his body. But in looking at the Dark Universe as a whole, it's clear they're setting up Nick as their big monter-hunting hero — and there's no bigger monster-hunting hero out there than Van Helsing.