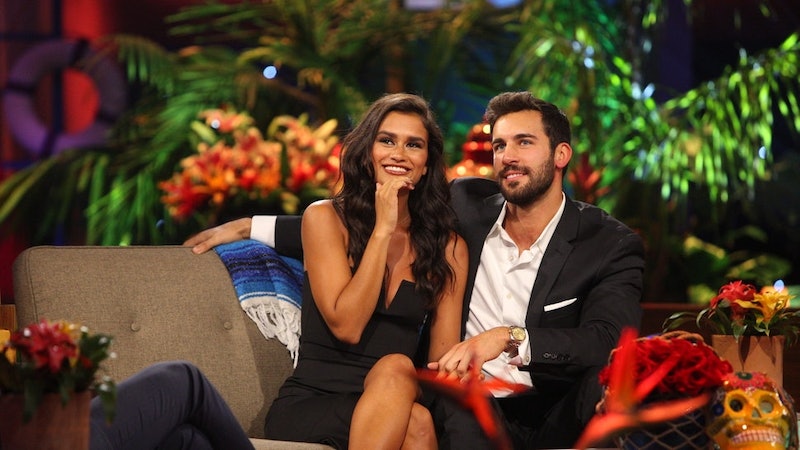 This time two years ago, Taylor Nolan and Derek Peth were falling in love on Bachelor in Paradise. But after the two broke off their engagement in June 2018, Derek is back on the beach for Season 6. He hasn't said too much about Taylor on the show, but watching an ex-fiancé dating again seems like it would be at least a little awkward. So how it is for her? What does Taylor think of Bachelor in Paradise?

Fortunately, it sounds like she's taking a pretty positive approach. When the show premiered earlier this month, Taylor took to Instagram to reflect on her experience — including the fact that, if she chooses to watch BIP this season, it means seeing her ex with other women.

"@bachelorinparadise is a really special place and I'm thankful for the memories and relationships I made while I was there.⁣⁣⁣It's never easy putting yourself out there. Dating is weird and even more so trying to do it after doing it on reality tv. Whether love is found on Paradise or not, it's an opportunity to meet new people and reflect on yourself. I learned SO MUCH from my experience there and I still cherish those lessons today."

She went on to say that although watching won't be easy, her fans are already showing her so much support.

"This season will definitely provide its own triggers and opportunities to reflect, and my heart is so warm by some of the messages you've been sending me," she wrote. (Bustle reached out to Taylor for further comment, but did not receive a response by the time of publication).

This isn't the first time that Taylor has opened up about this season of BIP. On her podcast, Let's Talk About It With Taylor Nolan, she admitted that she wasn't sure if she'd watch the show, even though she was "curious" knowing Derek would be there.

"I don't know if it's a smart decision to invite that stress and anxiety back in my life, because it's not just this fun form of entertainment, it's watching someone that I was in deep relation with and tried really hard with and didn't work out," she admitted.

She also said that seeing Derek cry in the trailer was a lot for her, which makes total sense — they were engaged, after all, and it seemed like they only broke up because their lives were so different, not because they necessarily stopped loving each other.

"That cry was so familiar. It's so strange. It takes me right back to that, she said, adding "I'm sure it was very emotional for him just to be there. let alone to try to pursue a relationship or something."

Whether she ends up watching or not, Taylor seems happy with her new boyfriend, and the Instagram posts she shares about him are really sweet. Hopefully, if she does decide to tune in, it'll be because she feels it will be a good, healthy decision for her.