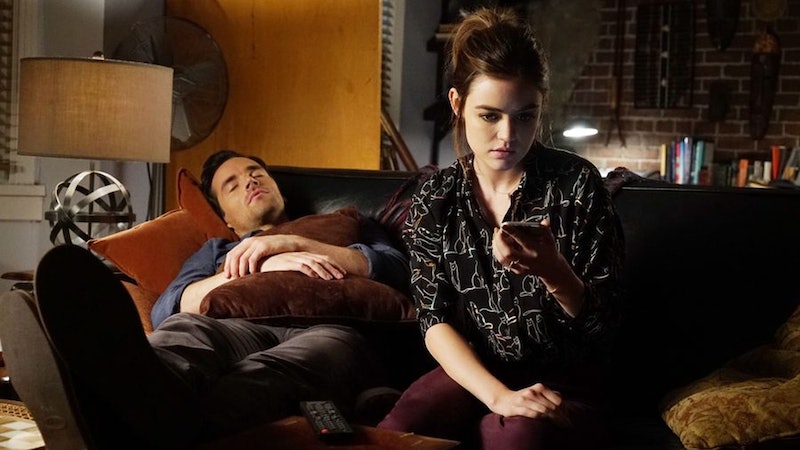 Some of the Liars may have moved out of Rosewood, but thankfully, the Pretty Little Liars spinoff is always willing to keep fans updated on what their favorite characters have been up to since the end of the show. And this week, fans got some major updates about their favorite PLL couples. Pretty Little Liars: The Perfectionists revealed what Aria and Ezra are doing now, and their love story remains as touching and perfect as ever.

On Thursday, March 28, just a few days after the first episode of the long-anticipated spinoff premiered on Freeform, Pretty Little Liars tweeted some "leaked text messages" from Alison (Sasha Pieterse), who checked in with her former bestie Aria (Lucy Hale) after a major life event. In exciting news for Ezria fans everywhere, it turns out that after getting married in the series finale, Aria and Ezra (Ian Harding) are now new parents. "We're calling her Katherine Ella," Aria revealed in the "texted." Fans will recognize the name as a touching homage to her mother, Ella Montgomery (Hollie Marie Combs).

Of course, while PLL may have ended in 2017, there are still plenty more exciting reveals for fans. These same "leaked texts" revealed that Aria's bestselling solo novel, Park Avenue, is being turned into a movie, which will be produced by none other than Reese Witherspoon. While it's hard to imagine that the Oscar winner will make a cameo on The Perfectionists, it is nice to know that the Liars are still close enough for Aria to invite Alison — and the rest of their friends — to the New York premiere of the movie based on her book.

The exciting Ezria reveal is just one of several updates that The Perfectionists has provided fans about the characters from Pretty Little Liars. During Wednesday's episode, Mona (Janel Parrish) called her best friend Hanna (Ashley Benson), and the phone call revealed that Spencer and Toby (played by Troian Bellisario and Keegan Allen) are still going strong.

"What do you mean Spencer and Toby eloped? Even you didn’t know?" Mona was heard asking her BFF, before noting that she wanted to help the newlyweds celebrate. "Are they registered somewhere? Of course I want to get them a gift!"

The same episode also let PLL fans know that Hanna — who was pregnant with Caleb (Tyler Blackburn)'s baby in the series finale — had given birth, and was enjoying life as a new mother with her longterm love. Though the show didn't offer any insight into her career as a fashion designer, fans can assume that she's still thriving in the fashion industry.

Sadly, though, not all of the Liars are enjoying a happy ending after Pretty Little Liars: Mona returned to the United States after Alex and Mary Drake (Bellisario and Andrea Parker) escaped her clutches in Europe, where she was holding them hostage. After all, it's not Pretty Little Liars without a few good kidnappings.

And though Alison moved to Oregon in order to take an exciting new job, her relationship with Emily (Shay Mitchell) is somewhat strained after Alison gave birth to the twins that Alex Drake impregnated her with in the Season 7. "Alison and Emily will always love each other. They have these two beautiful babies together. It's complicated," Pieterse told TV Guide about the couple's relationship status in The Perfectionists.

"Life is complicated, and I think piecing themselves and each other and their world back together since A happened is difficult," she continued. "It's very clear that Alison loves Emily and the babies. I think both Emily and Alison need time to process their life and I think that's what it is." However, Mitchell told TV Line that scheduling conflicts were keeping her off of the PLL spinoff, so it's entirely possible that Alison and Emily could work things out in the future, and the actresses could be together onscreen once more.

In the meantime, at least fans can take comfort in the fact that The Perfectionists will deliver plenty of answers about the Pretty Little Liars characters — even as it unravels a brand new mystery for Mona and Alison.